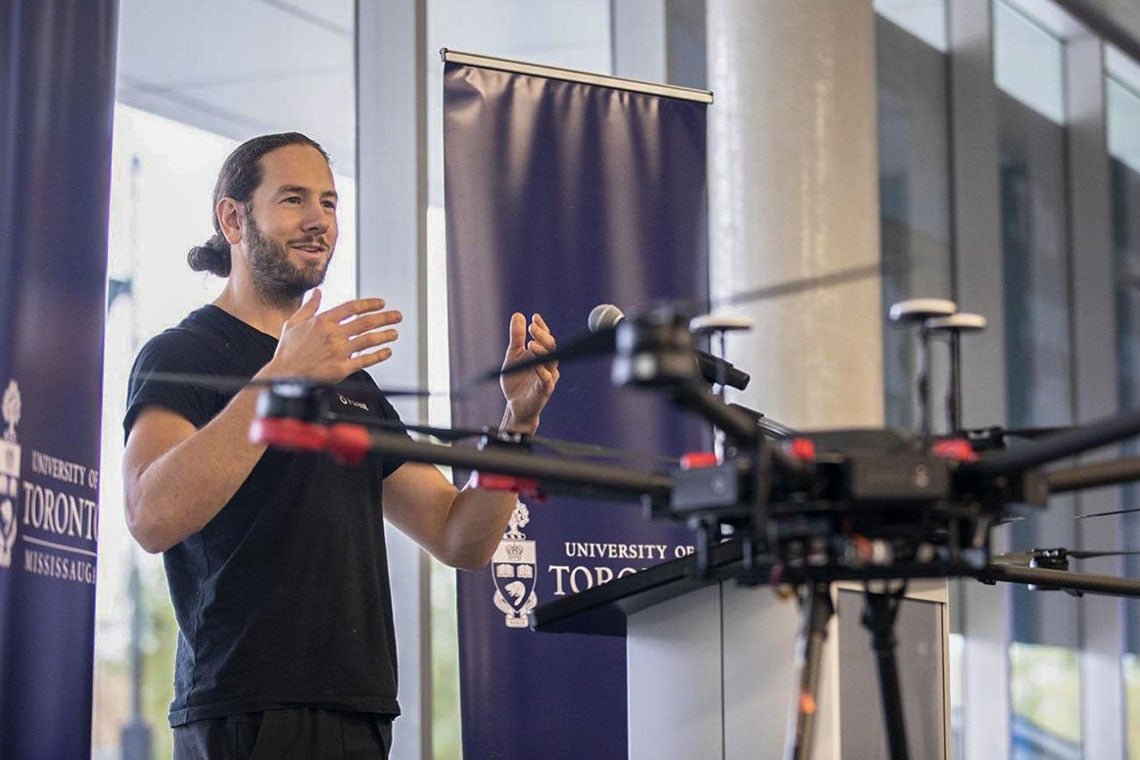 Bryce Jones is the co-founder and CEO of Flash Forest, which has secured $1.35 million from Natural Resources Canada to help reforest wildfire ravaged sites across Canada (photo by Nick Iwanyshyn)

A Mississauga-based startup with ties to the University of Toronto Mississauga has received a federal contract under the 2 Billion Trees program to help boost reforestation efforts in areas devastated by wildfire while also combatting the effects of climate change.

As part of a $1.35-million contract from Natural Resources Canada, Flash Forest will use drones to plant more than one million trees over the next two years in wildfire-ravaged locations across Canada.

The startup’s drones can reach hard-to-access areas and plant trees 10 times faster at a fraction of the cost of conventional methods – and on a larger scale.

Co-founder and CEO Bryce Jones underscored the importance of such work by recalling the 2003 Okanagan Mountain Park fire that consumed over 25,000 hectares of forest and parkland in Kelowna, B.C., where he lived at the time.

“Twenty years later there’s no forest left,” he said. “It’s because we missed the opportunity to reforest the site.”

The contract with Flash Forest – which uses aerial mapping software, drones, automation and advanced seed pods to rapidly seed wildfire-affected sites – was recently announced at U of T Mississauga.

“As we know, climate change is the world’s most pressing challenge as global temperatures rise,” said Mississauga East-Cooksville MP Peter Fonseca, who was joined by Mississauga-Erin Mills MP Iqra Khalid at the event.

Climate change, Fonseca continued, is making wildfires more severe and frequent, noting that this year alone wildfires have destroyed thousands of hectares of forest in Newfoundland and Labrador, Yukon, British Columbia and Ontario.

“There’s no question that the need for more responsible stewardship of our planet is urgent. There’s no time to waste, especially as we look to achieve net zero by 2050,” Fonseca said. “By using drones, we can plant more swiftly, efficiently and effectively, making it easier to grow our forests, clean our air, support important habitats for wildlife and restore valuable ecosystems.” Jones said that Flash Forest, which he co-founded with his brother Cameron, is focused on restoring severe wildfire sites where the seed pods and cones are lost and “the forest really needs a hand” to regenerate.

He added that he used to plant trees the traditional way – with a shovel and a few hundred saplings – but wanted to get involved with climate technology. The big question, he said, was how reforestation could be automated.

“You really can’t do it from the ground. You can’t do it with robots on the forest floor – there are too many objects and snags and obstacles,” he said.

But, he realized, it could be done from the air. Drone technology was already available, with recent advancements allowing for larger payloads and longer ranges, creating a whole new set of applications, including within forestry. Using drones for reforestation efforts is highly scalable and could have a significant impact toward mitigating climate change. Shortly after Flash Forest was launched in 2019, the founders turned to U of T Mississauga’s ICUBE incubator for support. Jones said ICUBE, which specializes in social entrepreneurship, assisted Fast Forest with funding and helped them bolster their research. That includes providing the founders access to U of T’s greenhouse, where they conduct the bulk of their research and development on their seed pods and germination. Fast Forest also hires undergraduate, graduate and post-doctoral reseachers from U of T Mississauga.

Alexandra Gillespie, U of T vice-president and principal of U of T Mississauga, said the university is well-suited to support the kind of work undertaken by Flash Forest.

“We lead Canada’s largest, most diversified, and most integrated network of robotics and AI talent, who show the power of enabling technologies and transform multiple fields at once: from health care and mobility to sustainability and green economies,” she said, adding that U of T has created an entrepreneurial community that has earned more than $1.5 billion in investment over the past 10 years.

One of Flash Forest’s goals is to plant one billion trees by 2028, reaching areas that would otherwise not be reforested. The contribution from Natural Resources Canada is also creating jobs for Canadians. The company, which currently employs 30 people, is expected to double its workforce over the next two years. Jones said he anticipates employing hundreds, if not thousands, in the future.

“It’s a dream come true. It’s something we’ve been pushing for,” Jones said. “We intend to have [Natural Resources Canada] as a long-term partner.”