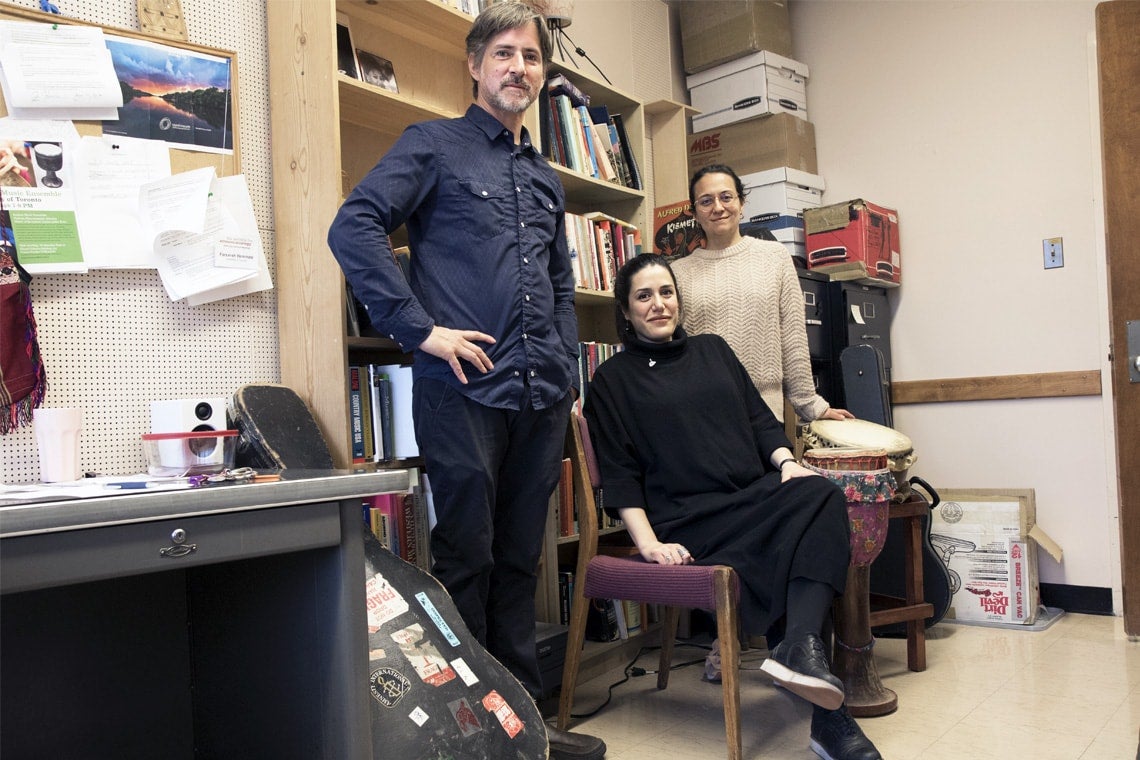 Faculty of Music members, from left to right, Joshua Pilzer, Nasim Niknafs and Farzaneh Hemmasi organized a concert that promotes diversity in the face of prejudice (photo by Romi Levine)

As they watched horrific world events unfold, U of T Faculty of Music members Farzaneh Hemmasi, Nasim Niknafs and Joshua Pilzer were finding it hard to sit idly by.

Donald Trump had been elected as U.S. president. Alt-righters were gaining prominence globally. And close to home, there was the attack on the Quebec City mosque.

“Those things, all together, made us feel like a response of some kind was necessary, and that we didn't want to let those very disturbing events go uncommented upon,” says Hemmasi, an assistant professor of ethnomusicology.

Instead of taking their anger and frustration to Twitter and Facebook, they decided to respond through music. They rounded up a group of performers of diverse cultural and musical backgrounds for a concert, called “Sounding Together, Standing Together,” which takes place Monday April 24 at the Hart House Music Room.

“We started to evolve this idea that we could be doing something we had been trained to do, to specifically respond to the wave of racism and various phobias that have been surging,” says Pilzer, an associate professor of ethnomusicology.

The concert repertoire has everything from jazz duets to Egyptian folk songs.

Hussein Janmohamed, a PhD student in the Faculty of Music, will be performing with Awaaz Ensemble, a group of singers who have specialties in a wide-range of musical genres including western classical and Arabic.

“We come together to sing music that explores the conversations among cultures in Canada. We root each piece of music in a specific cultural context,” he says.

For Janmohamed, who is Muslim, the concert is a way of addressing the misrepresentation of his faith by media and politicians – and a response to events like the U.S. travel ban on a number of Muslim-majority countries.

“To participate in this concert is important to bring forth an expression of the faith that counters and stands up towards the negative representation, and provides a peaceful voice of Islam, which is the Islam that I know that's practiced by a quarter of the world's population,” he says.

Concert organizers say students and faculty members in the Faculty of Music have been affected by the U.S. travel ban. That includes Niknafs who was born and raised in Iran and holds an Iranian passport.

“I had to go through emotional violence again,” says Niknafs, an assistant professor of music education. “Going across the border has always been an issue for me regardless of the country. Being an Iranian, you happen to be savvy about politics around you all the time.”

While music doesn’t instantly heal the emotional wounds caused by prejudice, it can bring people together to start a conversation, says Pilzer.

“Being musical, listening to music is an act of listening, and so there's potential for listening, for understanding, for a kind of communication,” he says.