Some like it hot: U of T PhD student’s research takes him to active volcano in New Zealand 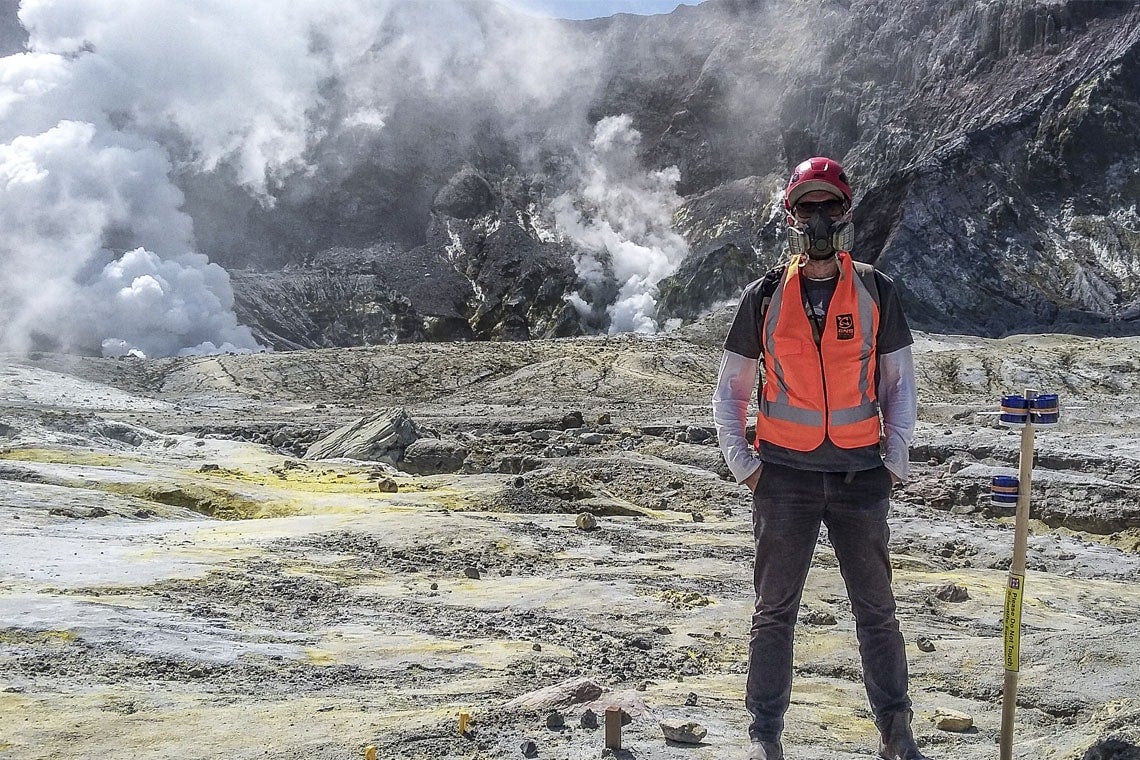 David McLagan’s research has taken him to some interesting places, but going to an active volcano tops the list.

“I’ve never been to a place quite like it,” says McLagan, who needed to deploy a series of passive air samplers on White Island, an active volcano 48 km off the coast of New Zealand’s North Island.

The U of T Scarborough PhD candidate is working on developing passive air samplers that can monitor mercury concentrations in remote locations.

Working under the supervision of U of T Scarborough Chemistry Professor Frank Wania and Associate Professor of Environmental Sciences Carl Mitchell, McLagan is looking at monitoring mercury in the air since it can last in the atmosphere for around a year, can be transported great distances and is linked to a host of brain and nervous system disorders.

New Zealand’s White Island, which spews out huge amounts of gas, is open to tourists but is only accessible by helicopter or boat.

McLagan received funding for the research trip from U of T's Centre for Global Change Science (CGCS). In planning the trip, McLagan connected with GNS Science, a local public-private research organization that monitors volcanic activity on the island and across New Zealand. Along with crucial logistical support, GNS also provided extensive training on how to do research safely.

Masks are necessary to avoid passing out from noxious vapours continuously being vented. In addition to hard hat and boots, walking with a prodder was also important to avoid soft spots in the ground that can burn feet.

There’s also the ever-present risk of eruption, but McLagan felt reassured by the team at GNS who take extra precautions. They aren’t allowed to travel to the island if any unusual seismic activity is recorded, even if it’s deemed safe for tourists. The island was also once home to a sulfur mine where an eruption in 1914 killed all of the miners working there.

While in New Zealand, McLagan also deployed his air samplers at another site called Craters of the Moon, the largest geothermal field in the country. The site gets its name from its unearthly appearance, one that is barren yet bright with constantly shifting ground and endless steam vents dotting the landscape.

Since there’s no electricity in these remote locations – nor is it possible to supply tanks of argon gas that active air samplers rely on – the passive air sampler developed by McLagan uses the natural movements of air and a carbon material to capture mercury in the atmosphere.

As it works its way into unoxygenated sediments, the mercury can be transformed into methylmercury, which is the most toxic and concerning form from a human health perspective. A neurotoxin, it can affect fetal and infant cognitive development.

Another study by McLagan took him to a shuttered mercury mine in Italy to measure concentrations in the buildings and surrounding area. Emissions from this mine remain a concern because it’s located close to the community of Abbadia San Salvatore in Southern Tuscany.

He also witnessed small droplets of liquid mercury on the ground inside old mining buildings.

“In terms of exposure, there is a lot of mercury there so I wouldn’t want to spend a lot of time in those mining buildings,” he says. “We’re careful not to spend more than five minutes or so.”

While mining for mercury is no longer allowed in most parts of the world, McLagan says there’s been a rise in emissions from small-scale gold mining operations in the developing world.

He adds while active air sampling of mercury is common in affluent countries in the northern hemisphere, there are fewer than ten remote sites in the southern hemisphere that are currently monitoring mercury. The ultimate goal of his research, he says, is to help resolve these spatial imbalances that exist in mercury monitoring across the globe.

“Being able to go to these places and collaborate with researchers from around the world, it’s just a great professional and personal experience.”