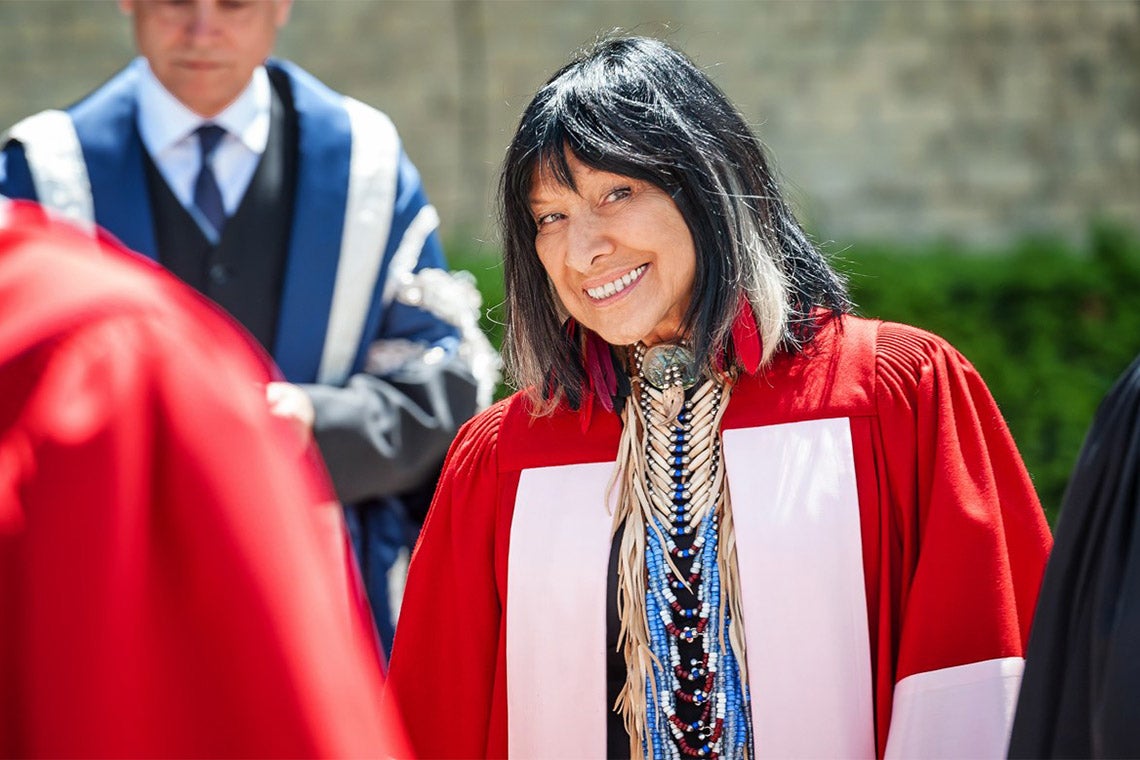 Buffy Sainte-Marie has made her mark on the music scene in Canada and the U.S. since the 1960s (photo by Lisa Sakulensky)

She’s won an Oscar, appeared on Sesame Street and her songs have been covered by everyone from Elvis Presley to Janis Joplin. Her music was even blacklisted by the U.S. government in the 1960s.

Buffy Sainte-Marie’s incredible career spans five decades – and she shows no indication of slowing down.

Today, she will be recognized by the University of Toronto with a Doctor of Laws, honoris causa, for her “excellence in the arts, as a singer-songwriter, actress and visual artist, as well as for her outstanding service for the public good as a lifelong advocate for the rights and dignity of all people.”

The Cree singer, activist and philanthropist was born on the Piapot Cree First Nation reserve in Saskatchewan’s Qu’Appelle Valley, but was adopted as a baby and grew up in Massachusetts.

Music was in her blood from the time she was a toddler, when she taught herself how to play the piano. Her musical talent continued to take shape, eventually leading her to New York City where she was a fixture of the Greenwich Village folk scene.

Sainte-Marie began making waves in 1964 with the release of her first album, It’s My Way. The record included the song “Universal Soldier,” which became an anti-war anthem during the Vietnam War.

“The songs that I was writing, I thought people sort of ought to hear, but also deserve to hear, because I knew I was reflecting some points of view that weren’t being verbalized, but they were felt by fellow students,” Sainte-Marie said about her first album in a 2009 interview with Democracy Now.

Making politically charged music in the1960s came with consequences. Since Sainte-Marie was a figure in the anti-war movement and an advocate for Indigenous issues, particurlarly during the early years of her career, the U.S. government reportedly put pressure on radio stations to blacklist her music. She only found out she was censored when she was able to access FBI files in the 1980s.

Sainte-Marie’s accomplishments have been recognized nationally and internationally. Her accolades include an Oscar for the 1982 song “Up Where We Belong” – the theme to the film An Officer and a Gentleman – induction into the Canadian Music Hall of Fame and Canada’s Walk of Fame, an Order of Canada recognition, a number of Junos, a Polaris Music Prize and honorary degrees from colleges and universities across North America.

Connecting with Indigenous communities across North America has been an important part of Sainte-Marie’s life and career. As her star rose, she gave back to those who needed money and resources more than she did.

In her mid-20s, she founded the Nihewan Foundation for Native American Education, an organization that provides scholarships, curriculum development and resources to help Indigenous students participate in the education system.

“I really set out to address the problem I saw in Indian country, where Indian kids would graduate from high school, want to go to college, but didn’t know how to negotiate the path to college. They didn’t know how to get a scholarship, they weren’t connected by family and friends,” she told Vogue Magazine in 2015.

Sainte-Marie’s regular role on Sesame Street set out to educate a wider audience about Indigenous Peoples and culture – stressing the importance of representation in film and television and providing kids with “positive realities, before racism and stereotyping ever had a chance to set in,” she wrote on the website for a teaching project she founded.

During a commencement speech she gave in 2012, she had the following advice for students that holds just as true for U of T’s class of 2019:

"Every time you got up out of that bed early and came to class, investing your time and your energy, which is precious, and even more precious, your hope in the future. It takes work sometimes. And as you have expanded your personal knowledge base, so the university does, too. And the city and the province and the country and the world itself ...Every moment, every day, you keep on learning something, that’s how the future happens."