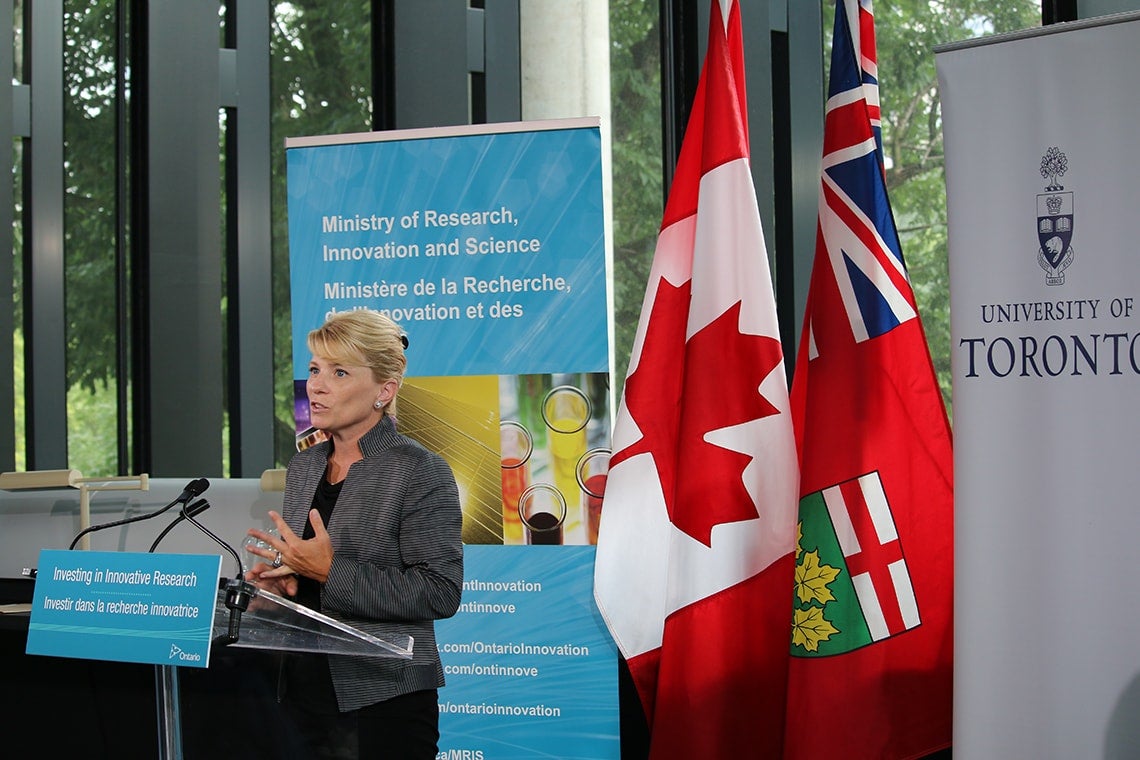 Professor Shana Kelley of the Leslie Dan Faculty of Pharmacy has developed an inexpensive diagnostic tool for early detection of hepatitis C. Her research is one of 62 projects at U of T that received support from the province (photo by Jennifer Robinson)

A simple, inexpensive diagnostic tool for early detection of hepatitis C – supported by funding from the Ontario government – could soon be helping people in some of the most remote corners of the Earth.

The research, supported with a $1.6-million grant, is one of 62 projects at the University of Toronto that has received support from the province, said Reza Moridi, Ontario's minister of research, innovation and science, who visited U of T on Friday and saw the Hep C test at work.

The disposable dipstick works much like a home pregnancy test, explained Professor Shana Kelley of the Leslie Dan Faculty of Pharmacy.

By placing a drop of blood on the dipstick, people can find out if they have the deadly blood-borne liver infection, which has affected over one hundred million people in the developing world, without the expense and delay of waiting for results from far away labs. If left untreated, Hep C can cause long-term health consequences – even death.

“We’re always looking at unmet needs where we think new technologies could really have an impact,” said Kelley, who is working with the Ontario startup company Xagenic to commercialize the made-at-U of T invention and bring it to market. 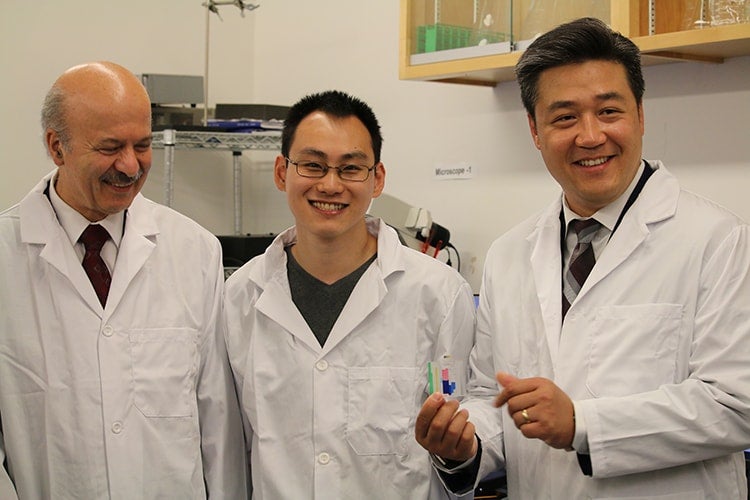 “Bringing new tools to the diagnosis of a disease that affects so many people in a devastating way – that’s why we run our labs and try to develop new technologies so that we can solve problems,” Kelley said. “These are not unsolvable problems. They just need new solutions.”

During the tour Friday, Moridi said that researchers at U of T are taking on global challenges.

“Through investments like these, our government is supporting research projects that will lead to new discoveries and pave the way for new technologies, companies and jobs,” he said.

Vivek Goel, U of T’s vice-president of research and innovation, added: “Funding from the province of Ontario is critical to jump-start globally important research at the University of Toronto, from combating devastating diseases to developing cleaner technologies and better manufacturing processes, that has significant potential benefits to improve the lives of Ontarians, Canadians and people around the world.”

Carmen Logie, an assistant professor at U of T’s Factor-Inwentash Faculty of Social Work, has two projects funded by the province. Her initiatives have the potential to reduce the growing number of young women in Canada with sexually transmitted infections (STIs), including HIV.

With reports of drug-resistant cases of gonorrhoea in the news and fewer chlamydia tests being administered to young women because of guideline changes in Ontario cervical cancer screening guidelines, educating women to prevent STI infections is increasingly important, she says.

Why rates are rising among young women is unknown, says Logie. It may be that too much focus has been placed on HIV prevention or the idea that STIs are “not as serious and curable.”

“One group of women that is overrepresented in the HIV epidemic – and less is known about STIs among this population – is African and Caribbean women,” said Logie. “Compared to other women, they have HIV infection rates that are seven times higher. Despite this, there is really very little evidence of what are effective STI and HIV prevention strategies with this population.” 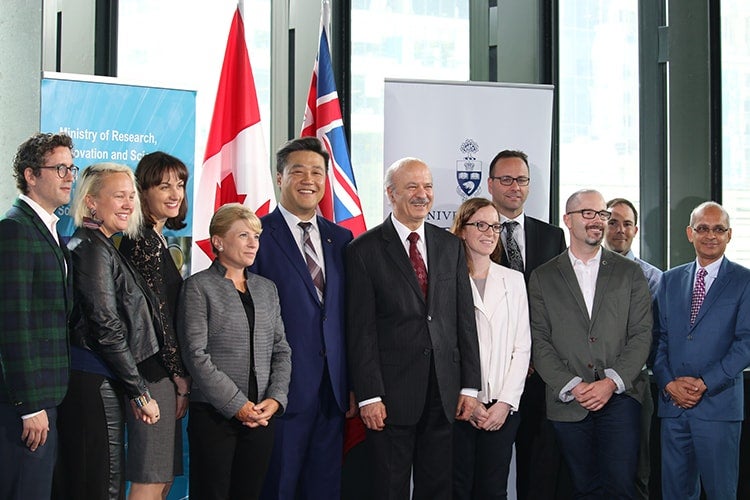 U of T researchers receiving funding from the province. Assistant Professor Carmen Logie (second front left) is working on initiatives that have the potential to reduce the growing number of young women in Canada with sexually transmitted infections (photo by Jennifer Robinson)

Using $140,000 in early research funding from Ontario, Logie brought an effective American safer sex intervention strategy called Healthy Love to the Greater Toronto Area. Working with community agencies like the Black Coalition for AIDS Prevention, the pilot was tailored to meet the needs of African and Caribbean women based on direct feedback.

Among the people Logie spoke with were recent arrivals to Canada who wanted to know what STIs were more common here, as well as women in lesbian, bisexual and queer relationships, the trans community and women who are incarcerated.

“We had promising findings where we increased STI knowledge, condom use efficacy and STI and HIV testing increased as well,” Logie said. “What we’re doing now is trying to scale it up and have a more rigorous design with a randomized control trial.”

She’s also in the process of setting up an online digital storytelling centre called the SSHINE Lab (Stigma & Sexual Health Interventions to Nurture Empowerment) with $200,000 in provincial funding where women can use videos to tell their own stories and encourage others around the world to learn more about HIV, STIs and testing, and how to practise safer sex.

Supporting this kind of research is important, Logie says, “because it’s good for everybody when we address the social determinants of health like gender norms [and] racial and gender disparities. Really, we’re trying to create a more equal, inclusive and accepting society.”