Scientist on soapbox: How one U of T grad is taking her research into the public realm 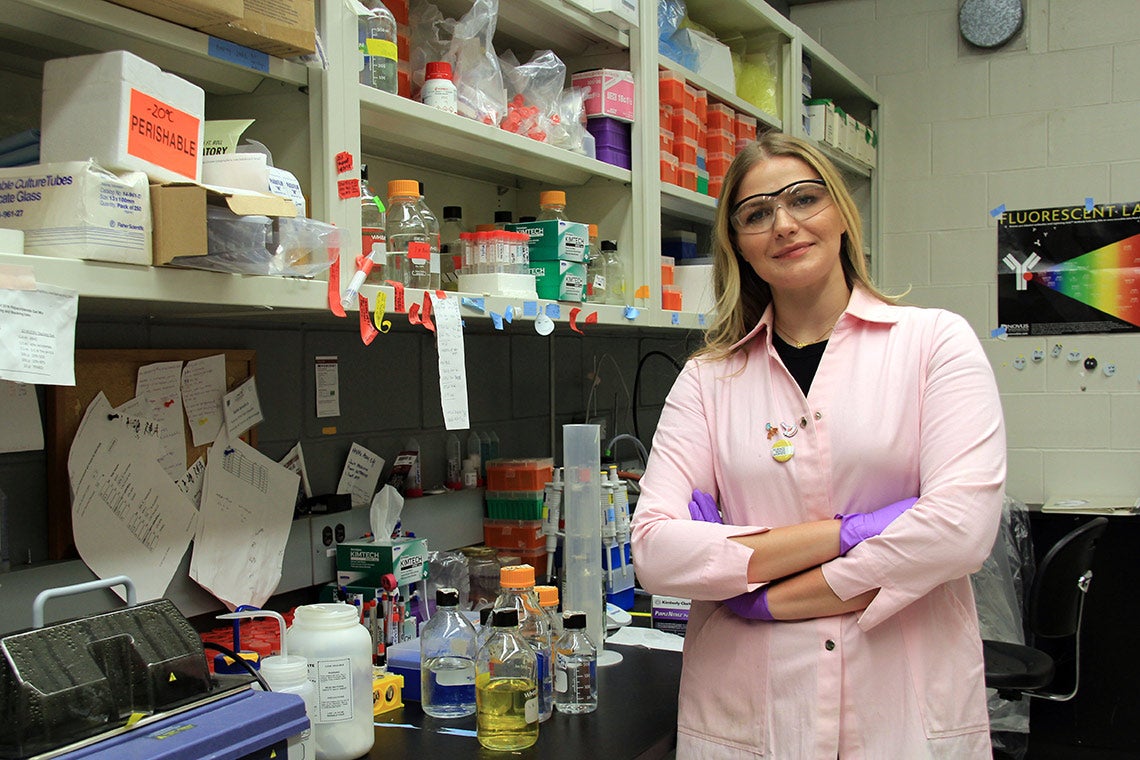 U of T Mississauga’s Sasha Weiditch, who graduated with a PhD in biochemistry, says she wanted to showcase the work of women in science and see it reflected accurately in popular culture (photo by Blake Eligh)

Sasha Weiditch may be the fourth in her family to graduate from the University of Toronto – her two sisters and mother are all alumnae – but she’s the first to focus on science and its communication to the wider world.

Known on Twitter and Instagram as @scigirlsash, Weiditch’s PhD in biochemistry from U of T Mississauga is merely the latest step in a journey that has taken her from the laboratory to the stage – and even a literal soapbox, where she once explained her research to passersby.

“Science isn’t meant to be kept on a notebook on the lab shelf,” Weiditch says. “It’s meant to be shared. As scientists, we have a duty to share what we’re learning to everyone, not just an academic audience.”

Weiditch began her education at U of T Mississauga as an undergraduate student. It was during her third year that she applied to work on an undergraduate thesis project with Voula Kanelis, an associate professor in the department of chemical and physical sciences.

“As I grew as a student here at UTM, it helped to define what type of science I was interested in and what I wanted to do,” she says. “I got to work with a supervisor and have the experience of what it was like to work in a graduate-style lab, what it would be like to be a researcher and whether I would enjoy this full-time.”

Weiditch’s experience encouraged her to continue her studies in the Kanelis Lab as a graduate student, using nuclear magnetic resonance and other high-tech tools to study bacteriophages (viruses that infect and kill bacteria) and antibiotic resistance. “The bacteriophage has the potential to kill bacteria that might be resistant to antibiotics, but it’s also used in the food industry to regulate bacterial populations in the production of milk and cheese,” she explains. “Our lab was a protein factory – we took it straight from the molecular biology side to protein purification. I got training in biochemistry and in molecular biology.”

Yet, while Weiditch was energized by her lab work, she also developed an aptitude for science communication, working as a teaching assistant and volunteering with Let’s Talk Science and a mentorship program for high school girls in Peel Region.

At the same time, she was building a social media presence that focused on women working in science, technology, engineering and math (STEM) fields. That included launching #PhDnomenalFemale, an interview series featuring women talking about their experiences studying and working in science.

“I wanted to share science and showcase the women in science that I knew, which didn’t equate to what I had seen portrayed in popular culture,” she says.

Weiditch also delivered a TEDxUofT talk on how social media made her a better scientist, and found herself describing her research in Toronto’s Yonge-Dundas Square for the first-ever Soapbox Science event in Canada. The participating scientists were asked to prepare an accessible 15-minute talk about their research that they could cycle through several times in between questions from the audience, according to an article in University Affairs. They were allowed to use props and even received public speaking training from a local comedian.

Weiditch credits her close family and Kanelis, her thesis supervisor, for supporting her along the way. “Dr. Kanelis is the reason I wanted to pursue graduate school – she was a woman in science, and that resonated with me,” she says.

“I wanted to learn more about the way she spoke about science, and be in that type of environment.”

During her time at U of T Mississauga, Weiditch travelled to Barcelona, Paris, Dublin and Colorado to present her research. In the next few months, she hopes to add more pins to her travel map and foster more science and research connections.

“Science offers the chance to innovate, create, discover,” she says. “Science opens a world of possibility.”