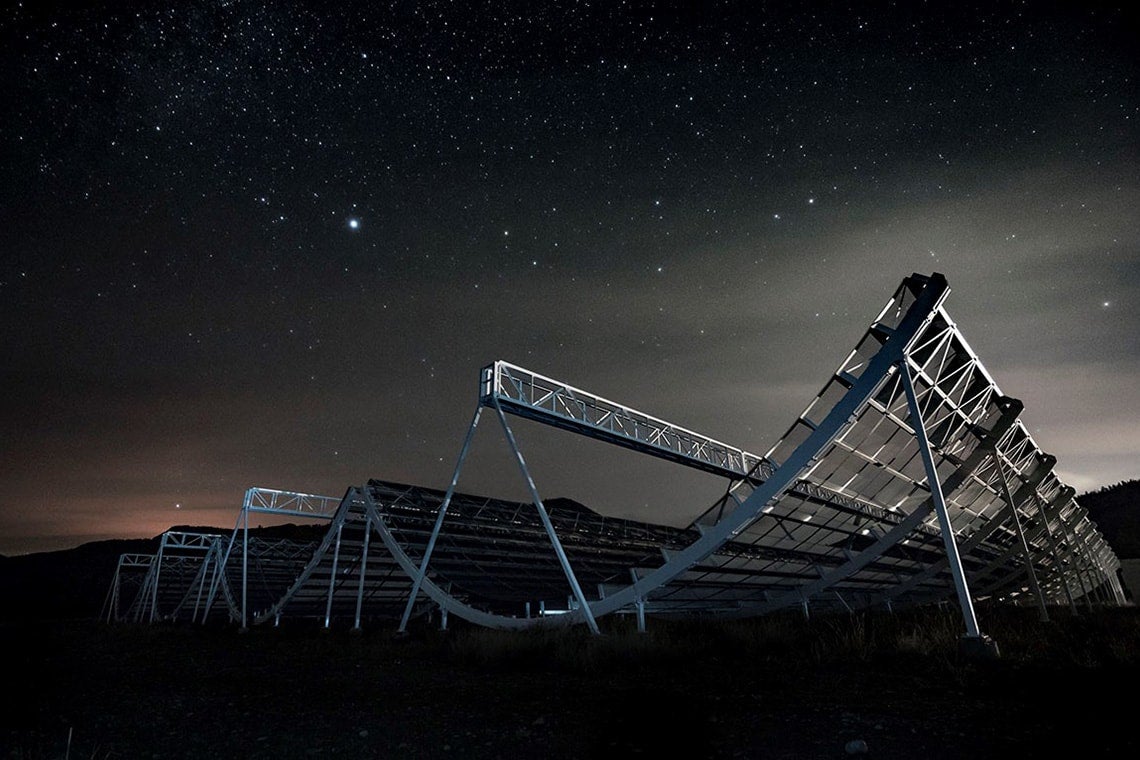 Seven quadrillion computer operations occur every second on CHIME. This rate is equivalent to every person on Earth performing one million multiplication problems every second.(photo by Andre Renard, Dunlap Institute for Astronomy & Astrophysics)

CHIME is product of 50 Canadian scientists, including from University of Toronto

A new type of telescope is now detecting cosmic radio waves, thanks to a Canadian effort, including the University of Toronto, to build one of the largest astronomical research instruments in the world.

Kirsty Duncan, Canada's minister of science, installed Thursday the final piece of this radio telescope that will bring to light some mysteries from the universe.

The Canadian Hydrogen Intensity Mapping Experiment, known as the CHIME telescope, is the product of  50 Canadian scientists from the University of Toronto, the University of British Columbia, McGill University, and the National Research Council of Canada (NRC). The telescope is perched in the mountains of British Columbia’s Okanagan Valley, at the NRC’s Dominion Radio Astrophysical Observatory near Penticton.

“CHIME is a stellar example of Canadian science," Duncan said. "The experiment is bringing astronomers from around the world to Canada. Here, they tackle forefront questions in astrophysics and provide a fertile training ground for the next generation of Canadian scientific ingenuity.”

The CHIME telescope is an extraordinarily powerful new instrument that will simultaneously extend three of today’s astronomy frontiers. It will measure the expansion history of the universe, discover new Fast Radio Bursts, and monitor hundreds of pulsars every day to aid in the detection of gravitational waves.

Unlike traditional telescopes, CHIME has no moving parts, yet it maps the full sky overhead every day. Its design exploits affordable consumer technology to image the sky rapidly, with high sensitivity. CHIME will survey the largest volume of the universe measured to date and simultaneously monitor an enormous swath of sky for new short-lived radio sources.

“CHIME ‘sees’ in a fundamentally different way from other telescopes," said Keith Vanderlinde of the Dunlap Institute for Astronomy & Astrophysics at the University of Toronto. "A massive supercomputer is used to process incoming radio light and digitally piece together an image of the radio sky.

“All that computing power also lets us do things that were previously impossible: we can look in many directions at once, run several experiments in parallel, and leverage the power of this new instrument in unprecedented ways.”

Read about CHIME in the Globe and Mail

Most of the signals collected by CHIME come from our Milky Way galaxy, but a tiny fraction started on their way when the universe was between six and 11 billion years old, and convey its history to us. The radio signal from the universe is very weak and extreme sensitivity is needed to detect it. The amount of  energy collected by CHIME in one year is equivalent to the amount of energy gained by a paper clip falling off a desk to the floor.

The data rate passing through CHIME is comparable to all the data in the world’s mobile networks. There is so much data that it cannot all be saved to disk. It must first be processed and compressed by a factor of 100,000.

CHIME is a $16-million investment by the Canada Foundation for Innovation and the governments of British Columbia, Ontario and Quebec, with additional funding from the Natural Sciences and Engineering Research Council and the Canadian Institute for Advanced Research.