‘Science is a contact sport’: What one U of T researcher learned in the lab of Nobel laureate William Kaelin 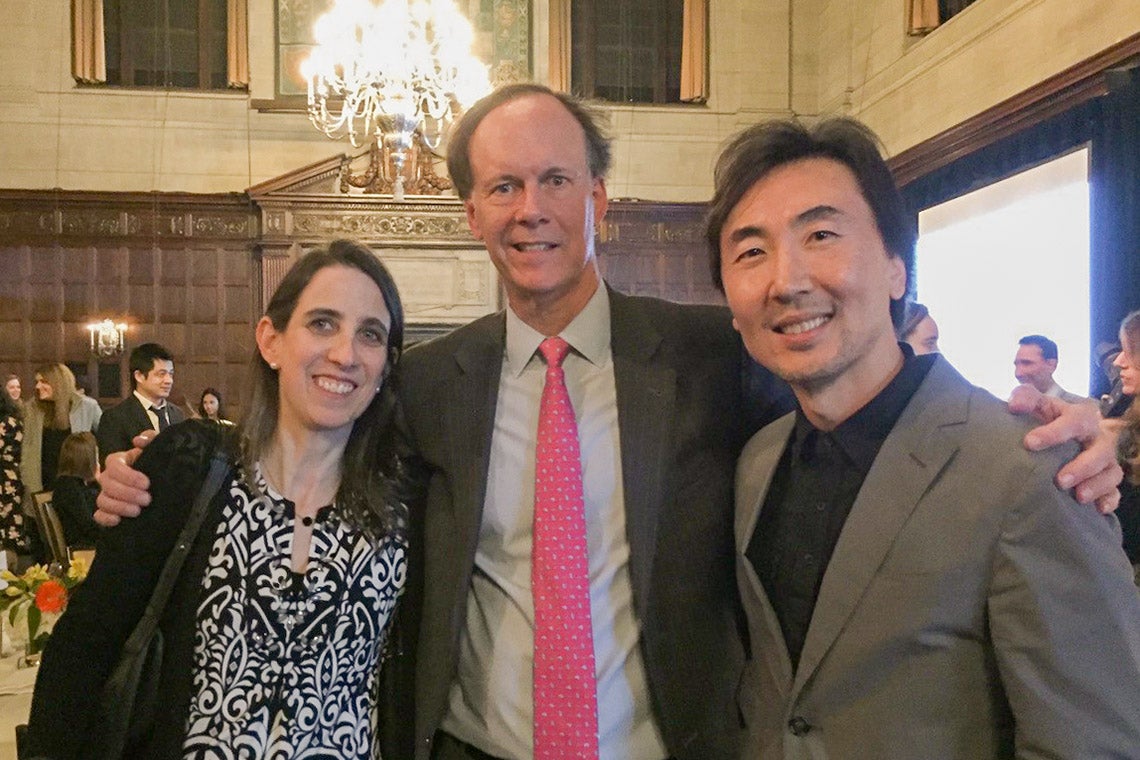 When University of Toronto Professor Michael Ohh was scouting postdoctoral positions at Harvard Medical School in the mid-1990s, a group of Canadians that often gathered to talk science told him to check out the molecular oncology floor at the Dana-Farber Cancer Institute, run by legendary virologist David Livingston.

It turned out to be good advice.

Ohh met with three young investigators Livingston had trained and hired, including the clinician-scientist William Kaelin Jr. “The floor was full of bright and driven people, and the electricity in the air was palpable,” recalls Ohh, now a professor of laboratory medicine and pathobiology and of biochemistry at U of T.

Ohh spent the next five years in Kaelin’s lab and co-authored several papers on how cells respond to changes in oxygen levels – research that contributed to Kaelin being awarded the 2019 Nobel Prize in Physiology or Medicine.

The work also set the stage for Ohh’s career as an independent scientist in Toronto, and it continues to bear fruit and hold promise for treatments of cancer and other diseases.

“One of the most significant things I learned in Bill’s lab was a rigorous approach to science,” says Ohh. “He really wanted you to nail the mechanism with a series of elegant experiments and he understood that process is highly competitive with other labs. He often said, ‘Science is a contact sport.’”

Ohh calls his time in Kaelin’s lab a “tour of duty” – unbearably stressful at times, but balanced by the excitement of doing fascinating science with talented people.

Kaelin’s lab was focused on three tumour suppressor genes. Two were well known, but the third was a newly discovered gene called VHL that had been shown to cause von Hippel-Lindau syndrome, a rare hereditary disorder in which patients develop multiple benign and cancerous tumours.

Only a handful of labs in the world studied VHL at the time and virtually nothing was known about its function. “We tried a guilt-by-association approach, looking for proteins with which VHL interacted in the hope that these might shed clues to VHL function,” says Ohh.

By the late 1990s, they had found several and determined that those proteins are part of a larger complex that likely targets other proteins for destruction.

They showed that without a functional VHL protein, these complexes are unable to degrade another protein called hypoxia-inducible factor (HIF), which in turn spurs tumour cell survival and growth even in low-oxygen microenvironments.

The mechanism at play in von Hippel-Lindau syndrome, in other words, also impacts how all cells sense and adapt to oxygen deprivation. “The worlds of hypoxia and VHL collided in that discovery,” says Ohh.

Researchers have since developed ways to control how cells sense and adapt to changes in oxygen, and are applying those findings for various conditions. A drug based on this approach is in clinical trial for various cancer types, and the findings also look promising in pre-clinical research for cardiovascular disease and anemia.

Ohh’s lab in Toronto has just figured out why certain people with mutations in another HIF gene get cancer and/or polycythemia (an excess of red blood cells). Recent clinical reports have detailed the plight of people with this mutation, and clinicians are now asking Ohh’s lab if they can help predict what disease their patients will eventually develop, so they can better monitor their patients for these conditions.

“Early detection is critical for outcomes in cancer treatment, so this is useful, highly personalized medicine,” says Ohh. “And it’s an extension of the work we did 20 years ago, which is gratifying.”

Ohh and his lab are also looking at evolutionary aspects of this molecular pathway. They are studying evolutionary diversions of the pathway among different animals over millions of years to see which genetic sequences and motifs are conserved.

Insights into these diversions could offer ways to understand the precise mechanisms and critical regions of HIF and VHL by which cells better respond to oxygen fluctuations.

Great science isn’t the only product of the Kaelin lab. Ohh met his wife Meredith Irwin there when she was a research trainee, and they have been together for two decades. Irwin is a professor of pediatrics, medical biophysics and laboratory medicine and pathobiology at U of T, as well as a clinician-scientist at The Hospital for Sick Children.

Irwin was born and raised in New York, studied at the Massachusetts Institute of Technology and Harvard, and trained at Boston Children’s Hospital and Dana-Farber for more than a decade.

The couple travelled to Boston for Kaelin’s 60th birthday two years ago. “They asked us to give talks, and afterward Bill made a comment about me stealing an American to Canada,” says Ohh. “We really are very happy here in Toronto.”