'Say yes to a text': Sarah Dowling on new directions in reading, writing and studying poetry 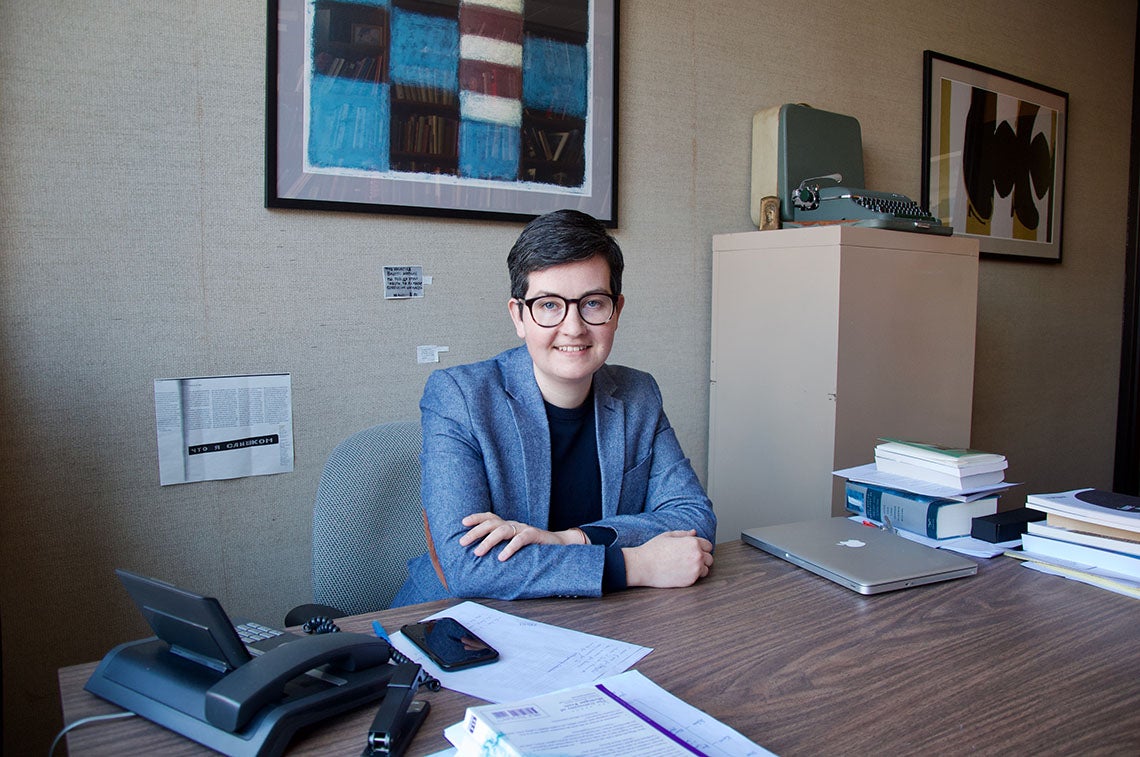 The work of literary criticism is often just that – critical. But Assistant Professor Sarah Dowling thinks we’re missing a crucial step before we delve into unpacking and critically analyzing a piece of literature, a step that could “lead to a more thorough and vivid understanding of a text.”

Dowling only recently joined U of T’s Centre for Comparative Literature in the Faculty of Arts & Science and Victoria College. An award-winning poet and literary critic, she is bringing important new conversations to light about authorship, appropriation and the socio-political dimensions of language.

An openness to meaning and interpretation, despite linguistic differences, is one way of saying yes to a text.

The book looks at works like acclaimed Canadian poet M. NourbeSe Philip’s 2008 work Zong!, which is constructed out of language from an 18th-century court document about the murder of 150 enslaved people. Written primarily in English, the work also contains text in western European and West African languages.

Multilingual poetry “questions the sense that there was ever a time when we had closed-off communities that were completely united by a single language and everyone was the same,” says Dowling.

“But it also rejects the kind of hand-holding, smiling, too-easy portraits of diversity and multiculturalism in which people are different, but there are no differences of power.”

Still, one might wonder what to do when coming across foreign words from an unfamiliar language inside a poem written mostly in English.

“There are things you can make meaning out of even if you don’t understand the words,” Dowling says.

“You have to think about things like the shape of the stanza, or its placement on the page. Multilingual poetry challenges you to deal with difference even when you can’t assimilate it. I think that can be quite powerful.”

In the last two or three decades, poetry has taken up some of the premises of the conceptual art of the 1960s – namely, that the idea behind a work of art is more important than its aesthetic or material properties, and that works aren’t necessarily made by individual authors expressing a singular artistic vision.

Conceptual poets, including Dowling herself, are reusing, repurposing and remixing existing texts in order to call attention to the ways in which we can say yes to a text that comes from another source and then reframe it to say something new or to mount a critique of the original work.

The abundance of written content in the digital era “has created some really interesting possibilities for poets and artists,” says Dowling.

But Dowling says simply taking existing text and remixing it into a new form is a bit too “blunt.” Instead, she champions work that “has a lot to say about the actual process of appropriating,” such as that of Nisga’a writer Jordan Abel. His 2015 book of poetry, Un/inhabited, searches through digitized text from 91 western novels – a total of 10,000 pages – to uncover the broader context of words and phrases associated with the colonial history of westward expansion in the United States and Canada.

Dowling also sees conceptual poetry as a very useful teaching tool, one which can diffuse some students’ discomfort with poetry and the creative process, helping them to say yes to not only the texts they read, but the ones they write themselves.

Conceptual poetry can be “a really exciting way to think about how one can position oneself as an artist,” says Dowling.

“Some of my students really identify as artists and love the opportunity to express themselves, but for other people who don’t think of themselves in that way, it can be really terrifying to be asked to generate something original and artistic,” says Dowling.

“Conceptual methods” – remixing and repurposing existing texts – “can level the playing field and let people do something that’s creative even if they don’t think of themselves as an artist.”

In addition to encouraging her students to be creative in their own literary works, Dowling also pushes them to be creative when studying others’ works.

“I think there’s a certain amount of exhaustion with critique,” she says, “because there are so many things that are in need of criticism, and it’s very depleting to always have to perform this negative gesture.”

Instead, Dowling advocates for a kind of affirmation of the texts we examine, simultaneously as we ask what more they could do for us or our world.

When asked if she thinks her approach has the potential to make her classes more fun for students, Dowling laughs and says: “I would let them be the judge of that.”