Running on empty: U of T's Nick Eyles explores California’s historic drought for the CBC 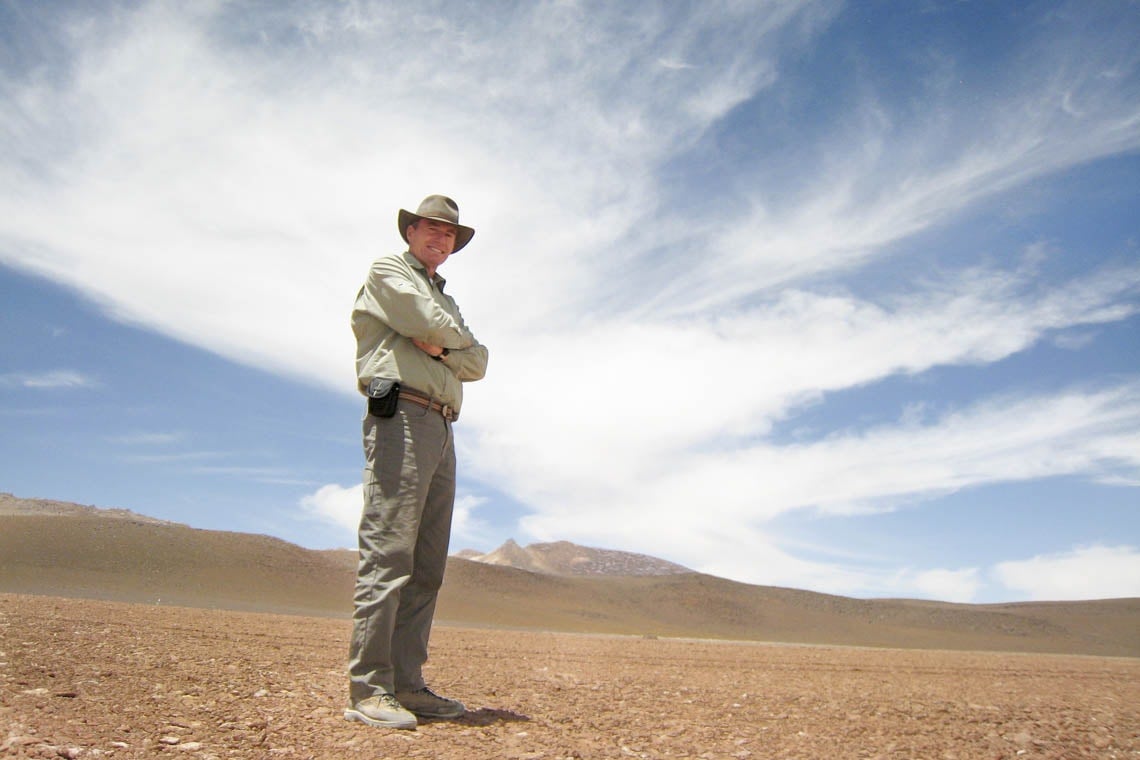 Nick Eyles in the Atacama desert

Nick Eyles has a passion for taking audiences on geological treks around the globe. As host of Geologic Journey for CBC’s The Nature of Things, he explored earth’s natural treasures while helping viewers unpack how our planet works.

Now, the University of Toronto Scarborough environmental science professor is turning his attention to California where an historic drought is ravaging the state, affecting not only farmers and city dwellers, but the natural environment as well. His new documentary Running on Empty, airs at 8 p.m. Oct. 20 on CBC Television.

Eyles, who is a recipient of the McNeil Medal from the Royal Society of Canada for communicating science to the public, spoke to writer Don Campbell about the drought that is unfolding in the Golden State.

Is it fair to say that the drought taking place in California is a natural disaster of an epic scale?

It certainly is, and I think it may well be a crucial turning point in the history of California. It has the potential to be much more damaging than earthquakes because it affects such a large area. It’s a pretty desperate situation. It’s the hottest and driest drought the state has experienced in 100 years, and a big worry is that it’s just the beginning of something longer. If you look at the record of recent climate preserved in tree rings and lake floor sediment, you can get a picture of paleo climates dating back thousands of years with mega droughts that lasted hundreds of years. What’s troubling is that this one is different because the temperature is hotter, so you’re getting more evaporation and more deadly bushfires. It’s beginning to look more and more like the beginnings of another megadrought.

It’s a deadly combination. There’s natural climate variability, which is basically being driven by sea surface temperature and complex patterns of ocean circulation not yet fully appreciated. Times of cool ocean waters and high pressure atmospheric systems appear to result in a lack of moisture inland. The fundamental problem has been lack of snow across the Sierra Nevada because this feeds groundwater below the Central Valley and rivers. Then, you have human-made climate warming, the full magnitude of which has yet to play out. And then there’s dramatic overuse of existing water by industry, agriculture and city dwellers. Quite simply, they are pumping water at rates that aren’t sustainable, especially with population growth.

The surface water allocation policies that are supposed to regulate how much river water any particular city can have were written many decades ago when there was more snow in the mountains, so they’re no longer valid under drought conditions. Then you have an old creaky administrative system, different water rights holders and a legal system that is incredibly Byzantine. The system can’t react quickly enough. There’s also massive overpumping of groundwater that is lowering the water table and actually sinking the Central Valley as water is pumped from underlying sediment, but they’re also lacking hydrogeological data and suitable management plans. This is a classic example of the tragedy of the commons. They are accelerating their studies of groundwater, but it takes decades to collect data and get accurate models, and the problem is right now.

What about conservation efforts?

Conservation has worked a bit, but it has lured people into a false sense of security. People began to relax a bit once they started conserving water especially with the wet winter last year, which unfortunately didn’t add much snow up in the mountains.

There is coastal desalinization, where seawater is converted at great expense, but building plants has been controversial, and new ones are far in the future. There have been significant efforts in treating wastewater, and this will grow in importance. Cities that used to dump treated sewage into rivers now can’t do that because the rivers are dry. They’ve developed highly innovative techniques to clean that water, which now goes to farms for irrigation.

How is the drought affecting the natural environment?

The natural environment is the big loser in all of this. Most of the water comes from snow in the Sierra Nevada Mountains, which then flows out west towards the Pacific Ocean but most of that is being diverted, taken south by canals to cities and the farms in the Central Valley and then piped up to Los Angeles. Some former wetlands now look like stubble fields. Some water has been diverted back to the natural environment in recent years, but in most people’s minds this is wasted because it flows back out to the Pacific. They fail to appreciate the aquatic ecosystems that are dependent on that water.

The saddest part for me was driving up the Sierra Nevada and seeing black bears all over the place. Normally they’re up in the mountains, feeding off berries. But there aren’t any, so they’re in the valley starving and scavenging for acorns. The Salton Sea, which used to be a large inland lake, has now dried out and is literally a dust bowl. As we were pulling out of the area one evening, a wall of dust was being blown up valley. It’s man-made environmental degradation on a massive scale. It just drove home the point that when it comes to water, the natural environment is a distant fourth behind cities, agriculture and industry.

What is the mood among farmers in California?

It’s pretty pessimistic. Many farmers have been there for multiple generations. Agriculture also employs a lot of people, and they’re also under a lot of stress financially. They feel unappreciated by city dwellers. They feel that city dwellers see them as greedy. The move away from vegetables to almonds hasn’t helped. Almond growing has become a huge industry because it’s a big cash crop, but you need four litres of water to grow one almond. Some groves are now being uprooted. It’s likely some farming communities will disappear completely.

Do you think the situation can improve?

It takes several years to get a desalinization plant up and running. As impressive as wastewater-treatment plants are, they also take years to plan and build. I think there will be a lot of years of real pain, and it will be the natural environment that suffers the most. I saw bottled drinking water imported from Hawaii and Alaska, even as far as Fiji. Eventually, they will look for water supplies elsewhere, maybe from their northern neighbour. Even without the current drought, they are short of water. What they fundamentally need is a systematic look at how they manage their water resources. This includes both surface and ground water and the creation of a statewide game plan as to how California will get through the next few decades.