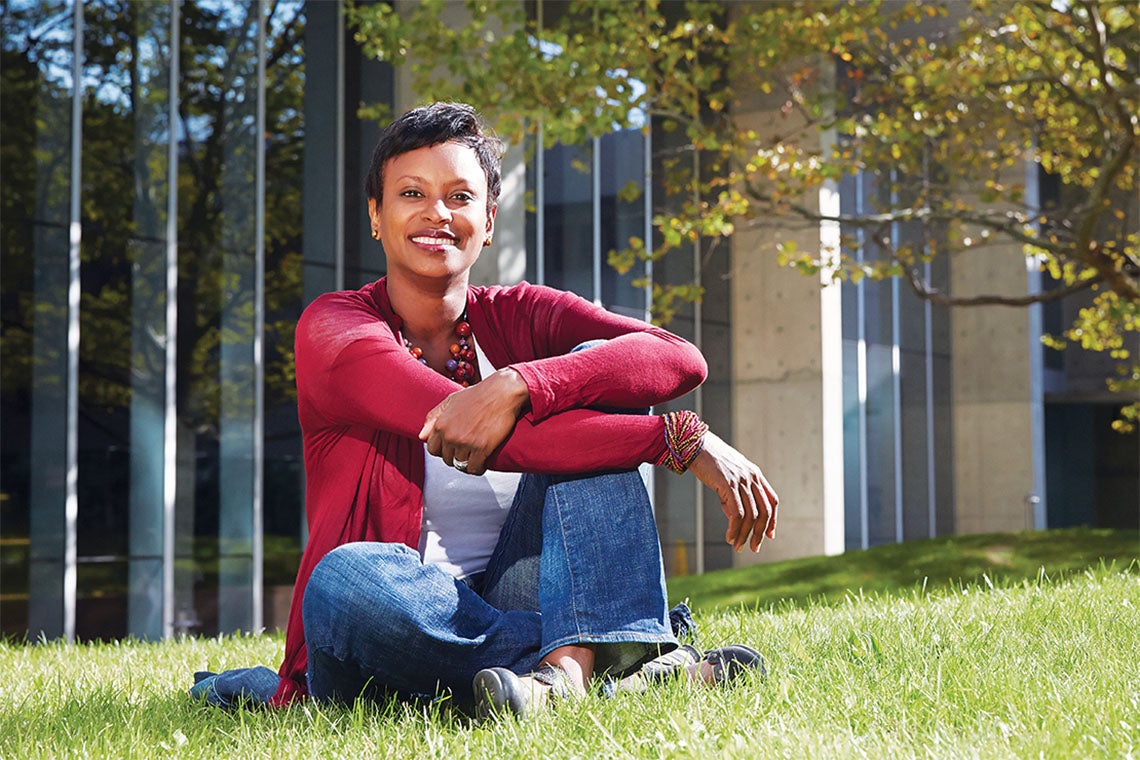 Associate Professor Rhonda McEwen, director of U of T Mississauga’s Institute of Communication, Culture, Information and Technology, has spearheaded or become involved in numerous equity, diversity and inclusion initiatives (photo by Paul Orenstein)

When University of Toronto Mississauga associate professor Rhonda McEwen was growing up in Trinidad and Tobago, most of the people in her life – her neighbours, university teachers, senior executives, politicians and even the prime minister – were either Black or people of colour.

“I didn’t have this idea, growing up, that things could be limited for me because of the colour my skin or because of my gender,” she says, adding she was a STEM student at an all-girls school.

It wasn’t until McEwen moved to England for her first master’s degree that she experienced what it was like being in a minority group.

Since moving to Canada about 18 years ago, McEwen has spearheaded or become involved in numerous equity, diversity and inclusion initiatives, including U of T Mississauga’s Black Table Talks, a networking opportunity for Black students, faculty and staff, and Visions of Science, which engages youth from low-income or marginalized communities in STEM subjects. As a member of the U of T Mississauga research council, she helped develop a policy to support female researchers on parental leave. McEwen was also instrumental in bringing Black colleagues at U of T Mississauga together.

In recognition of the work she has already undertaken and in an effort to build on that progress, McEwen was recently appointed the vice-president and principal’s special adviser on anti-racism and equity at U of T Mississauga.

The creation of the position comes at a time when the world faces a moment of historical reckoning. Alexandra Gillespie, vice-president and principal at U of T Mississauga, says that, while the injustices are not new, we are confronting them in different ways.

“It is important that, as a university, we recognize that and create new mechanisms by which we can listen to racialized members of our communities and hear from them what the university needs to do to address systemic racism locally and globally,” she says.

While McEwen’s role is to directly advise Gillespie and members of her executive team, Gillespie stresses that it is not up to McEwen and other racialized members of the community to do all the work.

“Her position is to speak and for us to listen,” Gillespie says. “It’s our job to do the work, to put new structures in place, to provide education where it’s missing, to open up new opportunities, to put funding where it’s not, to hire people where they weren’t and to change the way we do business.”

For McEwen, it’s about actively listening to the community and bringing their ideas and concerns forward. It’s also about using her voice to move the needle on important issues. She is already setting up a listening tour where she’ll meet with every U of T Mississauga unit head to gather any information she can relay up the line.

There is also a plan for an Equity, Diversity and Inclusion Office retreat that will bring a diverse mix of people at campus together to determine simple but meaningful and effective initiatives that can be immediately accomplished.

With advice from McEwen, Gillespie’s team is putting together a series of actions that focus on Black, Indigenous and racialized faculty and staff, with other actions focused on the needs of staff and the community to come. Gillespie says they are not only examining issues around anti-racism, but targeting matters related to equity and seeking opportunities where women, people with disabilities and the LGBTQ+ community can thrive, grow and rise up the ranks.

“There’s a lot that needs to be done and there’s a lot going on,” Gillespie says, adding that she’s currently focusing on the university’s existing strengths and relying on structures already in place because of the pandemic.

“I am enormously grateful to Rhonda for her willingness to provide this advice.”

As for why she has taken on this important, yet monumental task when she’s also a Canada Research Chair in Tactile Interfaces, Communication and Cognition and director of U of T Mississauga’s Institute of Communication, Culture, Information and Technology, McEwen explains: “I, myself, had to come to understand what (the Black) experience was like; I am open to the time it takes for others to get there too. I have the energy, the capacity, the patience and the hope that we will get there.

“I have a very positive outlook on this role."