‘The responsibility of truth-telling’: U of T student blends disciplines to document youth criminal court proceedings 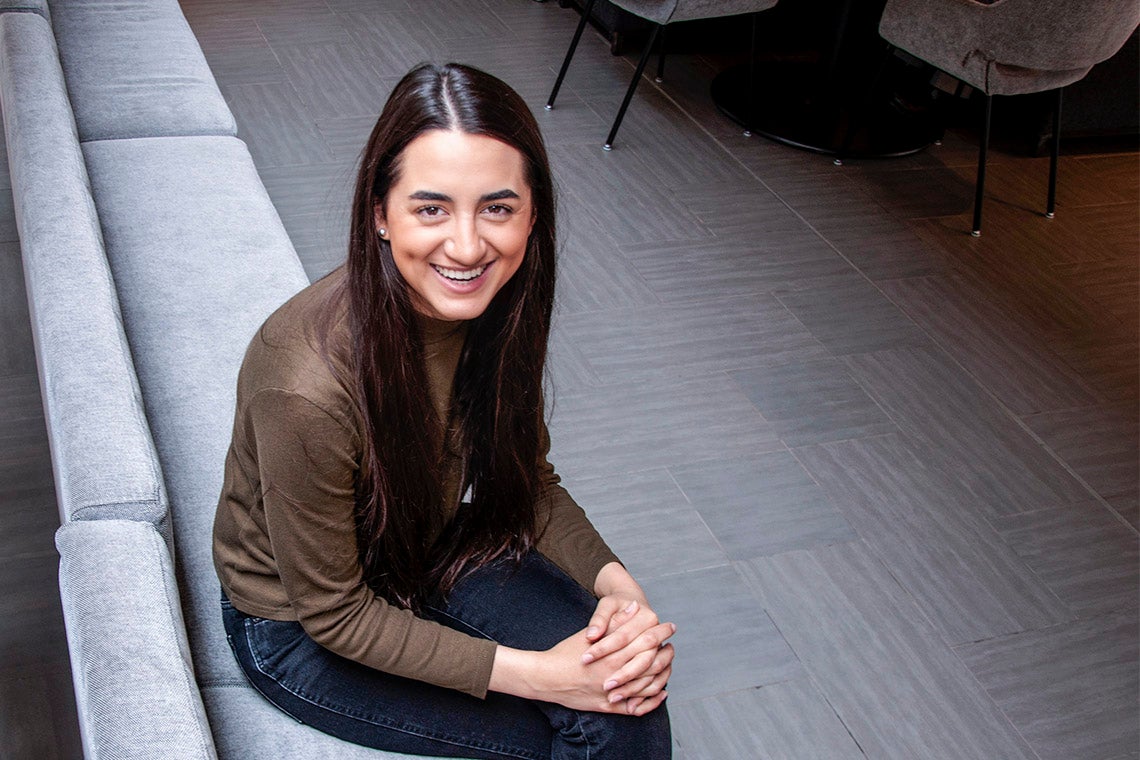 “Documentaries have the responsibility of truth-telling and I want to be part of that," says Innis College student Tara Suri (photo by Diana Tyszko)

Tara Suri has integrated an unusual collection of disciplines into her studies. From cinema to law, linguistics, anthropology and even urban geography, the University of Toronto student is happily mixing and matching fields of study to carve out a niche for her work.

But when the Innis College student first started her degree, she struggled with how to combine her diverse interests. She was interested in both cinema and anthropology – and hoping to go to law school.

Then, one of her teachers, Benjamin Wright of the Cinema Studies Institute in the Faculty of Arts & Science, encouraged her to explore legal documentary – a genre of non-fiction film that profiles crime, law enforcement, the judicial system and related topics.

When Suri watched the seminal Errol Morris film The Thin Blue Line (1988), a documentary about a man wrongly convicted of murder by a corrupt jury, she was hooked.

“I thought: ‘This is so incredible; I never knew this existed,’” she says. “I grew up in the arts. I was a music kid. And I was struggling with how to bring my interests in art and law together.”

At the same time, Suri was looking for volunteer and intern positions in the legal field, trying to figure out whether she’d enjoy law school. She eventually spent two summers at a provincial legal aid clinic that specializes in youth crime.

And that’s how some of her most important research emerged.

In youth criminal justice courtrooms, Suri noticed that many of the young offenders on trial were unable to fully comprehend the legal proceedings that directly affect their fate. Their representatives were often too overburdened to explain the proceedings to their clients in a meaningful, accessible way.

“I saw things happening that shouldn’t have been happening,” she says. “It was such an eye-opening experience. I cried a lot that first week. It was devastating.”

Suri documented these youth court proceedings in a paper, “‘Do you understand these charges?’: How procedural communication in youth criminal justice court violates the rights of young offenders in Canada,” which was recently published in Semiotica: Journal of the International Association for Semiotic Studies.

She’s been invited to present her work in U of T classes and will be bringing it to conferences like the International Language and Law Association Conference at UCLA School of Law next month and the Canadian Criminal Justice Association Congress in Quebec City in November.

The research came out of an extended collaboration with Professor Marcel Danesi of the department of anthropology, with whom she took an introduction to linguistic anthropology course in her second year.

“The course’s final assignment was to study how a certain population speaks. I decided to focus on youth crime from an ethnographic perspective – looking at what legal jargon is, how it’s employed in a youth criminal court and how it exemplifies certain theories we learned about in the class, such as oral language competency, gambits, group coded vocabularies and so on.”

“Professor Danesi was incredibly supportive,” says Suri. “Within a week of finishing the course, I was back in his office and we decided to develop this into an ethnographic independent study.”

Even though she was excited about her project, Suri had to be patient through a long and drawn-out research ethics approval process. “The research ethics board told me that I was working with a very vulnerable population,” she says. Her initial research ethics proposal was rejected.

Enter Emily Hertzman, a sociocultural anthropologist and postdoctoral researcher in the Munk School of Global Affairs & Public Policy. Hertzman invited Suri to a workshop she was teaching at the Ethnography Lab on conducting ethnographic research, which helped Suri put together a successful research ethics application.

Looking back on her time at U of T, Suri says she feels “incredibly blessed” with the support, resources and collaborative relationships she has had.

“The faculty have been so supportive; I can’t thank them enough. The staff at the department of anthropology helped me find funding for conference travel costs. And research funding from Arts & Science supported me financially while I was simultaneously doing my unpaid internships at legal aid.

“I feel so lucky to have found the community that I have.”

She’s not only a key member of her community, but one of its emerging leaders. In addition to her academic work, Suri has been extensively involved with the Cinema Studies Student Union. She’s held a part-time, on-campus job at the Innis Library for three years and is a past and current president of U of T’s Duke of Edinburgh’s Award program. Finally, she’ll be returning to the Ethnography Lab as a research group leader, where she’ll conduct workshops on legal ethnography and ethnographic films.

What’s next for this multidisciplinary young scholar? For starters, she’s dipping back into her passionate interest in film theory and criticism.

“I’m now working on a follow-up paper about the representation of youth crime in legal documentaries,” says Suri.

“I’d like to do a master’s degree in either anthropology or cinema, and then law school, hopefully. I’d like to get into legal content advising for non-fiction film. I think there’s so much potential in the media and in film to inform the public, which then informs policy changes.

“Documentaries have the responsibility of truth-telling and I want to be part of that.”