Resist or resign? U of T political scientist on rumblings of defiance in Trump civil service 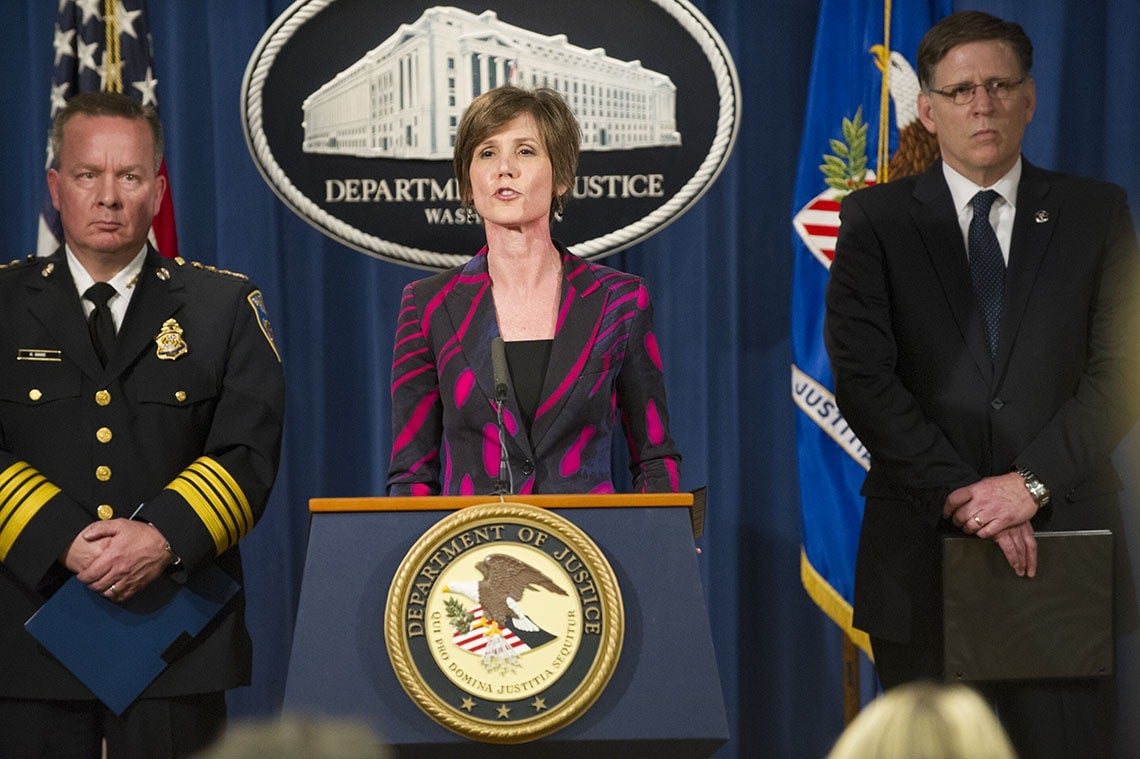 While a presidential election in the U.S. brings about a new administration and a new appointed cabinet, what happens to the millions of public servants employed by the federal government?

Usually, they remain from term to term. But under U.S. President Donald Trump that's not a certainty.

There appear to be rumblings of resistance from within the federal government. From starting “rogue” government agency Twitter accounts – some of which are allegedly leaking inside information – to reports of staff joining civil disobedience support groups, it appears that public servants are finding different ways to resist.

For his part, Trump has called for a hiring freeze of federal jobs with the exception of military, public safety and public health sectors.

On Monday, he fired acting Attorney General Sally Quillian Yates – a holdover from the Obama administration – hours after she refused to deploy Justice Department lawyers in defense of his executive order banning people from seven Muslim-majority countries and refugees from anywhere in the world from entering the United States.

U of T News spoke with U of T Scarborough political scientist Ryan Hurl about the kind of bureaucratic change we might see duringTrump's presidency.

How does the Obama to Trump transition differ from previous administrations?

Every transition has its own peculiar features, but certainly this is not the first transition to be described as somewhat chaotic – like the transitions under Jimmy Carter in '76 or Reagan in '80 where you had people coming from outside the Washington D.C. Bubble with both Carter and Reagan being governors.

But I think in this situation, it's a bit less about the appointment of specific individuals, however controversial that has been, and more about the flurry of policy change that Trump is pursuing in the short-term.

What are the options for civil servants who are trying to decide whether or not to work under the Trump administration?

There has always been this problem in the United States in comparison with most parliamentary systems. If you were to look at the transition under Margaret Thatcher in Britain, even though there were politically radical changes that were being introduced, there was not the same sense that the civil service was a major obstacle. There was more of a sense of the civil service as being politically neutral and independent.

Obviously with Trump there is a sense that it's such an unusual political scenario that this has been exacerbated a little bit. The situation in the United States has always been a little bit more politically tumultuous in terms of the relationship between elected officials and the government. It can be very difficult for the American government to discipline and constrain the bureaucracy simply because the entire system of separation of power is structured to make it very difficult to do anything.

When government officials chose to resist are there implications?

I think people should perhaps be a bit more troubled by it than they are. Think of it this way, what would you think about the FBI or the Bureau of Alcohol, Tobacco and Firearms resisting president Obama? The notion that it is OK for bureaucrats to resist a government – that’s how democracies end.

The military is a bureaucracy, and there's no bureaucracy that shouldn't ultimately be under civilian control. Any democracy should be concerned if there's a sense that the allegiance of bureaucrats to their agency is somehow more important than their allegiance to the democratic system.

Public servants' acts of resistance - can they damage the government's reputation?

There has always been this case where the American government has difficulty controlling information, and I think that is potentially very dangerous.

You can see it going back to the Vietnam War era, and we can see it with the leaks surrounding Edward Snowden and Chelsea Manning. It's hard to know how much of an impact these kinds of Twitter wars will have from anonymous bureaucrats that are doing this as a hobby on their own time. I'm not sure how significant it is, or if it's going to be some kind of catalyst.

What is a problem for the government is if bureaucrats adopt a more subterranean strategy – a work-to-rule strategy where it's possible to slow down the gears and mechanisms of government without doing anything illegal. I could see a situation where there can be a kind of critical mass of resistance. At that point, it's difficult to predict what would happen.

If it reached a point where there was a sense bureaucrats were genuinely resisting lawful policy changes by the Trump administration or lawful policy changes by Congress, I think you could see major changes of how the civic service is structured. Already, Trump has been in contact with Scott Walker, the governor of Wisconsin who has radically altered the relationship between public sector unions and the Wisconsin government, and they're considering changes at the federal level as well

Trump is willing to play hardball. If there's a sense bureaucrats are not going to be neutral public servants, he is willing to change the underlying social contract between the bureaucracy and the elected branches.