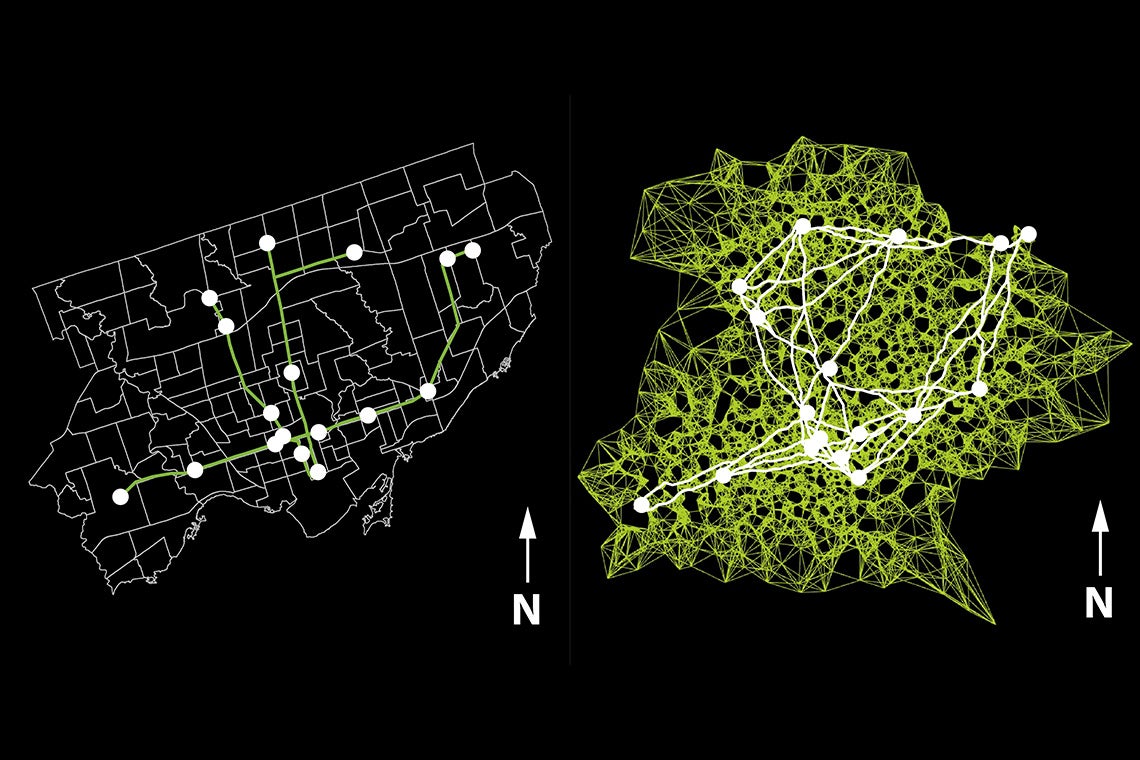 At left, a map of Toronto showing 17 of the TTC’s 75 subway stations. At right, a network connecting the same 17 transit nodes that was created by a computer model of Physarum polycephalum, otherwise known as a slime mould (images courtesy of Raphael Kay)

It doesn’t have a brain and survives on rotting vegetable matter – but it could offer valuable insights into city planning, according to a team of University of Toronto researchers.

Physarum polycephalum is a slime mould, a single-celled amoeboid organism that grows as a greenish-yellow system of veins. These veins form a tubular network that is optimized to transfer nutrients efficiently throughout the entire organism.

Slime moulds first “forage” broadly over an area, then refine their tubular network to optimize for transport of the nutrients. Now, researchers believe the slime mould’s efficient organic structure could provide a model for optimizing other networks – including those designed to move people and goods around a city.

“Humans aren’t the only ones dealing with the challenge of designing efficient, resilient networks,” says Raphael Kay, who joined U of T’s Faculty of Applied Science & Engineering as a master’s candidate after completing his undergraduate degree at the John H. Daniels Faculty of Architecture, Landscape, and Design.

“In architecture school, we were taught by human architects the lessons of past human architecture. But the slime mould has been shaped by hundreds of millions of years of evolution, so in that sense, they are far more experienced at solving certain architectural problems than we humans ever could be.”

Kay, who is supervised by Ben Hatton, an associate professor in the department of materials science and engineering, is not the first to think this way. Back in 2010, a team of researchers from Japan and the U.K. fed a slime mould with nutrients arranged to imitate the nodes of the Tokyo subway system. The resulting network was strikingly similar to the real thing, and sparked the emergence of what is now known as biologically inspired adaptive network design. Other researchers have since conducted similar studies in the context of their own regional rail or road transportation networks.

Kay, along with Anthony Mattacchione, a master of architecture student, built on this work by creating a computer model that simulates the way slime moulds construct their network. They validated the model by comparing its results to those of a real slime mould grown on an agar plate, which they fed with oatmeal.

The results of their work were published this week in Scientific Reports.

The networks created by the model were evaluated using three key metrics:

Looking at the ratios between these metrics, the team saw good correlation with the actual slime mould: the deviation between the model and the living organism was less than four per cent.

While other teams have created similar models, what sets this one apart is the way it was explicitly aimed at architects, city planners and other professionals who might be interested in incorporating lessons from nature into their design process. For example, the user could specify a maximum cost or minimum travel time and generate a selection of networks designed to meet those needs. (Kay says he and Mattacchione first conceptualized the model for a graduate architecture course taught by Assistant Professor Maria Yablonina at the John H. Daniels Faculty of Architecture, Landscape, and Design.)

To test the virtual slime mould model, the team programmed it to create two sample networks derived from real-world situations. One set of points was derived from the locations of various roller coasters and food stands at Canada’s Wonderland, a local amusement park. The other was based on the locations of 17 key subway stations in Toronto.

“In the Canada’s Wonderland example, our model generated a network that, for the same cost, would provide a travel time 10 per cent faster than the real-life network and 80 per cent more resilient in the event that one of the segments gets blocked,” says Kay.

“For the subway, the most striking finding was that for a network with the same travel time as the real thing, our network was 40 per cent less susceptible to disruption.”

The results may not be that surprising to those who have used these real-life networks, which weren’t necessarily designed with resilience to disruption as a top priority. Kay and Hatton say they are not advocating for these networks to be re-designed from scratch, but rather using them as examples of where their model could offer insights on the best places to add segments, as well as to inform future designs.

“Another advantage of our model is that it can generate the attractor nodes itself, without the need for designer input,” says Kay. “For example, you can upload the population density of a real neighbourhood or city, and then have it determine the network nodes that might best serve this population.”

The team is considering making the model available on an open-source basis to anyone who wants to use it.

Hatton says it has potential to bring together expertise and insights from disciplines that have traditionally been thought of as separate. “Raphael and Anthony developed a really useful tool, which I think is pretty accessible to anyone,” he says. “You could imagine it being used not just for transportation networks, but freight networks or energy networks. It turns out they are trying to optimize networks in the same kind of way as the slime mould.”