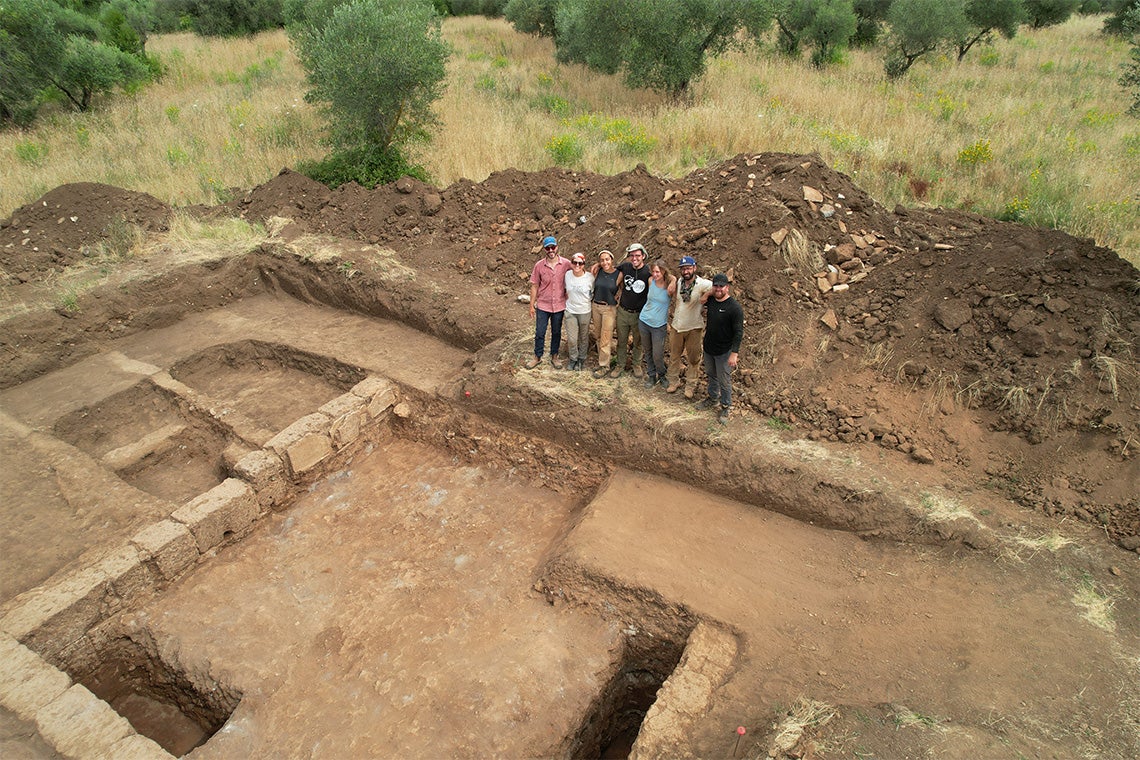 Seth Bernard and his team of graduate students stand in front of a trench in Falerii Novi, an ancient city located about 50 kilometres north of Rome (photo by Emlyn Dodd)

From small coins to tiny pieces of ceramic and even clumps of soil, Seth Bernard and a group of graduate students from the University of Toronto are unearthing a story about how a Roman city founded in 241 BCE lived and breathed through time.

“What I want is the day-to-day, what it was like –the connections linking people in the countryside to people in the city,” says Bernard, an associate professor in the Faculty of Arts & Science’s department of classics. “And it's just that day-to-day experience we can start to reconstruct in a way we've never done before.”

Bernard is part of an international team of scholars exploring “Falerii Novi,” an ancient city located about 50 kilometres north of Rome. 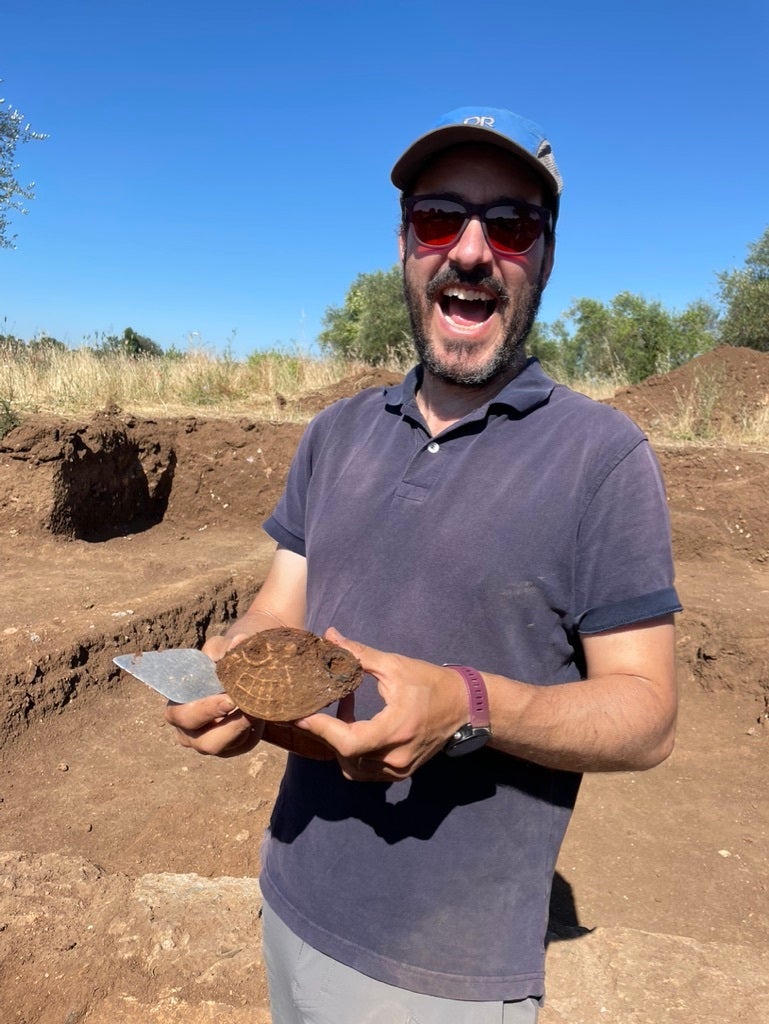 As part of a five-year project, Bernard collaborates with colleagues from Harvard University and the British School at Rome. He also worked with a team from Ghent University in Belgium during the four-week season this past summer. The project works by concession of the Soprintendenza di archeologia per la provincial di Viterbo e l’Etruria Meridionale (the Superintendence of Archaeology for the province of Viterbo and southern Etruria).

Aside from portions of the city’s original walls that still stand, the site is a scenic flat plain of agricultural fields and olive groves. But buried underneath is a fascinating history of a city founded over 2,000 years ago that, at its height, was home to about 15,000 people.

About 35 scholars from different fields were focused on three separate dig sites. One site, overseen by the British School at Rome, focused on one of the city’s main streets, which researchers believed included both homes and businesses.

U of T and Harvard students, meanwhile, worked at two separate sites. One is a market building and the other, led by Bernard, is a house believed to be a residence of one of the city’s elite families, which later changed functions to accommodate more work-like activities as the centuries passed.

Each morning, Bernard and his team of students laced up their boots, traveled to the site and began work.

“We had a shed built on site, so we'd open up the shed in the morning, take out our wheelbarrows, pickaxes, shovels and all of our other tools and start digging,” says Bernard.

It was at times grueling, but more often exhilarating.

“Archaeological field work is hard; pickaxing and shoveling red clay in the Italian summer is sweaty and backbreaking work, and analyzing and classifying material as it emerges from the ground is a heady, focused process,” says Matt Coleman, a PhD student in the department of art history as well as U of T’s Mediterranean Archaeology Collaborative Specialization (MACS) program.

“But the combination is a lot of fun, and a welcome change of pace from the otherwise desk-heavy grad student life. I gained a new appreciation for what it takes to keep ancient material culture from being lost forever.”

Together, the team wasn’t just hunting for artifacts, it was digging for evidence of human interaction.

“Anytime someone detected something in the area ... we tried to take it out separately so we can understand chronological and other information associated with that action,” says Bernard.

“[Artifacts] are important more for the information they give us than for their intrinsic value. It's always fun to find something cool, but I also like building up that narrative and understanding human activity in that place.”

The “Tupperware” of antiquity

One of the best examples of this is ceramics, which Bernard calls “the Tupperware of antiquity.”

“From these little pieces, you can reconstruct dates and understand importation routes. You can do scientific analysis on the pottery that tells you where it was made, the firing temperature of the kiln and how skilled the person working the kiln was,” he says. 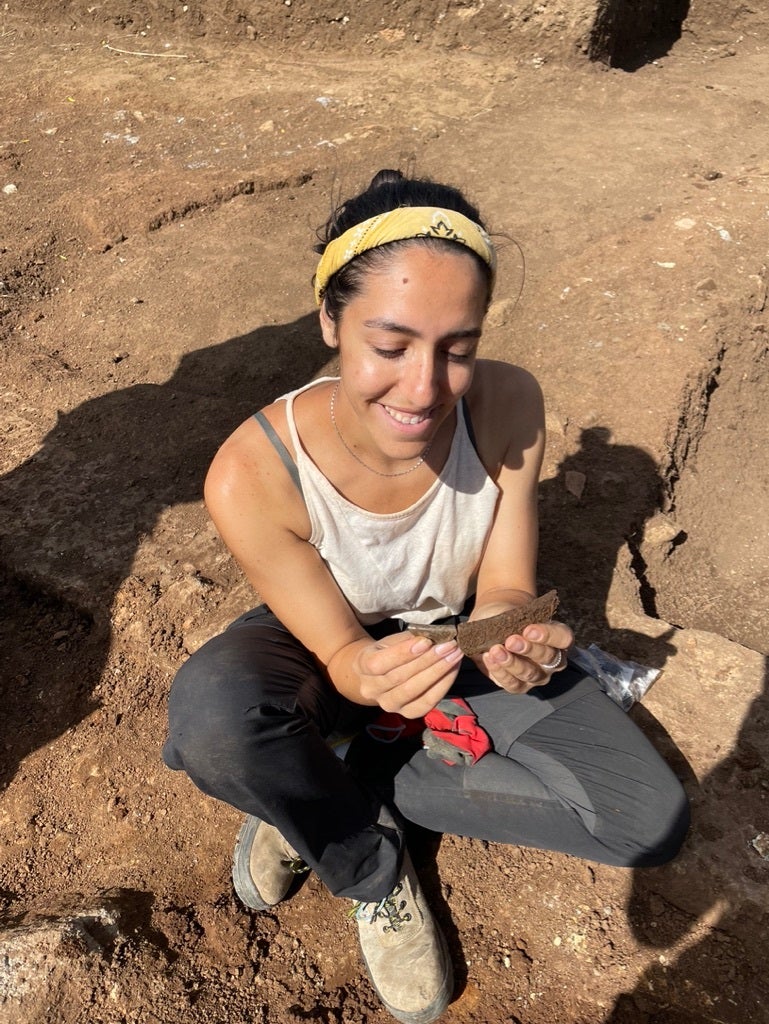 “And from those sorts of things, you can understand production routes, consumption patterns and the webs of economic networks attaching themselves to that place.”

Encapsulating so much information, it’s no wonder Claudia Paparella, a PhD student in classics and the MACS program, was giddy at finding such artifacts.

“For the first time in my life, I saw fully intact objects emerge from the ground and the feeling of being able to put together the pieces of ancient people's everyday life was indescribable,” she says.

Bernard and his team also collected environmental data. Extracted pollen and soil samples can reveal which vegetables were grown and if they were grown locally or brought in from other communities.

Finding something as simple as different coloured soils was met with great excitement.

“What strikes me as astounding is the level of detail that we can sometimes reach only by noticing two differently colored soils, side by side,” says Paparella. “A few centimetres of soil have the potential to tell us different stories from the ones we read in history books.”

“There’s nothing like holding an archaeological remain – even something as simple as a shard of pottery or a rusty nail – and knowing that someone thousands of years ago was standing exactly where you’re standing now holding the same object,” she says. “It’s hard to express how cool it is to be the first person to lay eyes on an object in 1,500 years.

“Participating in field work has also given me a better appreciation for the process by which an object is dug from the ground and becomes usable, meaningful data. Before I was only familiar with the end product of field work, the summaries of findings and discussions of significance you find in books and journal articles.”

So far, many of the artifacts and materials are from the fifth and sixth centuries. And it’s during this period that Bernard sees a shift in the building’s function.

“We were finding this interesting mix of material – really nice glass and bronze vessels and coins and high-quality imported pottery from Africa, but also tools or commercial objects like weights,” says Bernard.

“We’re seeing this transformation of urban space, which I thought was really cool. You have wealth, but you also have craft work, you have this intermingling of spatial function that you're not seeing in the early periods – and that got my blood going.”

While Bernard is delighted with the discoveries and findings so far, he wants to dig deeper, so to speak, to find evidence from the second century – the city’s true origins.

“I want that earlier period,” he says. “But I also want to be able to say, here's how life in the city changed over time.” 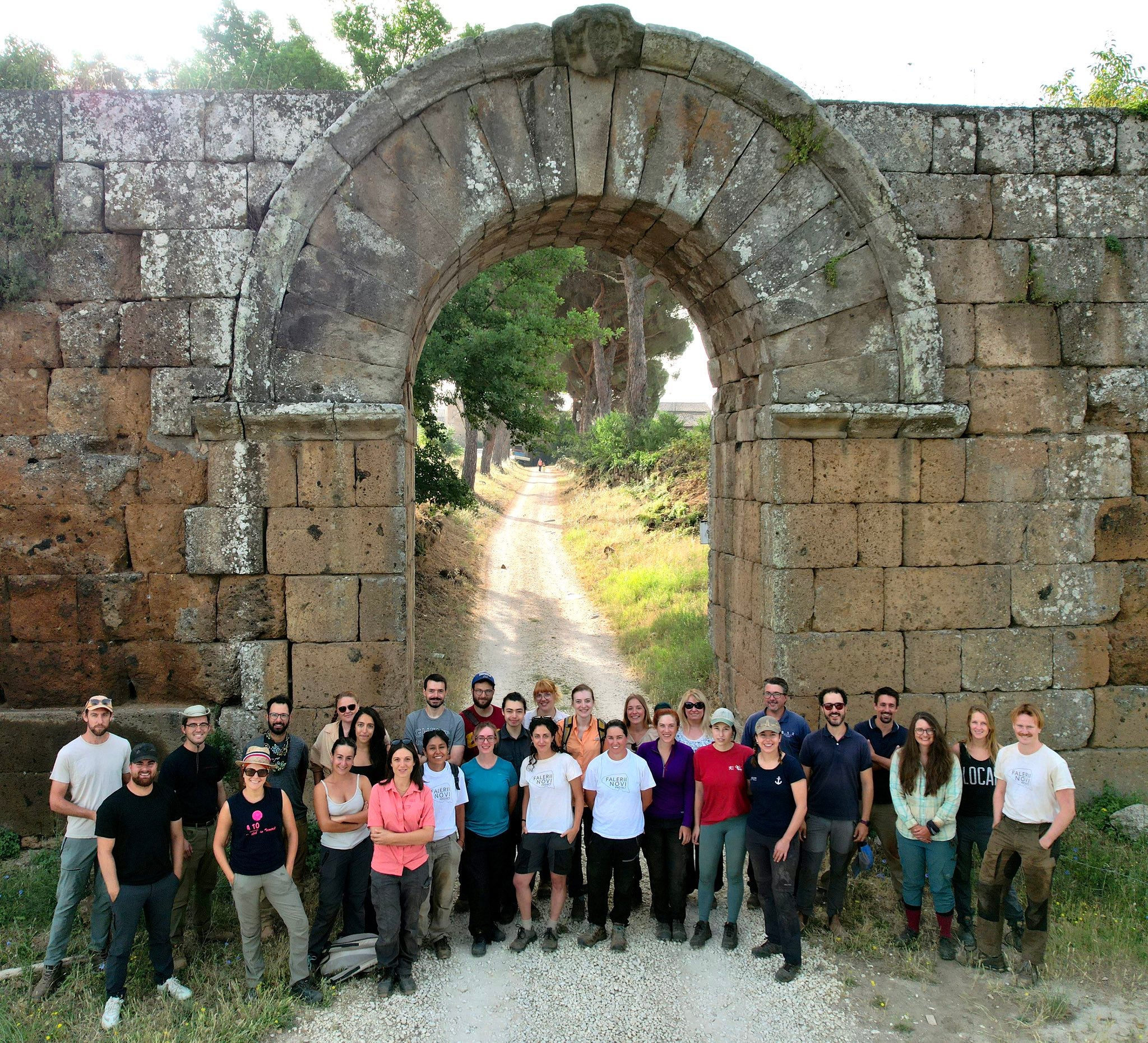 Bernard says he can’t wait to return to Italy next summer, although he plans on visiting the site a couple of times before then “to see my colleagues and make sure things are running smoothly,” he says.

In the meantime, the preservation and analysis of the materials found is ongoing. “You spend all this time getting the materials and data, but then you’ve got to process the data and that takes a while,” says Bernard.

As the data comes in and new information is revealed, Falerii Novi’s story will inevitably change, expand and become richer.

“You're constantly rebuilding, reassessing, reforming that narrative,” Bernard says. “You're always thinking about how that narrative will emerge.”