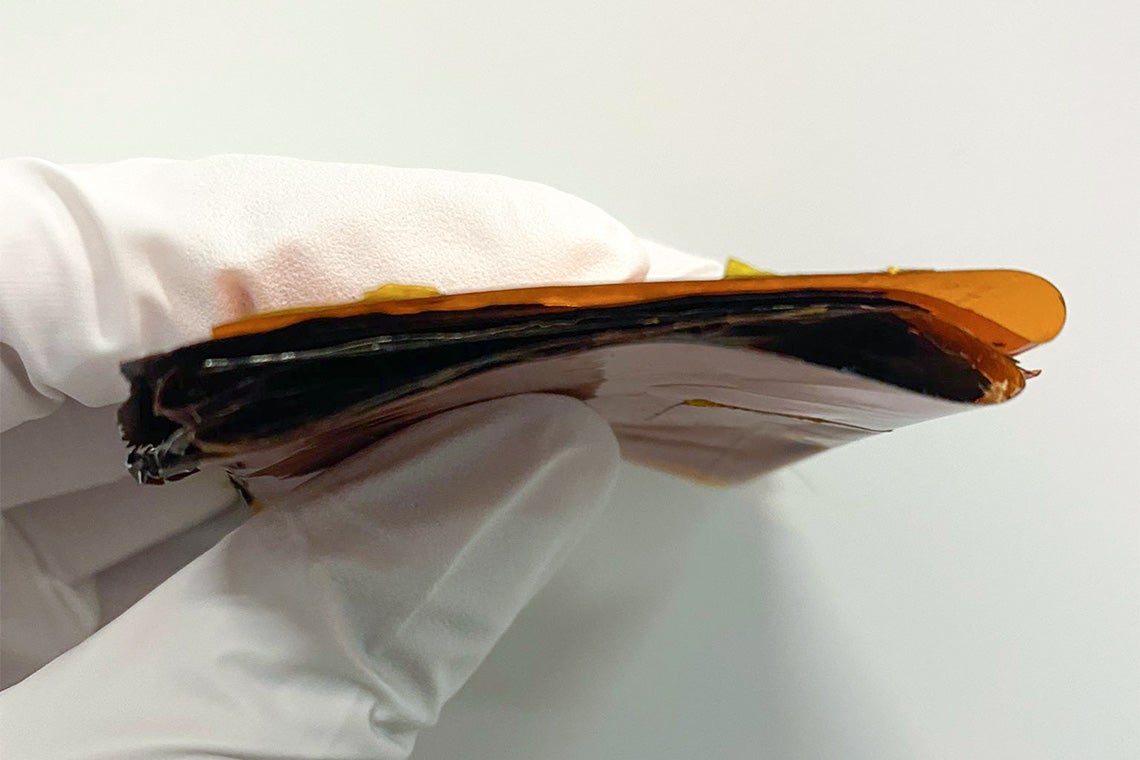 Wood-derived materials can be used to harvest electrical energy from everyday movements such as walking, according to University of Toronto and University of Waterloo researchers.

In a new study recently published in Nano Energy, the team demonstrated the use of lignocellulosic nanofibrils – derived from tree bark – in a prototype self-powered device capable of sending a wireless signal to a smartphone via bluetooth.

Such devices can be used to track biometric data such as heart rate, oxygen levels or skin conductivity. The innovation could improve the performance of these devices while lowering their environmental impact.

“Biosensors are common in wearable electronics, but today they are powered by batteries,” says Ning Yan, a professor in the department of chemical engineering and applied chemistry in the Faculty of Applied Science & Engineering, and a co-author of the study.

“This makes them bulky, inconvenient and costly. Sensors without batteries could be thinner, smaller and cheaper. You would never again have to worry about forgetting to charge the battery. You could just stick it on your skin, and it would be powered by your natural movements,” she added.

The principle behind the innovation is the trioboelectric effect, a form of static electricity. Because some materials attract electrons more than others, repeatedly bringing two different materials in contact and then separating them can cause an electrical charge to build up between them.

Researchers from around the world are experimenting with devices known as triboelectric nanogenerators, which make use of this effect to generate small amounts of electricity.

Most current designs incorporate synthetic materials such as polytetrafluoroethylene (PTFE), also known under the brand name Teflon. However, this material persists for long periods of time in the environment and concerns have been raised about its potential health effects.

Yan and her team wanted to see if it was possible to create a natural, biodegradable substitute.

“There has been some experimentation with using natural materials such as cellulose in these types of triboelectric generators,” says Yan. “But most teams have used cellulose only in the layer that loses electrons, which we call the tribopositive layer. We wanted to develop a natural substitute for the other side, the tribonegative layer.”

The new material is made of nanofibrils, tiny strands of plant material hundreds of thousands of times thinner than a human hair. Where other teams have used nanofibrils made of cellulose – the main plant polymer in paper and carboard – Yan and her team also incorporated another natural polymer known as lignin.

“Lignin is a complex, branching molecule,” says Nicolas Tanguy, a co-lead author on the new paper who conducted the research as a post-doctoral fellow in Yan's lab (he is now at Universidad Nacional Autónoma de México).

“In many pulp and paper products, lignin is an impurity to be removed. But in this case, we found that leaving about 30 per cent lignin in the nanofibrils actually improved their performance as tribonegative materials.”

The U of T Engineering team sent the lignocellulosic nanofibrils to Professor Dayan Ban and his team at the University of Waterloo's department of electrical and computer engineering. They incorporated the material into a prototype triboelectric nanogenerator.

“Our key challenges were finding a highly efficient way to convert mechanical energy into electrical energy and then storing enough of that energy to power the system,” says Ban, who completed his doctorate at U of T. “It was rewarding to achieve that while also limiting the environmental footprint of the multi-function system.”

This device was able to generate 160 per cent more voltage and 140 per cent more current when compared with a similar device that used PTFE as the tribonegative layer.

Simply by tapping the device on an acrylic plate during testing, the prototype was able to generate enough power to send out a radio-frequency ping every three minutes that was picked up by a nearby smartphone.

In theory, such a device could be inserted into the sole of a shoe, with the user generating electricity while walking or running. The device could be used to power a biosensor or any other device that sends data wirelessly.

“Not only does this material perform better than PTFE, but it is also biodegradable,” Yan says. “This would make it very useful in single-use biosensors. By eliminating both the battery and the PTFE, we are greatly reducing the environmental impact.”