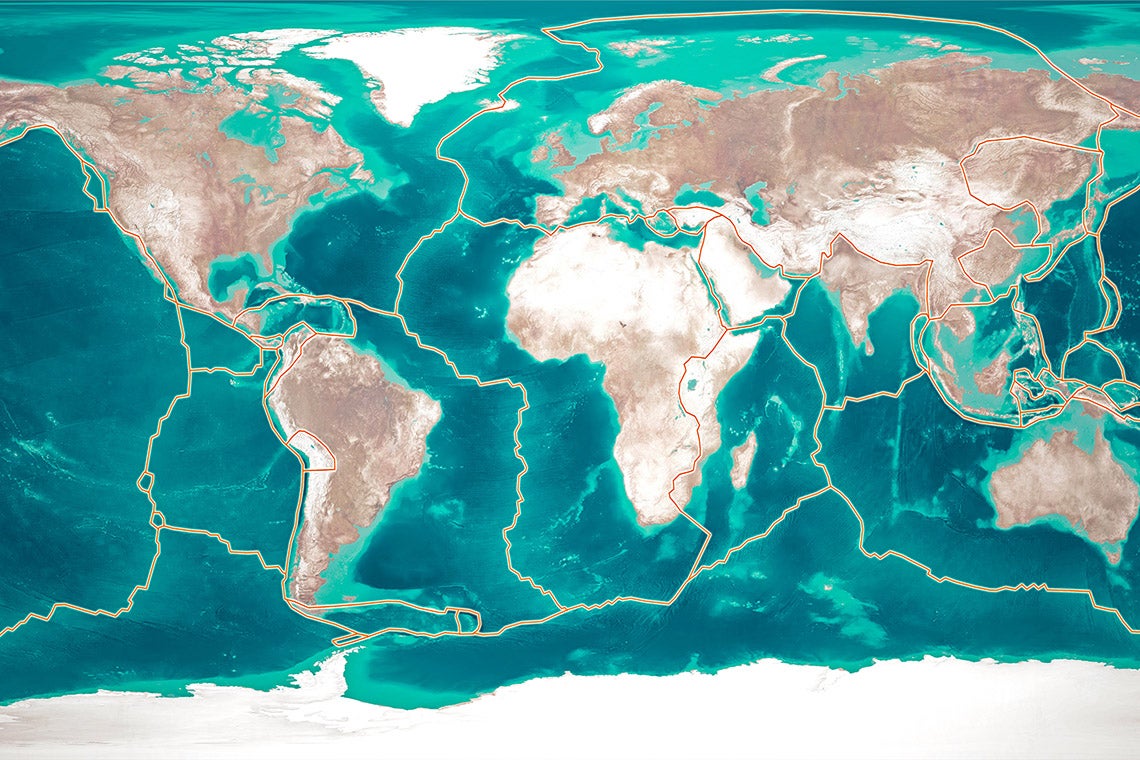 In a finding that sheds new light on plate tectonics, researchers say the plates on which Earth’s oceans sit are being pulled apart by massive tectonic forces even as they drift about the globe (image by Naeblys via Shutterstock)

Geoscientists at the University of Toronto and Istanbul Technical University have discovered a process in plate tectonics that shows tremendous damage occurs to areas of Earth’s crust long before it should be geologically altered by known plate-boundary processes – a finding that sheds new light on the planet’s tectonic cycle.

Plate tectonics, an accepted theory for more than 60 years that explains the geologic processes occurring below the surface of Earth, holds that its outer shell is fragmented into continent-sized blocks of solid rock – called “plates” – that slide over Earth's mantle, the rocky inner layer above the planet’s core. As the plates drift around and collide with each other over million-years-long periods, they produce everything from volcanoes and earthquakes to mountain ranges and deep ocean trenches at the boundaries where the plates collide.

Now, using supercomputer modelling, the researchers show that the plates on which Earth’s oceans sit are being torn apart by massive tectonic forces even as they drift about the globe. The findings are reported in a study published in the journal Nature Geoscience.

“Our work discovers that a completely different part of the plate is being pulled apart because of the subduction process, and at a remarkably early phase of the tectonic cycle,” said Erkan Gün, a PhD candidate in the department of Earth sciences in the Faculty of Arts & Science who is lead author of the study.

Up to now, the focus has been on the geological deformation of drifting plates at their boundaries after they had reached a subduction zone – such as the Marianas Trench in the Pacific Ocean, where the massive Pacific Plate dives beneath the smaller Philippine Plate and is recycled into Earth’s mantle. 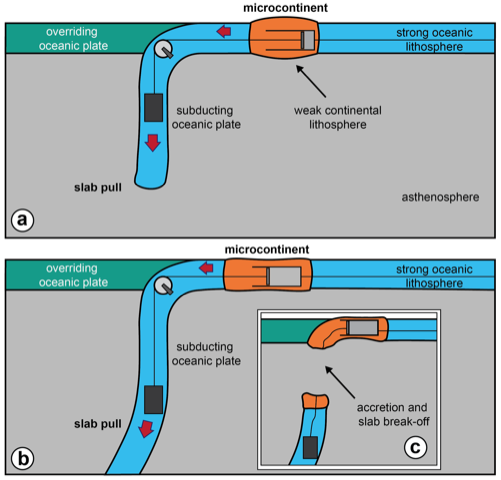 But the new research shows much earlier damage to the drifting plate further away from the boundaries of two colliding plates, focused around zones of microcontinents – continental crustal fragments that have broken off from main continental masses to form distinct islands often several hundred kilometers from their place of origin.

The researchers term the mechanism a “subduction pulley,” where the weight of the subducting portion that dives beneath another tectonic plate pulls on the drifting ocean plate and tears apart the weak microcontinent sections in an early phase of potentially significant damage.

“The damage occurs long before the microcontinent fragment reaches its fate to be consumed in a subduction zone at the boundaries of the colliding plates,” said Russell Pysklywec, professor and chair of the department of Earth sciences and a co-author of the study.

He said another way to look at it is to think of the drifting ocean plate as an airport baggage conveyor, with microcontinents like pieces of luggage travelling on the conveyor.

“The conveyor system itself is actually tearing apart the luggage as it travels around the carousel before the luggage even reaches its owner.”

The researchers arrived at the results following a mysterious observation of major extension of rocks in alpine regions in Italy and Turkey. The observations suggested that the tectonic plates that brought the rocks to their current location were already highly damaged prior to the collisional and mountain-building events that normally cause deformation.

“We devised and conducted computational Earth models to investigate a process to account for the observations,” said Gün. “It turned out that the temperature and pressure rock histories that we measured with the virtual Earth models match closely with the enigmatic rock evolution observed in Italy and Turkey.”

The findings refine some of the fundamental aspects of plate tectonics and call for a revised understanding of this fundamental theory in geoscience, the researchers say.

“Normally we assume – and teach – that the ocean plate conveyor is too strong to be damaged as it drifts around the globe, but we prove otherwise,” said Pysklywec.

The findings build on the legacy of J. Tuzo Wilson, also a U of T scientist, and a renowned figure in geosciences who pioneered the idea of plate tectonics in the 1960s.