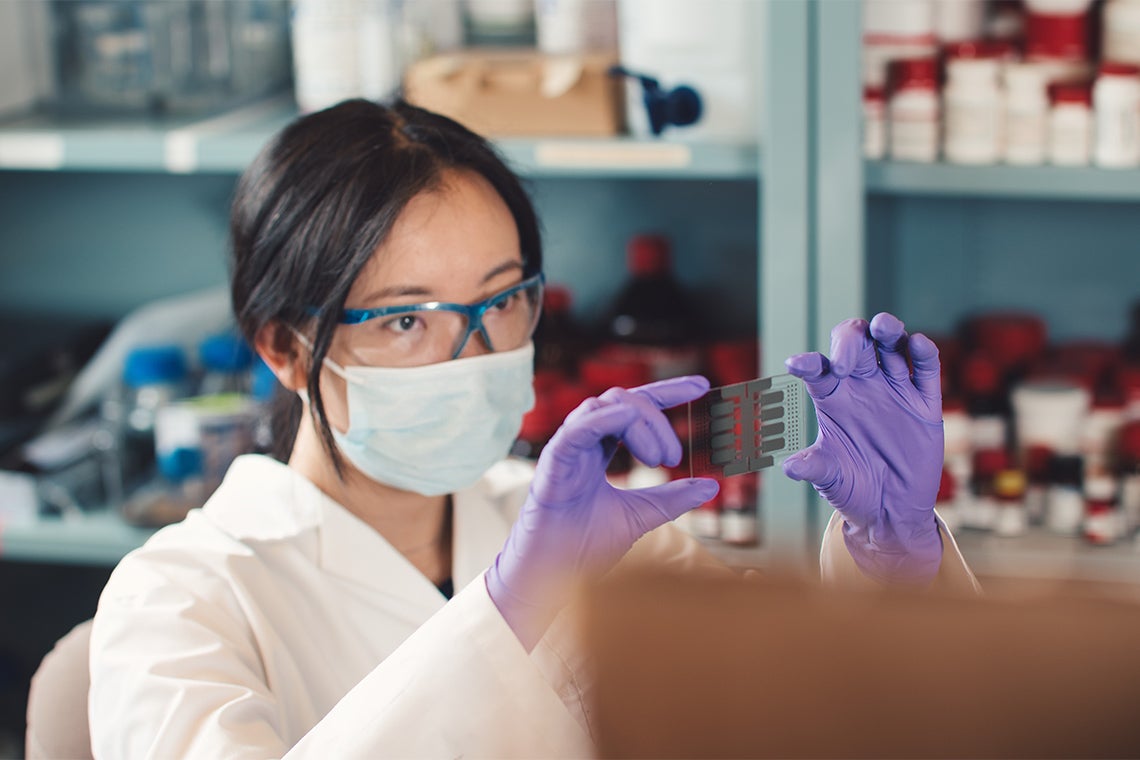 “Using the tool we developed, researchers in the future can develop therapeutics that target some of these genes to halt the cancer metastasis,” Betty Li said. (photo by Michael Dryden)

A group of researchers from the University of Toronto has developed a credit-card sized tool for growing cancer cells outside the human body, which they believe will enhance their understanding of breast cancer metastasis.

The device, described in a paper published on July 15 in Science Advances, reproduces various environments within the human body where breast cancer cells live. Studying the cells as they go through the process of invasion and metastasis could point the way toward new biomarkers and drugs to diagnose and treat cancer.

“Metastasis is what makes cancer so deadly,” said the publication's corresponding author  Aaron Wheeler, a professor in the Institute of Biomedical Engineering in the Faculty of Applied Science & Engineering, whose lab is located in the Donnelly Centre for Cellular and Biomolecular Research in U of T's Faculty of Medicine.

“If cancer cells would simply stay in one spot, it would be ‘easy’ to excise them and cure the disease. But when cancer metastasizes, cancer cells move through the body, making the disease difficult to treat.

“We decided to apply our expertise in microfluidics to develop a new tool to aid in studying how cancer cells begin to invade into surrounding tissues in the first steps in metastasis.”

Normally metastasis is studied in a petri dish cell culture or in whole animals. However, these model systems present problems in terms of cost, efficiency, or lack of representation.

“An oversimplified system like cells in petri dishes doesn’t mimic what happens in the body, while in an animal model, it’s difficult to isolate and study parameters that govern the invasiveness of a cell,” said Betty Li, a senior Institute of Biomedical Engineering PhD student and lead author of the paper.

“Our system gives us control over all the specific parameters that we want to look at, while allowing us to make structures that better resemble what happens to the body.”

The device consists of patterned metal electrodes which can move extremely small droplets around through the use of electric fields. By selectively changing the water-repelling properties of the surface at various points, researchers can ‘pinch’ off the water droplets and form precise shapes.

In the paper, the researchers describe how they used a collagen matrix coated with a layer of basal membrane extract to mimic the structure of the breast tissue seen by breast cancer cells during the first step of metastasis.

By placing cancer cells outside of these tissue mimics, researchers could observe the invasion process in detail, including measurements of speed and location.

“One interesting thing we observed is that not all cancer cells within the same population have the same invasiveness,” Li said. “Some invaded into the tissue mimics while others did not, which prompted us to look at what gives the invaded cells such an advantage.”

Li and her team extracted cancer cells at various distances from the invasion point and subjected these cells to genetic sequencing.

“We identified 244 different genes that are differentially expressed between the cancer cells that invaded versus the ones that didn’t invade,” Li said. “This means that using the tool we developed, researchers in the future can develop therapeutics that target some of these genes to halt the cancer metastasis.”

“We think this type of tool will be quite useful to the community, as cell invasion is important in cancer and also a host of other (non-pathological) processes, like tissue growth, differentiation and repair,” Wheeler said.

This research was funded by the National Sciences and Engineering Research Council of Canada, the Canada Foundation for Innovation, the Province of Ontario, and by U of T's Medicine by Design initiative, which receives funding from the Canada First Research Excellence Fund.