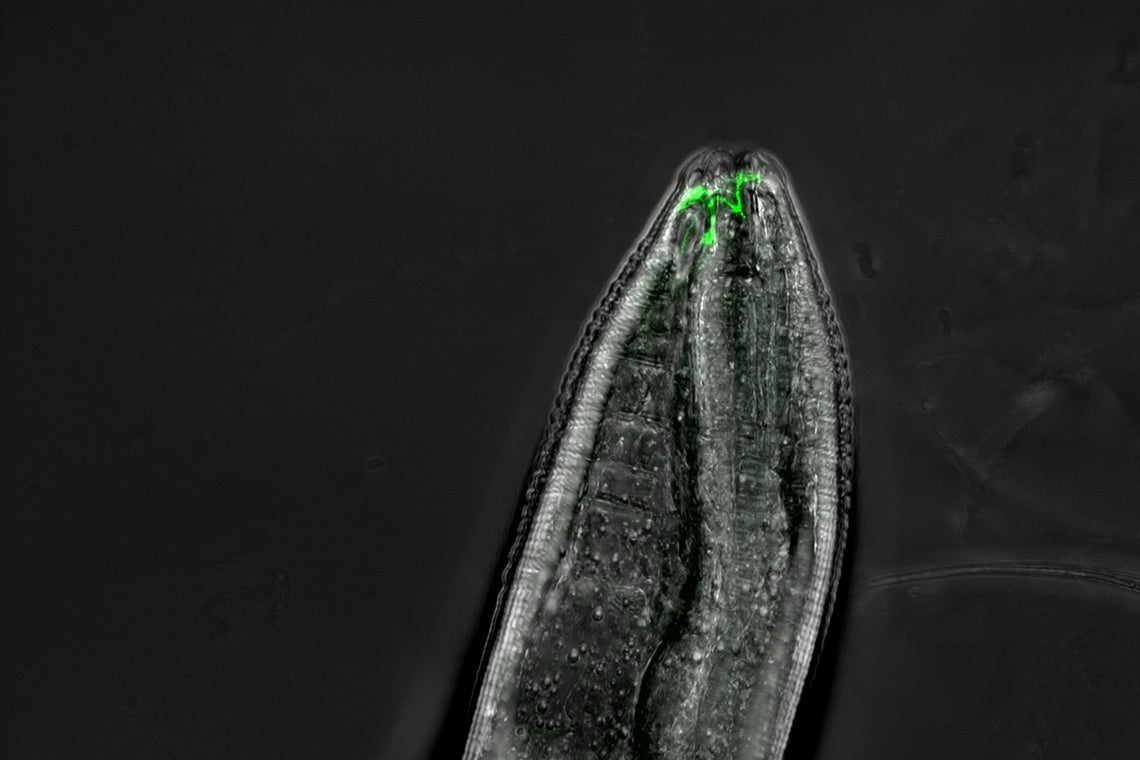 The head of an adult C. elegans worm, with the olfactory neuron expressing a particular type of odorant receptor shown in green (image by Daniel Merritt)

Soil-dwelling nematodes depend on their sophisticated sense of smell for survival, able to distinguish between more than a thousand different scents – but the molecular mechanism behind their olfaction has baffled scientists for decades.

Now, researchers at the University of Toronto's Terrence Donnelly Centre for Cellular & Biomolecular Research appear to have solved the long-standing mystery – and the implications of their findings stretch beyond nematode olfaction, perhaps offering insights into how the human brain functions.

Derek van der Kooy, a professor of molecular genetics at the Donnelly Centre in the Temerty Faculty of Medicine, led a research team that uncovered the molecular mechanism behind the worms' sense of smell, suggesting that it involves a conserved protein that helps equilibrate vision in humans.

The van der Kooy lab is renowned for its neuroscience research that uses a variety of model organisms, including the nematode Caenorhabditis elegans.

The researchers' study was published in the Proceedings of the National Academy of Sciences (PNAS) last week.

“The worms have an incredible sense of smell – it’s absolutely amazing,” says Daniel Merritt, a first co-author on the paper and recent PhD graduate who worked in the van der Kooy lab.

“They can detect a very wide variety of compounds, such as molecules released from soil, fruit, flowers and bacteria. They can even smell explosives and cancer biomarkers in the urine of patients,” he adds.

C. elegans are champion sniffers thanks to their 1,300 odorant receptors. As in humans, who possess a mere 400 receptors, each receptor is dedicated to sensing one type of smell – but that's where the similarities end.

Human noses are lined with hundreds of sensory neurons, each expressing only one receptor type. When an odorant activates a given neuron, the signal travels deeper into the brain along its long process, or axon, where it is perceived as smell. Smell discrimination is enabled by a physical separation of axonal cables carrying different smell signals.

The worms, however, have only 32 olfactory neurons, which hold all of their 1,300 receptors.

“Clearly, the one-neuron-one-smell strategy is not going to work here,” Merritt says.

Yet, the worms can discriminate between different smells sensed by the same neuron. Pioneering research from the early 1990s showed that when exposed to two attractive odours, where one is uniformly present and the other is localized, the worms crawl towards the latter. But how this behaviour is regulated at the molecular level remained unclear.

“It seems that all the information that is sensed by this neuron gets compressed into one signal, and yet the worm can somehow tell the difference between the upstream components. That’s where we came to it,” Merritt says.

Merritt and former master’s of science graduate Isabel MacKay-Clackett, a co-first author on the paper, reasoned that perhaps the worms are sensing how strong the smells are.

According to their hypothesis, the smells that are everywhere are not the most informative cues and would become desensitized in some way, meaning the worms would ignore them. This would leave the weakly present smells, which might be more useful in guiding behaviour, able to activate their receptors and cause signal transduction.

They also had a hunch for how this could work at the molecular level. A protein named arrestin is a well-established desensitizer of the so-called G protein coupled receptors (GPCRs), a large family of proteins that perceive external stimuli, which odorant receptors belong to. Arrestins for example allow us to adjust vision in bright light by damping down signalling through the photon-sensing receptors in the retina.

The team wondered if arrestin might also act in worms to desensitize receptors for a stronger smell in favour of those for a weaker one, when both are sensed by the same neuron. To test their hypothesis, they exposed the worms lacking the arrestin gene to two different attractive smells in a Petri dish. They mixed one smell into the agar medium to make it uniform, and put the worms on top. The other smell was placed at one spot some distance from the worms.

Without arrestin, the worms were no longer able find the source of the weaker smell. Like in the human eye squinting in bright sunshine, arrestin helps remove an overpowering sensation – ambient smell in this case – so that the worms can sense a localized smell and move towards it, MacKay-Clackett says.

Arrestin is not required, however, when the smells are sensed with different neurons, suggesting that the worms employ the same discrimination strategy as the vertebrates when the smell signals travel down different axons.

The team looked at different sets of smells and neurons and found they all obeyed the same logic, Merritt says. They also used drugs to block arrestin and found that this too abolished smell discrimination.

The finding is significant because it is the first evidence showing that arrestin can fine tune multiple sensations.

“There is no case known in biology before this where arrestin is being used to allow for discrimination of signals external to the cell,” Merritt says.

He adds that the same mechanism could be playing out in other animals when multiple GPCRs are expressed on the same cell, especially in the brain. Our brains are bathed in neurochemicals that signal through hundreds of different GPCRs, raising a possibility that arrestin, of which there are four types in humans, could be key for information processing.

“Our work provides one piece of puzzle how the worms’ amazing sense of smell works, but it also informs our understanding of how GPCR signalling works more broadly within animals,” Merritt says.

The team's research was supported by the Canadian Institutes of Health Research and the Natural Sciences and Engineering Research Council of Canada.