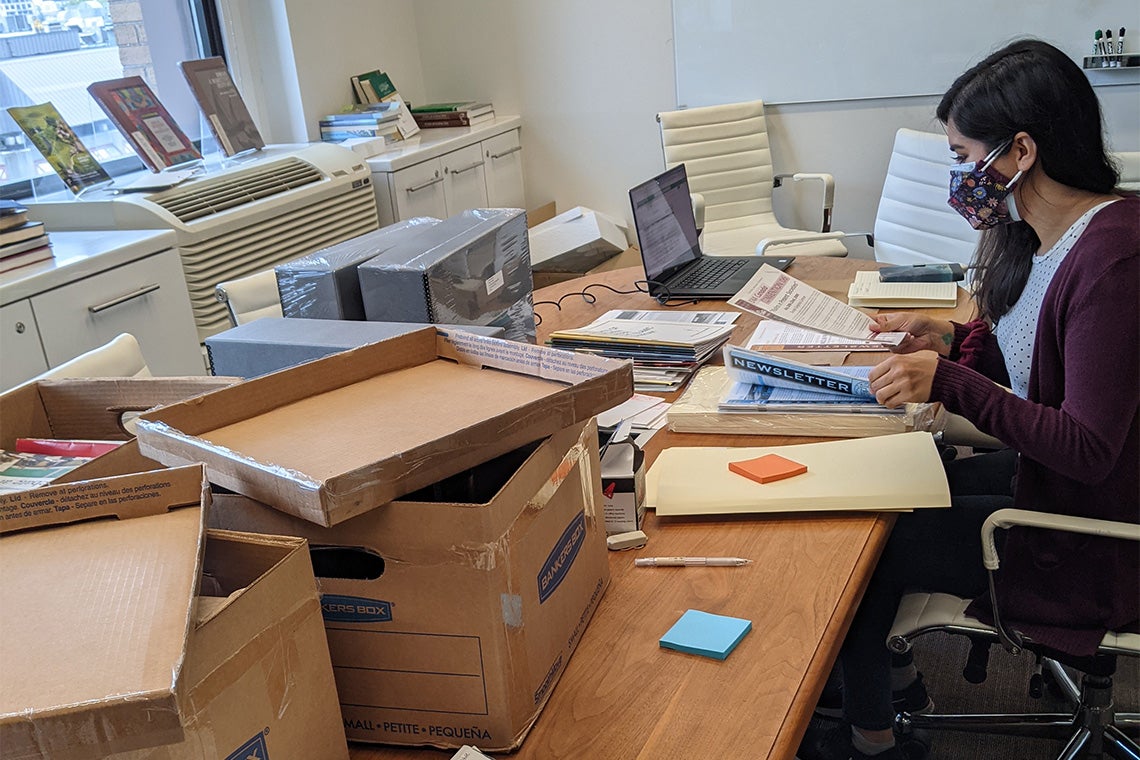 Archivist Moska Rokay helps collect stories, documents and images as part of the Muslims in Canada Archives project, which aims to bring an often-overlooked part of the country's history to life (photo by Emily Moran)

As an archivist on the Muslims in Canada Archives (MiCA) project, Moska Rokay doesn't just preserve the past – she unearths it. 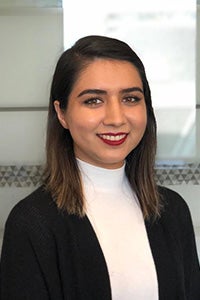 Rokay, a graduate of the University of Toronto's master of information program in the Faculty of Information, speaks to Canadians across the country to collect stories, documents and images that bring the rich history of Muslims in Canada to life.

“For instance, many people I have spoken to recall attending a co-ed Muslim youth summer camp in the 1980s and 90s, pre 9/11,” she says. “It’s been fascinating to speak to so many different people who each have fond memories of this time, like playing sports, learning how to canoe, doing arts and crafts, and, of course, participating in lectures on Islam.”

Although it's changed names and locations over the years, the camp still exists as Ontario's Camp Deen. Rokay has spoken to many Muslims across Ontario who has attended what's now known as Camp Deen, as first step toward piecing together the camp's history.

That's just one example of the kinds of stories in the MiCA project that illuminates how Muslim Canadians fit within Canada's broader historical narrative, says Institute of Islamic Studies Director Anver Emon.

“Muslims have been in Canada since Confederation, but their stories are not robustly told anywhere,” says Emon, who is also a professor in the Faculty of Law and department of history in the Faculty of Arts & Science, and Canada Research Chair in Islamic Law and History. “Not much is known about the early history of Muslims in Canada, or the current history they make each day alongside other communities.”

The archive is also helping to recalibrate present-day conversations about Islam and Muslims. “Canadian Muslims have too often been subject to stereotypes, prejudice and creeping Islamophobia,” Emon explains. “These biased representations will not go away overnight, which is where MiCA comes in – by speaking back to an Islamophobic narrative, one story at a time.”

Sadia Zaman, CEO of the Inspirit Foundation and one of MiCA’s partners, says that collaborating with organizations from different sectors is important because the dominant narrative in public discourse is very powerful: “It requires us all to work together to create a different one,” she says.

“The participatory nature of this archive is crucial to help tell the complex, multifaceted and nuanced story of Muslim presence in Canada. And its academic rigour is needed to help build the foundation for those stories so that they can be disseminated and made accessible.” 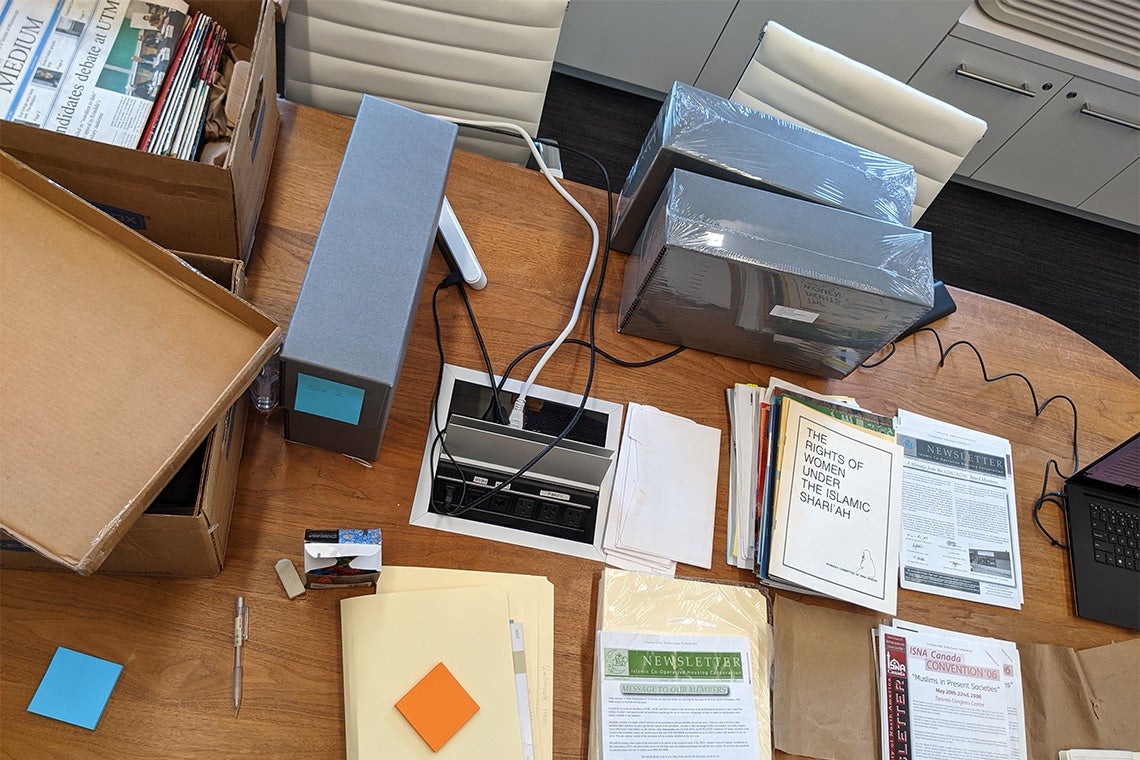 Supported by the Canadian government, the archive plans to expand its scope from Ontario, Quebec and Newfoundland and Labrador to the rest of the country (photo by Emily Moran)

In a 2019 environmental scan of Canadian archives, Rokay found that Muslims were not only underrepresented, they were often categorized using ethnic groupings but not also religion.

In the report, Rokay says: “[A]t best, the ‘Muslim’ experience can only be inferred. At worst, this erases minority religious groups from Canada’s archival holdings at a time when religious identity has become a very public and political touchstone in recent elections. 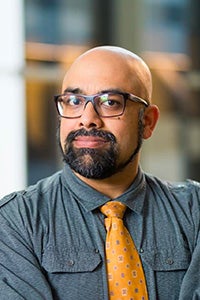 “From Quebec’s attack on the headscarf to right-wing extremism that resulted in the terrorist attack at a Quebec City mosque, being Muslim is often associated with a national security and threat narrative that dehumanizes a portion of Canada’s citizenry.”

Documenting the voices of marginalized communities is key to supporting an inclusive, multicultural Canada, says journalist and editor Haroon Siddiqui, chair of the IIS advisory board and a senior fellow at Massey College, an independent graduate college affiliated with U of T.

"A great achievement of contemporary Canada has been to bestow equality and equal dignity on all demographic groups. Our next challenge is to extend equal dignity of portrayal,” Siddiqui explains. "With a digital archive like MiCA, Muslims across Canada can now follow in the tradition of other Canadian communities who’ve enriched us all with their stories.”

The Canadian government recently pledged $4 million in funding to MiCA and the project members' goal to document the history of Canada's diverse Muslim communities.

Emon says the funding will enable MiCA to expand its scope from eastern and central Canada (Ontario, Quebec and Newfoundland and Labrador) to the rest of the country. It will also support the latest stage of the project: making the vibrant history of Muslims in Canada accessible to the public, using a curated digital storytelling portal.

“When watching the news, it’s hard not to notice that from rural communities to small towns to Canada’s major cities, we are all contending with how an increasingly diverse demographic can share their lives, their stories, and all the while remain in political community,” Emon says.

“To tell stories together – whatever your race, creed, ethnicity or culture – requires the ‘stuff’ with which we tell stories. As grade-school students, we used this ‘stuff’ when we shared with our classmates in show-and-tell. Historians use this ‘stuff’ called primary sources to empirically ground their research. Artists might find inspiration in this ‘stuff’ to write a poem, compose a musical score or paint a canvas.

“As one step in systemic change, MiCA stewards that ‘stuff’ with the conviction that whatever it may be, it is rich with storytelling possibilities – ones that empower Muslims in Canada to speak for themselves.”