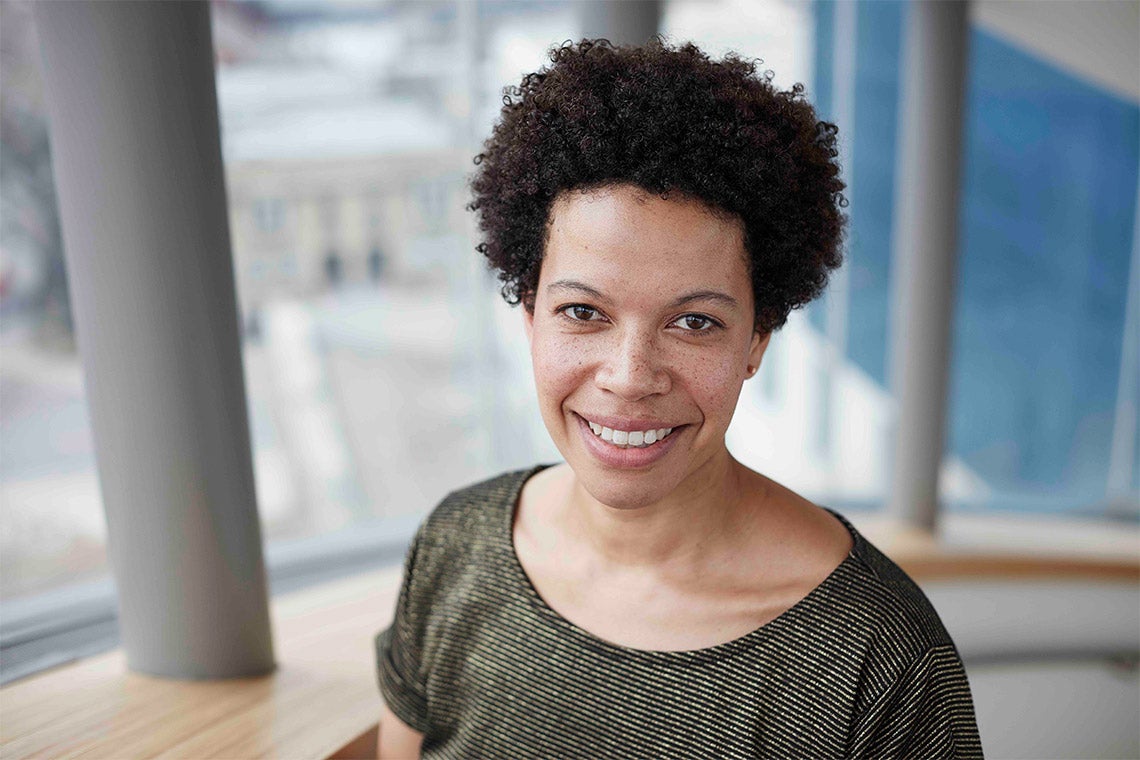 Seika Boye, an assistant professor, teaching stream, at the Centre for Drama, Theatre & Performance Studies, began her career as a professional dancer and now conducts research on dancing and Blackness in Canada (photo by Craig Boyko)

An exhibit curated by Seika Boye, a researcher at the University of Toronto, is preserving seven decades-worth of Black dance performance history in Canada.

“It’s About Time: Dancing Black in Canada 1900-1970 and Now” is an archival exhibition that highlights the undocumented history of Black dance performance in Canada from the time period.

Boye, whose career began as a professional modern and postmodern dance artist, now conducts research and creative works to ensure this history takes center stage after her students continuously asked about the scarcity of resources in Canadian academia about Black performance in the country.

“What is suggested when there aren’t resources to share about something is that it didn’t happen,” says Boye, an assistant professor, teaching stream, at the Centre for Drama, Theatre & Performance Studies in the Faculty of Arts & Science. “And of course, I knew that wasn’t true.”

Launched in 2018, “It’s About Time” documents Black Canadian dance performance history through five themes, which include the biographies of influential performers, media representation and reception of performance, and the community spaces that acted as hubs for dance. It also examines the legislation that tried to stop it – and the activism that followed. It has appeared in Ontario and Alberta, and is currently on display at the Audain and Teck Galleries at Simon Fraser University in Burnaby, B.C.

“People have always been keeping their personal archives, their family archives. But my work had in mind bringing those resources together, hearing from different people, and doing the archival research,” Boye says.

Each exhibit theme is conveyed through an array of artifacts, including newspaper clippings from the Toronto Daily Star and Globe and Mail that document events and legislation that excluded racial and ethnic groups from dancing or entering venues. “It’s About Time” also features artist portraits and souvenirs such as ticket stubs that showcase community efforts to create spaces for performance and training.

“My research asks, where were Black people dancing in Canada and what kind of dancing were they doing? We then move into questions about where people were allowed to dance, where they felt safe or safer dancing, and where they felt they were free to dance as they wanted to,” Boye says.

Safe spaces included University Settlement House in Toronto or the Negro Community Centre in Montreal, where lessons in tap dance and ballet were held. Additionally, social dances, concerts and recitals were a source of positive outlets for Black youth in the early to mid-twentieth century.

As “It’s About Time grows,” Boye’s other research initiatives on the topic have become intertwined with the exhibit. She is a co-investigator of the Social Sciences and Humanities Research Council of Canada Partnership Development Grant funded project “Gatherings: Archival and Oral Histories of Performance.” Together with researchers across Canada, Boye continues to archive oral histories of Canadian performance, including stories of the performers.

Boye has been interviewing people for more than 15 years as a dance writer and researcher prior to beginning her doctoral studies in 2010. One of those interviews include Ola Skanks, a Toronto-born performer. Skanks married western interpretive dance with dances of the African diaspora and learned dances from Nigerian students on exchange in the 1950s as a U of T student. Her personal collections of photos and newspaper clippings were lent to Boye and are included in the exhibit.

Influential performers in “It’s About Time” also include Leonard Gibson, a self-taught dancer who was born in Athabasca, Alta and raised in Vancouver. Gibson’s career in dance and film includes performances on national television networks such as the CBC and BBC and the 1963 historical drama film Cleopatra.

Through the exhibit, Boye seeks to bridge the past with the present. In inviting contemporary artists to respond to the archive, Boye’s goal is to grow the exhibit’s artistic community and connect with local communities as “It’s About Time” travels the country. For Boye, contributions from modern-day artists are also an avenue to rethink the purpose of a traditional archive.

Supported by the Gatherings Project, Boye has collaborated with graphic recorder Adriana Contreras to create visual representations of hours of oral history interviews.

“This is about self-determination, and it’s very important for not only Black but other racialized communities to be a part of how their work is documented and a part of how they are remembered.”

Such contributions included that of award-winning writer and filmmaker Cheryl Foggo, who wrote a poem about her grandmother, whose family prohibited her from dancing. Titled “Even This Story is Secret,” the poem reimagined her grandmother dancing in her own space.

“Less often do we hear the histories of people who weren’t allowed to dance for religious reasons, or because dancing wasn’t considered safe, because dancing was considered a way that negative stereotypes would be reinforced in communities where assimilation was a method of survival,” Boye says.

Boye is a recipient of the Critical Digital Humanities Initiative’s UX Design for DH Accelerator Program. The program aims to deepen the exhibit’s website experience for users and researchers. “It’s About Time” will also be featured as a mobile exhibition at the Annual International Conference & Festival of Blacks in Dance in Toronto early next year. Hosted by dance Immersion and the International Association of Blacks in Dance, the event provides Black dance professionals with the opportunity to increase their visibility and network.

Originally commissioned by Dance Collection Danse, Canada’s only dedicated dance history archive and publisher, “It’s About Time” has since been supported by various university art galleries.