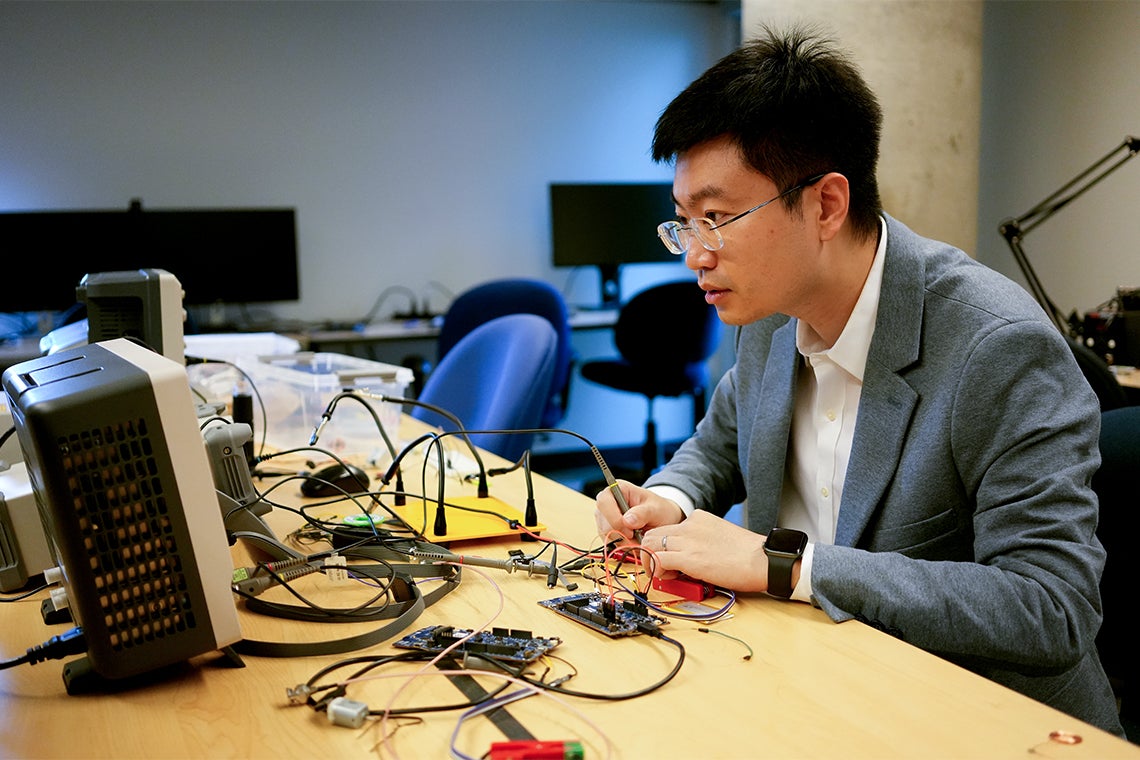 Xilin Liu tests signal integrity of a prototype neural implant, which can be used to activate a neuromodulation therapy that helps manage symptoms of brain disorders (photo by Matthew Tierney)

Neural implants can help treat brain disorders such as Parkinson’s disease and epilepsy by directly modulating abnormal activities – and the University of Toronto’s Xilin Liu is working with microelectronics and artificial intelligence to make this emerging technology both safer and smarter.

“Neurons talk to each other in part via electrical signals, and a therapeutic neural implant produces electrical stimulation – like a pacemaker for the brain,” says Liu, an assistant professor in the Faculty of Applied Science & Engineering. “In cases of tremors or seizures, the stimulation attempts to restore the neurons to a normal condition.

“It’s as if the stimulus turns the neural networks off and on – almost like restarting a computer, though it’s definitely not that simple. Scientists don’t fully understand how it works yet.”

Liu’s team integrates neural implants into miniature silicon chips via the same process for fabricating chips used in today’s computers and smartphones. This technology, referred to as CMOS for complementary metal-oxide semiconductor, allows them to reduce the device’s physical dimensions and power consumption, thus minimizing the risks associated with the implant’s initial surgical procedure and long-term use.

“We’ve developed many new microelectronic design techniques, such as high precision electrical stimulation with charge balancing,” says Liu. “We try to come at the problem from many different angles.”

Liu is part of the neurotechnology centre CRANIA, a collaboration between the University of Toronto and the University Health Network, that brings together electrical and computer engineers alongside neuroscientists, data and material scientists and clinicians. Together, they research ways to improve brain health and chart alternative treatment paths, especially for those who don’t respond well to current medications.

In a recent project, Liu and his team sought to leverage the power of AI to maximize the implants’ clinical efficacy and minimize the adverse effects of excessive stimulation. 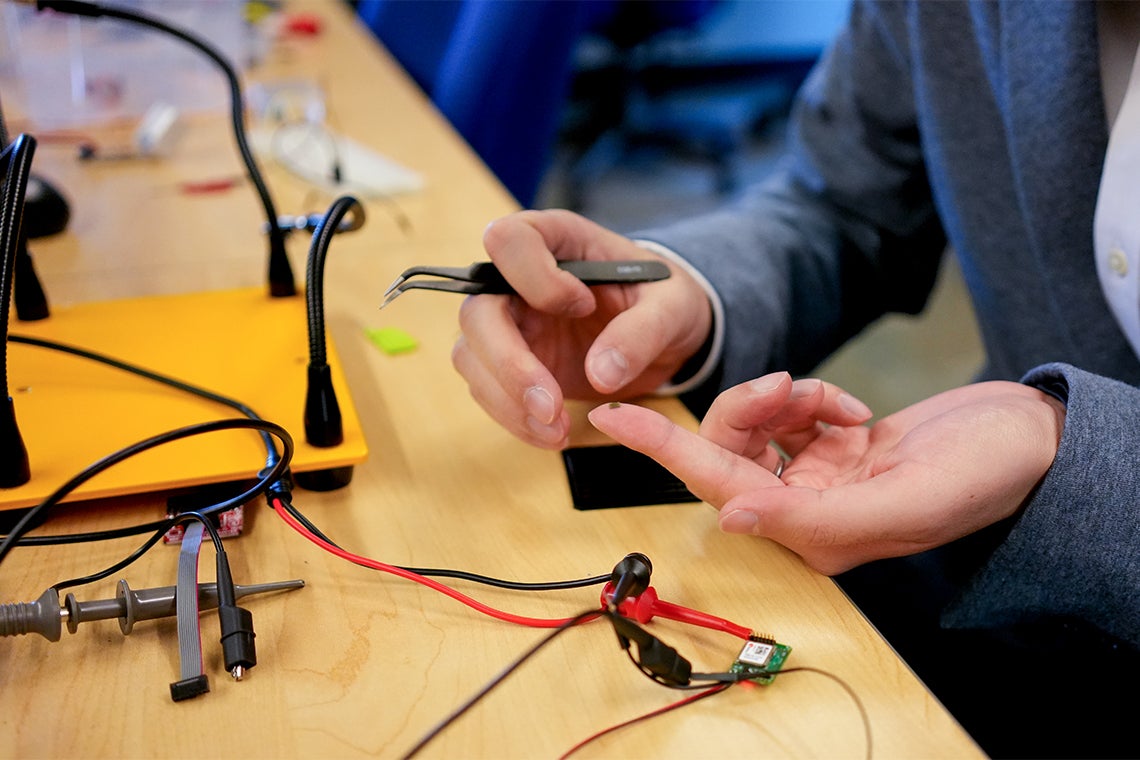 Xilin Liu holds a prototype of a neural implant chip, 3 millimetres by 3 millimetres, on the tip of his finger (photo by Matthew Tierney)

The team turned to a type of AI called deep learning (DL) – algorithms that, after being trained, can extract deep-level information when faced with novel data. These models proved to be especially powerful at identifying hidden biomarkers often neglected in conventional approaches and they outperformed conventional algorithms when detecting the optimal timing.

“Most existing implants produce electrical stimulation at a constant rate, regardless of the patient’s condition,” says Liu. “With DL, we can activate the neural implants at the optimal time and only when necessary.”

However, the high computational cost of deep learning models makes it a challenge to integrate, especially considering that it’s essential that all processing runs locally in the implants.

“The cloud would provide more processing power, but you can’t have an implant fail because it loses telecommunication service – when a patient goes into an elevator or airplane, for example,” says Liu.

To reduce this computational cost, Liu and his team developed techniques for training and optimizing the models for each patient’s condition. A recent case study showed that detection of epileptic seizures by deep learning in low-power neural implants was comparable to state-of-the-art algorithms that run in high-performance computers. This work was published in 2021 in the Journal of Neural Engineering.

Liu says that his team’s technology can be used in a broad range of clinical applications beyond epilepsy, noting that up to one billion people worldwide suffer from various brain disorders.

The necessity of open-minded collaboration is something Liu aims to impress on the graduate students who take his new neuromodulation course, debuting this fall.

“There’s so much going on in the brain,” says Liu. “You need a range of experts to understand and provide solutions for these disorders, which will only become more common as human life expectancy increases.”

“Impaired sleep has been associated with Alzheimer’s, and many people suffer from different levels of sleep disorders,” says Liu. “We are investigating closed-loop neuromodulation techniques to improve sleep quality by reinforcing or inhibiting certain brain rhythms.

“The brain is pretty amazing.”