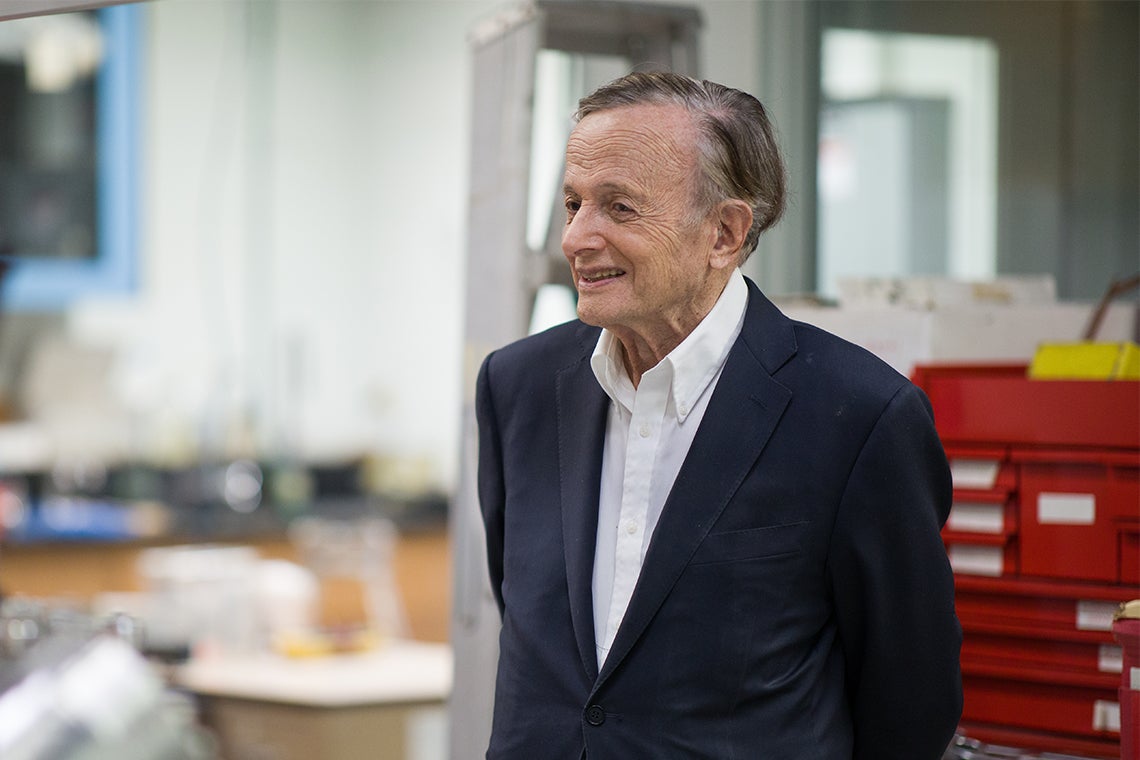 University Professor John Polanyi, a Nobel Prize-winning chemist, likened his team's discovery of a "knock-on" motion in molecules to the interaction of steel balls in a Newton’s Cradle (photo by Johnny Guatto)

Research by a team of chemists at the University of Toronto, led by Nobel Prize-winning researcher John Polanyi, is shedding new light on the behaviour of molecules as they collide and exchange atoms during chemical reaction.

The discovery, outlined in a paper published recently in Communications Chemistry, casts doubt on a 90-year-old theoretical model of the behavior of the “transition state,” which is intermediate between reagents and products in chemical reactions, opening a new area of research.

The researchers studied collisions obtained by launching a fluorine atom at the centre of a fluoromethyl molecule – made up of one carbon atom and three fluorine atoms – and observed the resulting reaction using scanning tunneling microscopy. What they saw following each collision was the ejection of a new fluorine atom moving, in a straight line, along the continuation of the direction-of-approach of the incoming fluorine atom.

“Chemists toss molecules at other molecules all the time to see what happens or in hopes of making something new,” says Polanyi, a University Professor in the department of chemistry in the Faculty of Arts & Science and the paper’s senior author.

“We found that aiming a reagent molecule at the centre of a target molecule restricts the motion of the emerging product to a single line, as if the product had been directly ‘knocked-on.’ The surprising observation that the reaction product emerges in a straight line, moving in the same direction as the incoming reagent atom, suggests that the motions that lead to reaction resemble simple onward transfer of momentum.

“The conservation of linear momentum we observe here suggests a short-lived transition state, rather than the previous view that there is sufficient time for randomization of motion. Newton would, I think, have been pleased that nature permits a simple knock-on event to describe something as complex as a chemical reaction.” 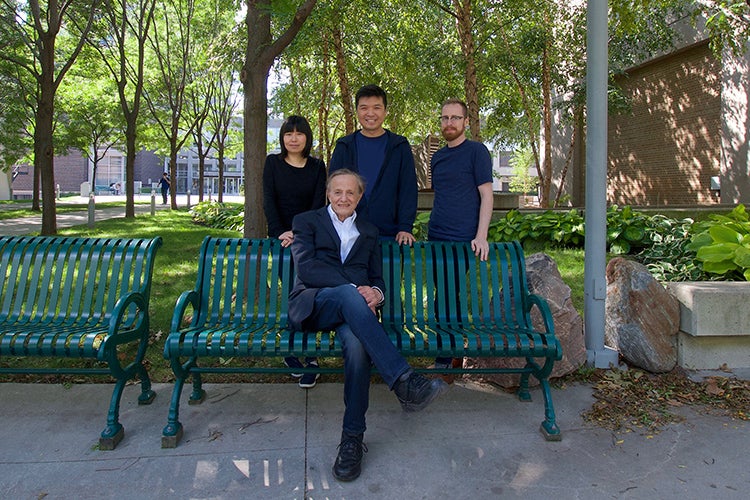 In a photo taken prior to the pandemic, University Professor John Polanyi sits on a bench on the St. George campus. Standing behind him are (from left to right): research associate Lydie Leung, PhD graduate Kelvin Anggara; graduate student Matthew Timm (photo by Diana Tyszko)

The team, which included senior research associate Lydie Leung, graduate student Matthew Timm and PhD graduate Kelvin Anggara, had previously established the means to control whether a molecule launched towards another collides head-on with its target or misses by a chosen amount – a quantity known as the impact parameter. The higher the impact parameter, the greater the distance by which the incoming molecule misses the target molecule. For the new work, the researchers employed an impact parameter of zero to give head-on collision.

“We call this new type of one-dimensional chemical reaction 'knock-on,' since we find that the product is knocked-on along the continuation of the direction of reagent approach,” says Polanyi. “The motions resemble the knock-on of the steel balls of a Newton’s Cradle. The steel balls of the cradle don't pass through one another, but efficiently transfer momentum along a single line.

“Similarly, our knock-on reactions transfer energy along rows of molecules, thereby favouring a chain-reaction. This conservation of reaction energy in knock-on chemistry could be useful as the world moves toward energy conservation. For now, it serves as an example of chemical reaction at its simplest.”

It has been known for well over a century that there is an energy barrier that chemical reagents must cross on their way to forming reaction products. An energized transition state exists briefly at the top of the barrier in a critical configuration: no transition state, no reaction.

Polanyi says the observation of a collinear “knock-on” provides insight into the reactive collision complex, which lasts for approximately one million-millionth of a second.

“Our results clearly tell us that the transition state at the top of the energy barrier lasts for so little time that it cannot fully scramble its momenta. Instead, it remembers the direction from which the attacking fluorine atom came.” 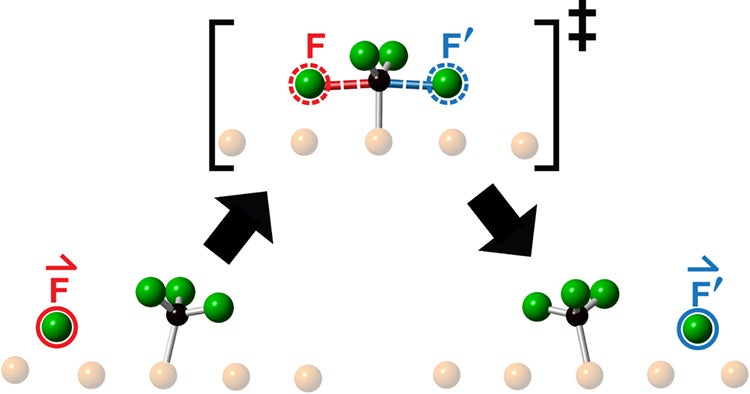 “Now, with the ability to observe the reagents and the products at the molecular level, one can see precisely how the reagents approach and subsequently how the products separate,” Polanyi says. “But this runs contrary to the classic 90-year old statistical model. If the energy and momentum were randomized in the hot transition state, the products would not exhibit a clear memory of the direction of approach of the reagents. Energy-randomization would work to erase that memory.”

The researchers say the observed directional motion of the reaction products favours a deterministic model of the transition state to replace the long-standing statistical model. Additionally, the observed reaction dynamics allow the reagent energy to be passed on in successive collinear collisions.

The research was funded in part by the Natural Sciences and Engineering Research Council of Canada (NSERC) and the University of Toronto NSERC General Research Fund. Theoretical calculations were performed on the Niagara cluster at SciNet HPC Consortium.