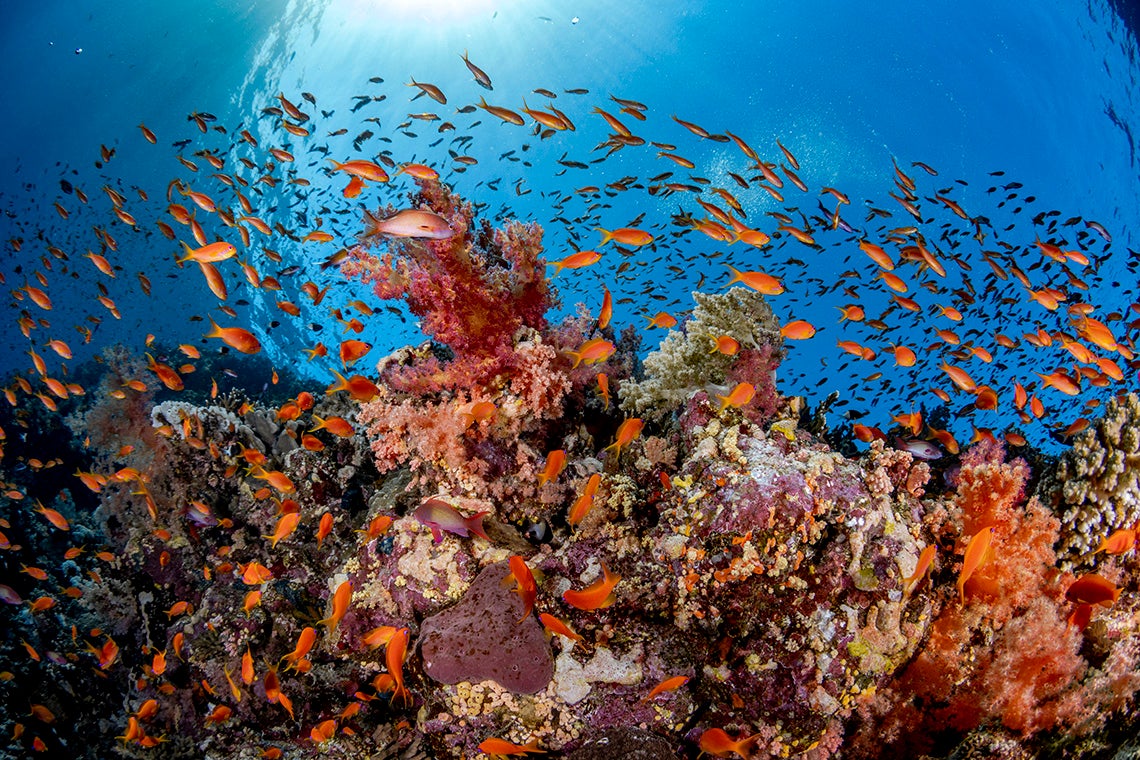 With coral reefs imperiled by climate change, coral refugia – reefs in habitats that are protected from environmental stressors – may hold the key to sustaining these diverse underwater ecosystems.

A new study by researchers at the University of Toronto, Wildlife Conservation Society and National Research Council in Italy suggests these “coral reef hope spots,” connected to other reefs in networks that carry tiny larval coral on ocean currents, may help maintain and regenerate ocean biodiversity – even after projected mass coral bleaching events.

“Our results show how crucial it is to understand coral reef networks and how they may be affected by climate change, when designing future coral reef conservation strategies,” says Ariel Greiner, lead author of the study and a PhD candidate in the department of ecology and evolutionary biology in U of T's Faculty of Arts & Science.

In the study, which appeared in Global Ecology and Biogeography, scientists modelled coral larval dispersal connections between reefs. Also known as coral connectivity, these connections form networks that serve to transport larval corals over vast distances to shuffle the gene pool and help reefs recover from coral bleaching and other disturbances.

By modelling connectivity under different scenarios of climate change and future coral bleaching, the researchers provide a glimpse of how connections between reefs might change in coming decades – and the potential of those networks to reseed reefs that are lost. Their findings may help inform future conservation strategies as coral reefs suffer the effects of climate change, ocean acidification and overfishing. Alarmingly, some models predict 70 to 99 per cent of reefs risk long-term damage due to bleaching by 2100 or earlier, the researchers note. The researchers' study pinpoints reefs that have the greatest potential to regenerate others, helping direct limited resources for conservation at a crucial time for climate action (photo by Matt Curnock)

Some existing climate-resilient coral reef strongholds are expected to have the best chance of surviving environmental stressors. If they do, the researchers found that present-day connectivity – grouped into six major networks of interconnected reefs worldwide – will be largely preserved, even if only the most climate-resilient coral reef strongholds (representing about 30 per cent of original coral reef cells) remain.

“Strategic conservation action is crucial in the face of climate change,” says Emily Darling, director of Coral Reef Conservation at WCS and an adjunct professor in the department of ecology and evolutionary biology, as well as study co-author. “Our study shows that biological connections between reefs can increase the ability of corals to recover from climate shocks and are a call to action to boost the health and function of key “source” reefs in climate-resilient networks.”

However, the researchers strike a note of caution, saying that not all coral reef habitat can be restored if only about 30 per cent of coral reef habitat is preserved “even under an optimistic reseeding paradigm.” Even if stepping stone reefs are also preserved, it will still take “several generations to reseed all reachable reef cells,” they add.

Nevertheless, the researchers say the study will help inform conservation strategies by highlighting the importance of reef connectivity to ensure their resilience in the face of climate change.

This research was supported by Bloomberg Philanthropies, The Tiffany & Co. Foundation, and by the National Science and Engineering Research Council (NSERC) Canada Graduate Scholarships and Canada Research Chairs.

With files from the WCS.