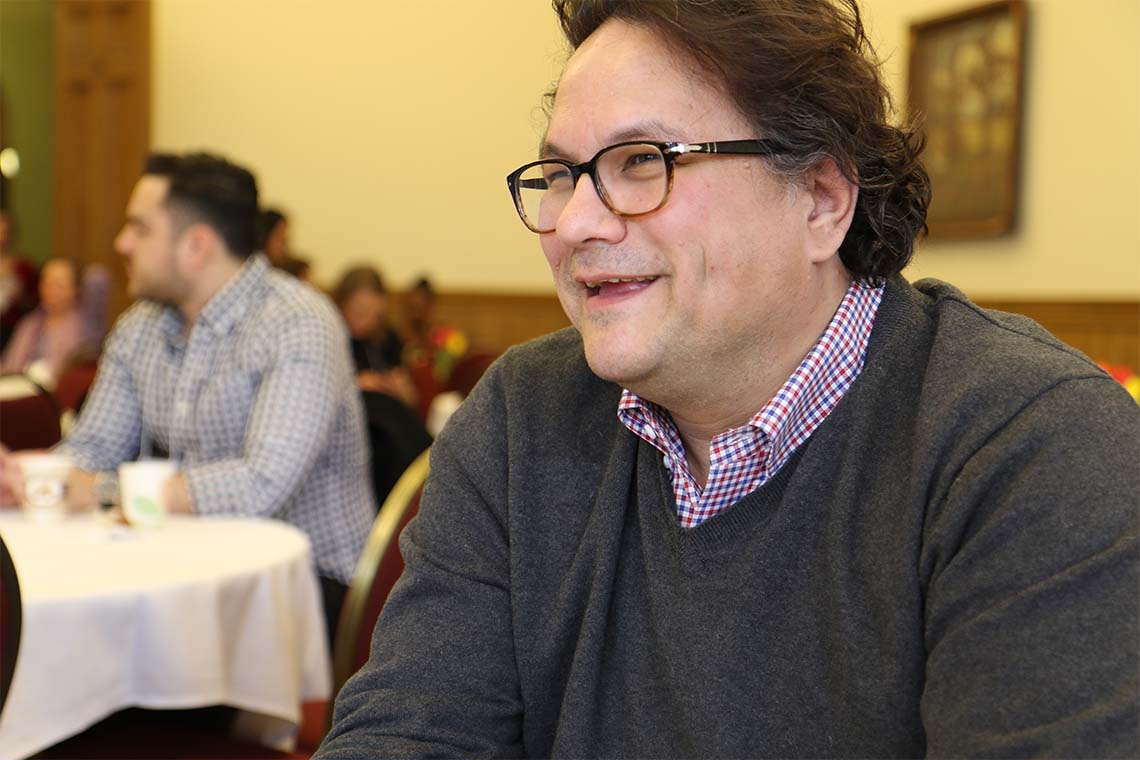 How to reconcile with Indigenous peoples was the central theme of a conference at U of T last week. It was a day filled with heartbreaking stories, laughter and talk about the role universities play in reconciliation.

The Campus (Re)conciliations: First Listenings conference was hosted by Victoria University in the University of Toronto and is part of Ideas For The World – a series of programming to encourage social interaction, academic reflection and community awareness at U of T.

The conference brought together students, faculty, staff and special speakers to talk about what truth and reconciliation means, and how universities can respond to the 94 calls to action laid out in the federal Truth & Reconciliation Commission's (TRC) report.

“We got to the reconciliation process specifically through residential schools, but that’s just a part of what being Indigenous in Canada has been under colonialism,” said Jesse Wente, director of film programmes at TIFF Bell Lightbox.

Wente, a U of T alumnus, delivered a keynote address that explored issues around Canada 150 and its relationship to TRC. Lisa Boivin (left), a graduate student in the Faculty of Medicine and Kelley Castle (right), dean of students at Victoria University at the conference (photo by Hannah James)

“I decided it was important to have an open discussion around TRC and university responses,” said Kelley Castle, dean of students at Victoria. Castle said she came up with the idea for the conference in response to students asking about how they can get involved in the process of conciliation. She co-chaired the event with Jonathan Hamilton-Diabo, director of First Nations House at U of T. U of T alum and painter Mike Ormsby (left) and elder Ernie Sandy (right), who sits in U of T's Elders Circle at Jesse Wente's talk (photo by Hannah James)

“I see real value in the contributions of all the speakers, each of whom has first-hand experience with the legacy of what Senator Murray Sinclair has called ‘cultural genocide’ in Canada,” Duncan said. “Students in my seminar – all of us who attended – now attach real faces and stories to the work we are doing to understand and contribute to the calls for action.”

The conference also included speakers like Bonnie Jane Maracle, Aboriginal learning strategist, and Elder Andrew Wesley of First Nations House. There was also a pop-up book shop by GoodMinds, an educational book seller from Six Nations of the Grand River. U of T Professor John Duncan co-founded Ideas For The World with Kelley Castle (photo by Hannah James).

A powerful opening keynote speech by Kevin Lamoureux, associate vice-president of Indigenous affairs at the University of Winnipeg left the audience speechless.

“You could hear a pin drop,” said Castle. “He brought so much weight and respect to some very important, extremely challenging, emotionally difficult conversations while still managing to make his audience smile,” she said. Essential reading: First Nations, Metis and Inuit books by GoodMinds, an Indigenous book shop based on the Six Nations of the Grand River (photo by Hannah James)

James Bird, an undergraduate student in architecture at University College – and a residential school survivor – chaired a panel called “Student Journeys and Reflections.”

Sloat, who is working on a master's degree in anthropology, spoke about being of mixed settler and Indigenous heritage and also the first member of her family to attend university. Sloat said her academic journey included questioning her identity and also her role in representing her community and family.

“My hope for this institution moving forward is that there are more open spaces where we can have these conversations and these dialogues,” said Sloat. Lisa Boivin, a graduate student in the Faculty of Medicine, in front of her painting, Hawk Medicine (photo by Hannah James)

Boivin, a Dene woman, visual artist and graduate student in the Rehabilitation Sciences Institute in the Faculty of Medicine spoke about her journey and the role painting has played in her academic work.

She shared some of her paintings which explore themes of health, medicine and story through striking, colourful imagery and symbols such as strawberries, caribou horns, footprints and cellphones.

Boivin’s painting, The Transition of Little Wolf is featured on the cover of Answering the Call Wecheehetowin, the final report of the U of T's TRC steering committee. James Bird, a U of T architecture student, chats with Emily Gilbert, a conference organizer at the reception (photo by Hannah James)

“Jesse Wente is a leading critic of the arts and culture in Canada, and as Kevin Lamoureux made so plain, the history we are learning about through this process needs excellent cultural criticism, as well as new artistic vision. We were lucky to have these two wonderful keynote speakers, as well as artists and other creators speak to us today,” Duncan said.

Christina Jeon, a psychology specialist and Victoria College student, is pursuing a minor in Indigenous studies. She said she wanted to learn more about 'conciliation versus reconciliation' and what it means, and for whom, she said. U of T student, Christina Jeon, is doing a minor in Indigenous studies and came to the conference to learn more about TRC (photo by Hannah James)

“It doesn’t matter how you look at it, there’s a lot of discomfort you have to face in terms of how we contribute to colonization and the continued discrimination and marginalization of Indigenous people,” said Jeon. "The fact that it brings us discomfort is proof that it’s something that’s wrong.”

Castle says there will be a second listening event some time next year, to keep the conversation going.