U of T researcher helps build a more egalitarian internet 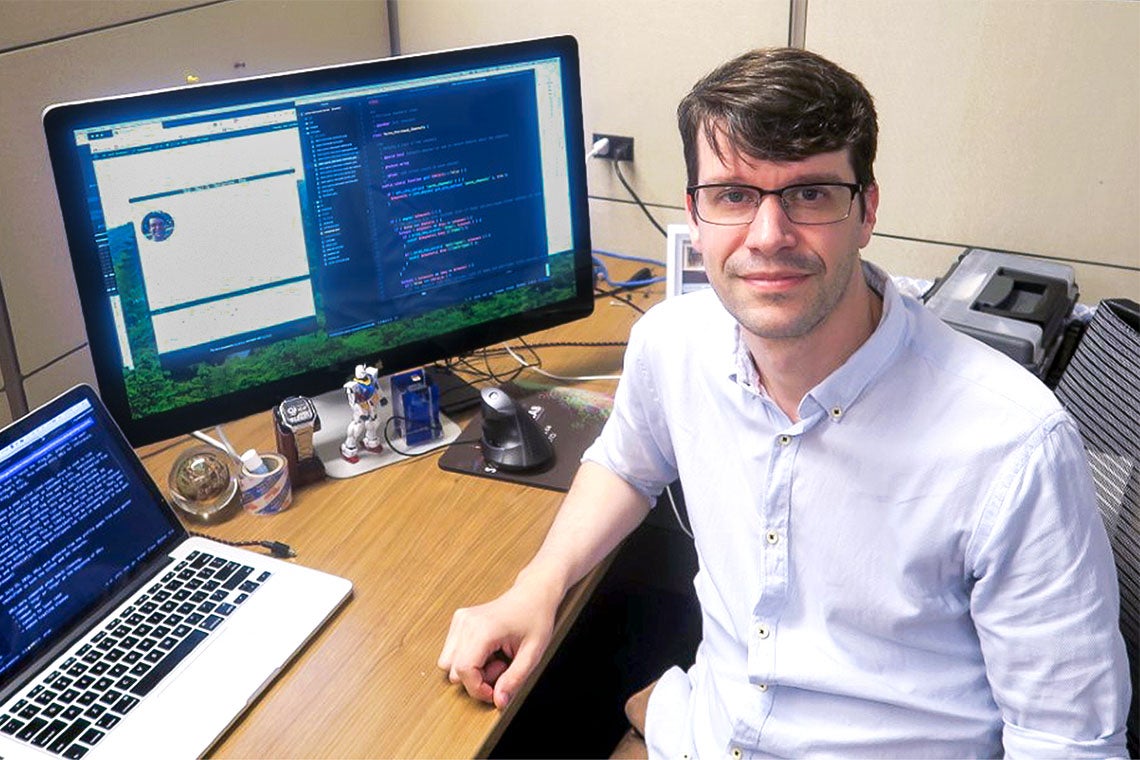 The internet was supposed to be a democratic place, but it instead evolved to be controlled by a handful of powerful corporations – something U of T PhD candidate Jack Jamieson wants to help change (photo by Rekha Morbia)

Jack Jamieson wants to help build a better, more egalitarian internet – in effect, helping to realize the vision of the technology’s early pioneers.

The PhD candidate in the KMDI-Semaphore research institute at the University of Toronto’s Faculty of Information works alongside a community of software developers and enthusiasts who are building the IndieWeb, a community of individual websites connected together as an alternative to corporate platforms.

“I’ve been building websites for over two decades and became frustrated that the web has become so dominated by large corporate platforms,” Jamieson says. “In return for easy-to-use social media, online experience is increasingly characterized by targeted advertising, and individuals’ choices are limited by platform algorithms.

“My research examines efforts to ‘re-decentralize’ the web – what does this work involve and how can designers and researchers pursue a future internet that is egalitarian, accessible, and not exploitative?”

Much of the optimism about the early web was the potential for individuals to have their own websites. Hence, the IndieWeb proposes a return to personal websites and has built tools to enhance these sites with the best features of social media without surrendering ownership or control to corporate platforms.

By setting up a personal website with some basic IndieWeb technologies, people can communicate directly with one another with no platform in between, sending replies, liking posts and other social media actions.

“There are a lot of different projects attempting to build new, decentralized systems for the internet,” Jamieson says. “What drew me to IndieWeb specifically is its commitment to building upon the existing web rather than inventing completely new systems. Building upon the existing web allows more accessibility for developers and web hobbyists to contribute since they can build small modules to fit their own needs.”

Working with supervisor Rhonda McEwen, an associate professor in the Faculty of Information and U of T Mississauga’s Institute of Communication, Culture, Information and Technology, Jamieson’s research focuses the IndieWeb community’s efforts to put human values at the forefront of design. He says the group has much to teach about building technologies that articulate positive social values related to individual autonomy, inclusiveness, and community.

IndieWeb’s approach is supported by recent scholarship and media coverage that has highlighted the political and ethical issues posed by big tech since the decisions made by social media designers can affect millions or billions of users.

“Sometimes decisions that work for one group cause problems for another,” Jamieson notes. “Design ideas that make sense in Silicon Valley don’t translate everywhere – sometimes with serious consequences.”

On a technical level, IndieWeb is composed of many small parts that allow individuals to build what works for them. Users can then figure out how to interoperate with others who favour a different approach – a strategy that builds inclusivity since there is no attempt to impose a one-size-fits-all solution.

To take one example: Jamieson has used IndieWeb’s building blocks to write software to control one's own social timelines, or the feed of posts from people they follow. That’s unlike most social media platforms, which use sophisticated algorithms to promote content the software deems most engaging.

“Unfortunately, hate speech, misinformation or simply types of content we don’t want to see are often considered ‘engaging’ by these algorithms,” Jamieson says.

Another benefit, according to Jamieson: “My software runs a social timeline on one’s own server, so there’s no company tracking who you are following, inserting ads or otherwise making decisions about what you read.”

One of the key takeaways from the project is the importance of IndieWeb’s community.

“For a movement that emphasizes individual autonomy, IndieWeb’s events and community support networks are the driving force behind its longevity,” Jamieson says.

“This is significant for building a system that is well-maintained since social networking systems require constant adaptation to accommodate new users, changing practices and to remain compatible with ever-changing third parties.”