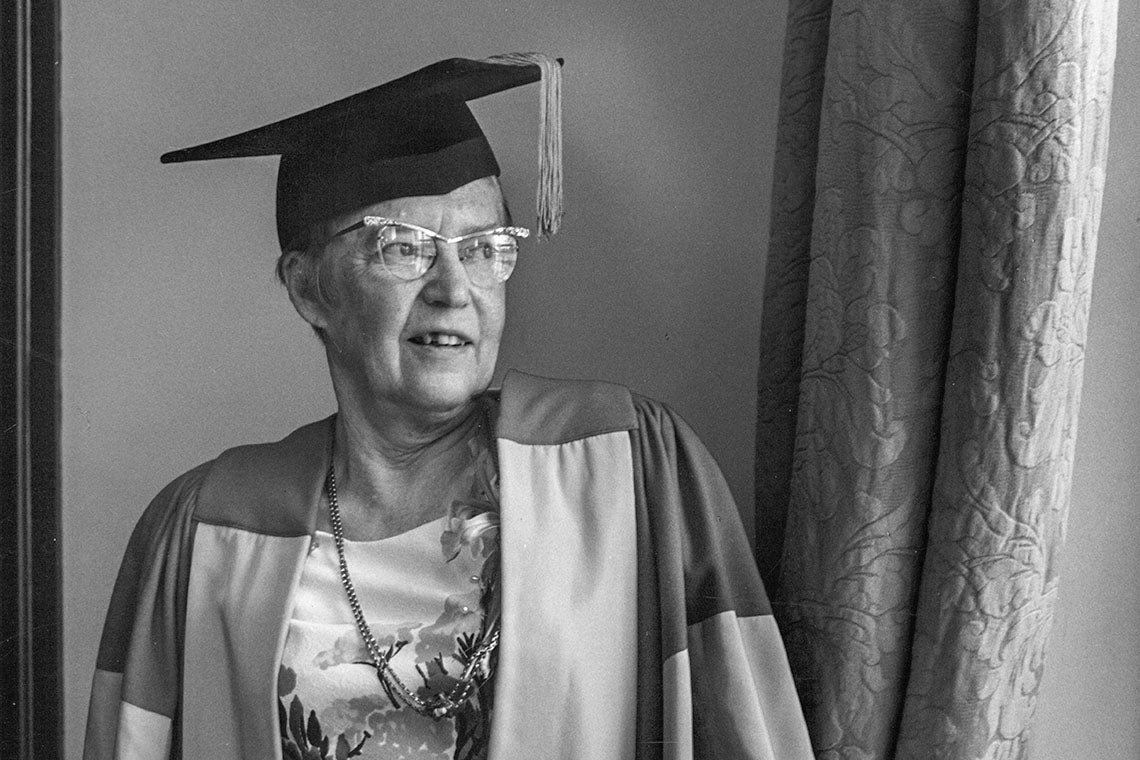 Graduating from U of T in 1927, Elsie MacGill went on to become an aeronautical engineer during the Second World War, earning the nickname “Queen of the Hurricanes” (photo courtesy of University of Toronto Archives)

The University of Toronto has marked a number of convocation firsts – from educating the first Canadian-born Black family physician in Canada to granting the country’s first Bachelor of Science degree to a woman.

With spring convocation kicking off this week, U of T News photo/video coordinator David Lee and archivist Marnee Gamble dug up several historical photos of history-making members of the U of T community that, in some cases, date back more than a century. In 1903, Emma Baker, left, and Clara Benson became the first women to earn a PhD from the university – earning degrees in philosophy and chemistry, respectively. They each eventually taught in the Faculty of Household Science. Benson, specifically, rose to the position of lecturer and, when the school was designated as a full-fledged faculty in 1906, became the university’s first of two associate professors. Graduating from U of T in 1927, Elsie MacGill was the first Canadian woman to earn a degree in electrical engineering. She went on to become an aeronautical engineer during the Second World War, earning the nickname “Queen of the Hurricanes” for her work in turning a railway boxcar factory in northern Ontario into an aircraft assembly line. MacGill is pictured here prior to receiving an honorary degree from U of T in 1973. A participant in the American Civil War, Anderson Ruffin Abbott was the first Black Canadian – who was also born in Canada –  to be licensed as a family physician. He attended primary medical classes at U of T in 1867 and was admitted to the College of Physicians and Surgeons of Ontario in 1871. It’s believed that Nellie Greenwood became the first woman in Canada to receive a Bachelor of Science degree from a Canadian post-secondary institution when she received her undergraduate degree from Victoria University in 1884 – an experience she described as “a realm of pure delight,” according to historical documents. Oronhyatekha, which means “Burning Sky” or “Burning Cloud” in the Mohawk language, studied medicine at U of T, where he earned his MD in 1866 – the first Indigenous student from U of T to become a practising doctor and the second in Canada. In the years that followed, Oronhyatekha served as a solider, the president of the Grand Council of Canadian Chiefs and practised medicine throughout southwestern Ontario and western New York. Ann Augusta Stowe-Gullen was the first woman to graduate from a Canadian medical school. Born in Mt. Pleasant, Ont., Stowe-Gullen was educated at the Toronto School of Medicine, and then at the Faculty of Medicine at Victoria University. She became an MD in 1883. Frederick Scott became the first U of T student to receive a PhD degree in 1899 after the degree program itself was introduced two years earlier. His physiology thesis topic was focused on nerve cells. U of T awarded its first honorary degree to Henry Holmes Croft – a Doctor of Civil Law – in 1850. Croft was an author and professor of chemistry who served as U of T’s vice-chancellor from 1850 to 1853. Arlington Franklin Dungy was Ontario’s first Black dental school graduate. Originally from Windsor, Ont., Dungy earned his Doctor of Dental Surgery from U of T’s Faculty of Dentistry in 1956. Just over 10 years later, in 1969, he was named chief of pediatric dentistry at Toronto’s Hospital for Sick Children.