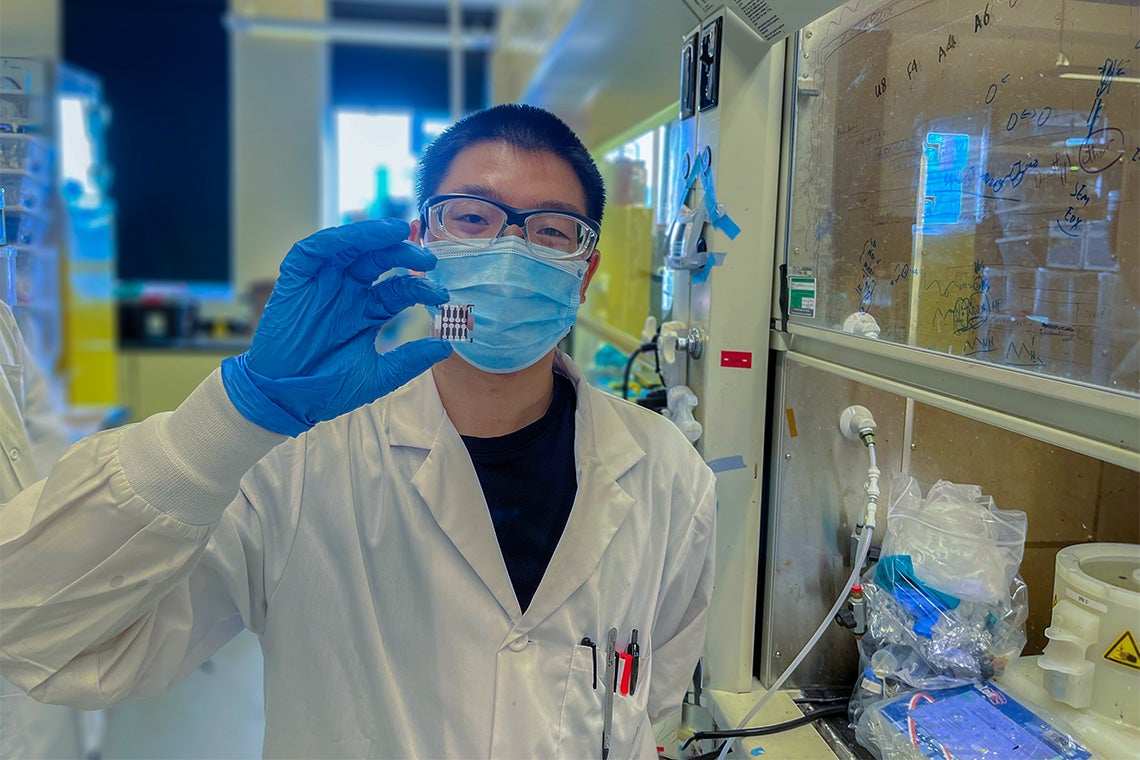 Post-doctoral researcher Hao Chen shows off a prototype inverted perovskite solar cell. The team leveraged quantum mechanics to improve both the stability and efficiency of this alternative solar technology (photo by Bin Chen)

A team of researchers from the University of Toronto’s Faculty of Applied Science & Engineering has leveraged quantum mechanics to optimize the active layer within a device known as an inverted perovskite solar cell – a technology that could one day result in mass-market solar cells that a fraction of those currently on the market.

At present, virtually all commercial solar cells are made from high-purity silicon, which takes significant energy to produce. But researchers around the world are experimenting with alternative solar technologies that could be manufactured and installed with less energy and at lower cost.

One of these alternatives, which is being studied in the Sargent Group lab, is known as perovskite. The power of perovskite materials comes from their unique crystal structure, which enables them to absorb light in a very thin layer and convert it into electricity efficiently.

“Perovskite crystals are made from a liquid ink and coated onto surfaces using technology that is already well-established in industry such as roll-to-roll printing,” says Hao Chen, a post-doctoral researcher in Sargent’s lab and one of four co-lead authors of a new paper published in Nature Photonics.

Chen, along with his co-lead authors – PhD candidate Sam Teale and post-doctoral researchers Bin Chen and Yi Hou – are using a strategy based on an inverted solar cell structure.

Reversing this arrangement enables the use of alternate manufacturing techniques and past research has shown that these can improve the stability of the perovskite layer. But the change comes at a cost in terms of performance.

“It’s hard to get good contact between the perovskite layer and the top electrode,” says Chen. “To solve this, researchers typically insert a passivation layer made of organic molecules. That works really well in the traditional orientation, because ‘holes’ can go right through this passivation layer. But electrons are blocked by this layer, so when you invert the cell it becomes a big problem.”

The team overcame this limitation by taking advantage of quantum mechanics – the physical principle that states the behaviour of materials at very small length scales is different from what is observed at larger ones.

“In our prototype solar cells, the perovskites are confined to an extremely thin layer – only one to three crystals in height,” says Teale. “This two-dimensional shape enables us to access properties associated with quantum mechanics. We can control, for example, what wavelengths of light the perovskites absorb, or how electrons move within the layer.”

The team first used a chemical technique established by other groups to produce a two-dimensional perovskite surface atop their solar cell. This enabled the perovskite layer to achieve passivation on its own, eliminating the need for the organic layer altogether.

To overcome the electron blocking effect, the team increased the thickness of the perovskite layer from one crystal in height to three. Computer simulations had shown that this change would alter the energy landscape sufficiently to enable electrons to escape into an external circuit, a prediction that was borne out in the lab.

The power conversion efficiency of the team’s cells was measured at 23.9 per cent, a level that did not fade after 1,000 hours of operation at room temperature. Even when subjected to an industry-standard accelerated ageing process at temperatures up to 65 C, the performance only decreased by eight per cent after more than 500 hours of use.

Future work will focus on further increasing the stability of the cells, including under even higher temperatures. The team would also like to build cells with a larger surface area, as the current cells are only about five square millimetres in size.

Still, the current results bode well for the future of this alternative solar technology.

“In our paper, we compare our prototypes to both traditional and inverted perovskite solar cells that have been recently published in the scientific literature,” says Teale.

“The combination of high stability and high efficiency we achieved really stands out. We should also keep in mind that perovskite technology is only a couple of decades old, whereas silicon has been worked on for 70 years. There are a lot of improvements still to come.”