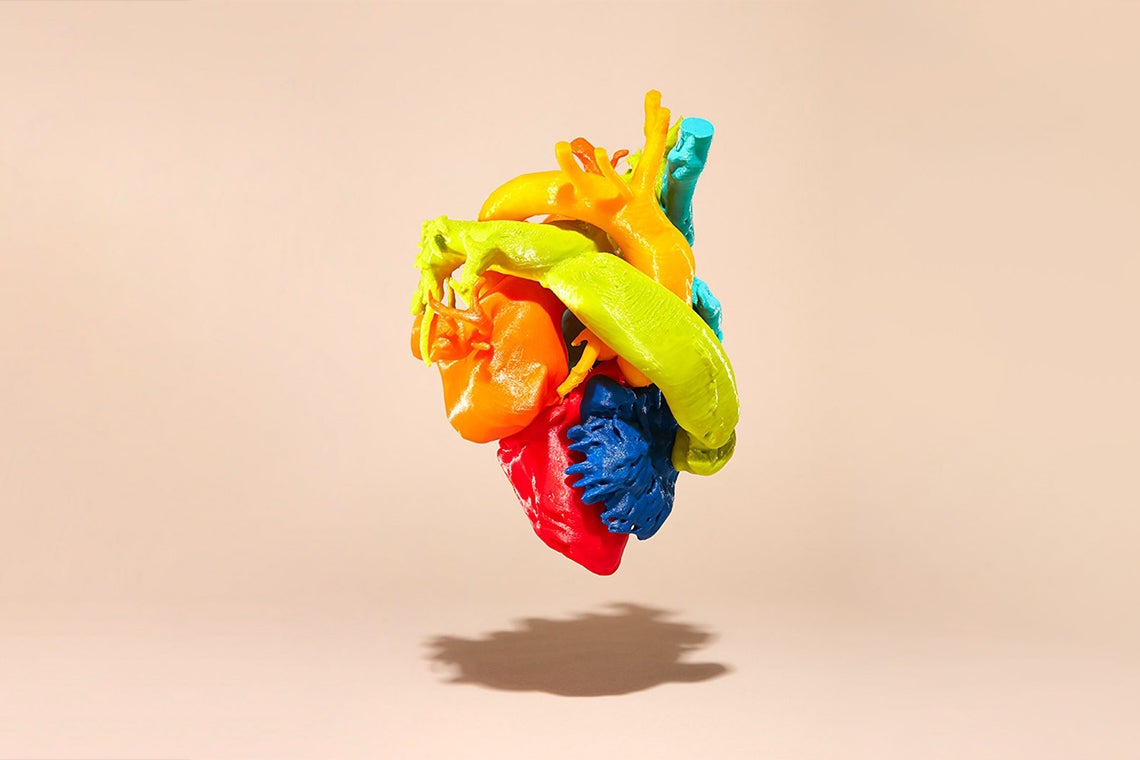 A 3D printed model of a heart (photos by Hamin Lee)

In a small, windowless room at Toronto General Hospital, a bank of seven 3D printers runs day and night, patiently laying down layer after layer of coloured plastic. When the printing is done, the pieces are trimmed and fitted together into perfect models of human hearts, life-sized and correct down to the smallest detail.
The 3D printers are part of the Lynn & Arnold Irwin Advanced Perioperative Imaging Lab at the University Health Network’s Peter Munk Cardiac Centre. Combined with advances in medical imaging and computer modelling, they are allowing doctors to get a better look at heart defects before they go in to repair them, as well as providing better training methods.
The models of the hearts use extremely detailed data from MRIs, CT scans, ultrasounds or other imaging techniques. Normally, doctors are working with two-dimensional images on a printout or a flat screen. As anyone who has ever tried to see their baby on a prenatal ultrasound can appreciate, this isn’t always easy. By turning the data from those images into three-dimensional computer models, and using those models to make solid printed hearts, the lab gives the doctor something that can be held in the hand and examined in detail. 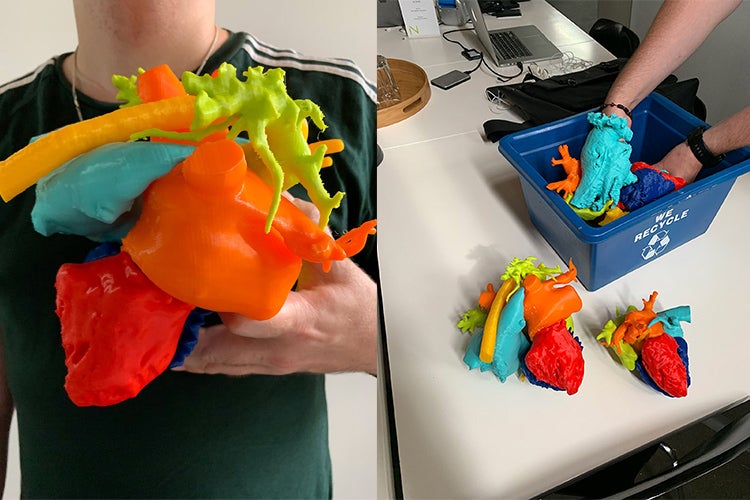 With the printers whirring away in the background, Josh Qua Hiansen, the biomedical industrial designer at the lab, shows how the model will be used by doctors. This particular patient has a malformation of a part of the heart called the superior vena cava, which is allowing blood to mix with blood from pulmonary veins. Doctors want to fit an implant to close the malformed area, and they will use the model to make sure the implant is sized and positioned appropriately to close the area.
The lab was created in collaboration with Matt Ratto, a University of Toronto associate professor in the Faculty of Information and the head of the university’s Critical Making Lab. Co-founders are Dr. Massimiliano Meineri, a U of T professor of anesthesia, and Dr. Azad Mashari, an anesthesiologist at Toronto General Hospital and a U of T lecturer who heads the imaging lab. The mandate is to evaluate, refine and translate 3D imaging, modelling and micromanufacturing techniques into clinical and educational practice.
Mashari says that the new techniques provide an inexpensive and flexible way to create all sorts of learning aids. These include medical “phantoms” – printed hearts, spines and other body parts. For instance, heart phantoms are used to train ultrasound technicians. And a phantom spine in flesh-like gel can be used to instruct on how to give spinal injections.
With the capability provided by in-house 3D printing, along with 3D computer models and even virtual reality, Mashari thinks that training and medical visualization will continue to become less expensive and more effective. 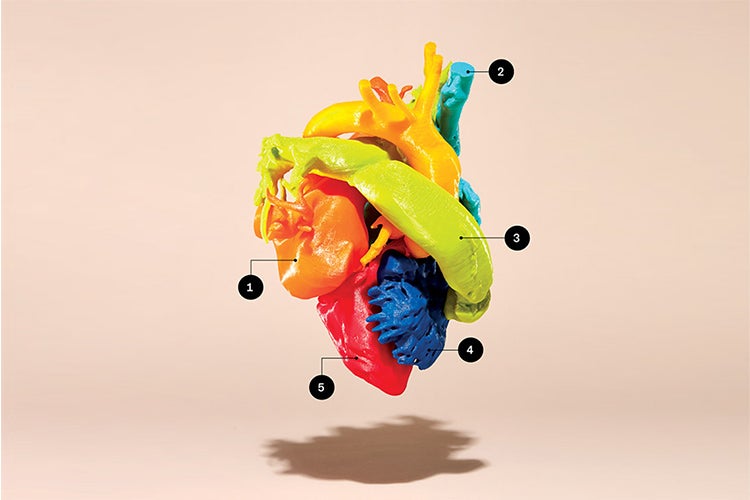 Close-up picture of a model of a human heart created with a 3D printer, with numbers 1-5 associated with various parts of the model

The 3D printed model of the heart above is taken from the scan of a patient with dextrocardia and transposition of the great arteries. The patient has had many surgeries in order to create a normal circulation.
This picture shows the top of the heart, so it is as if you were looking down at it from above the person’s head.
The model shows the spaces inside – as if the walls of the chambers, arteries and veins had been removed, and only the blood they contain was visible. This allows doctors to get a good look at the connections between the chambers of the heart.
To make the heart, images from CT scans were converted into 3D computer models, and then rendered into thousands of “slices.” The printer used these image slices to build up the pieces one layer at a time.
The models are fairly cheap to make, but they do take time. It took a technician about three hours to convert the CT scan for this one into a computer model. Total printer time was 30 to 40 hours.

This story first appeared in the University of Toronto Magazine. Read the most recent issue