President Meric Gertler, other U of T leaders express solidarity with Asian community after Atlanta shootings 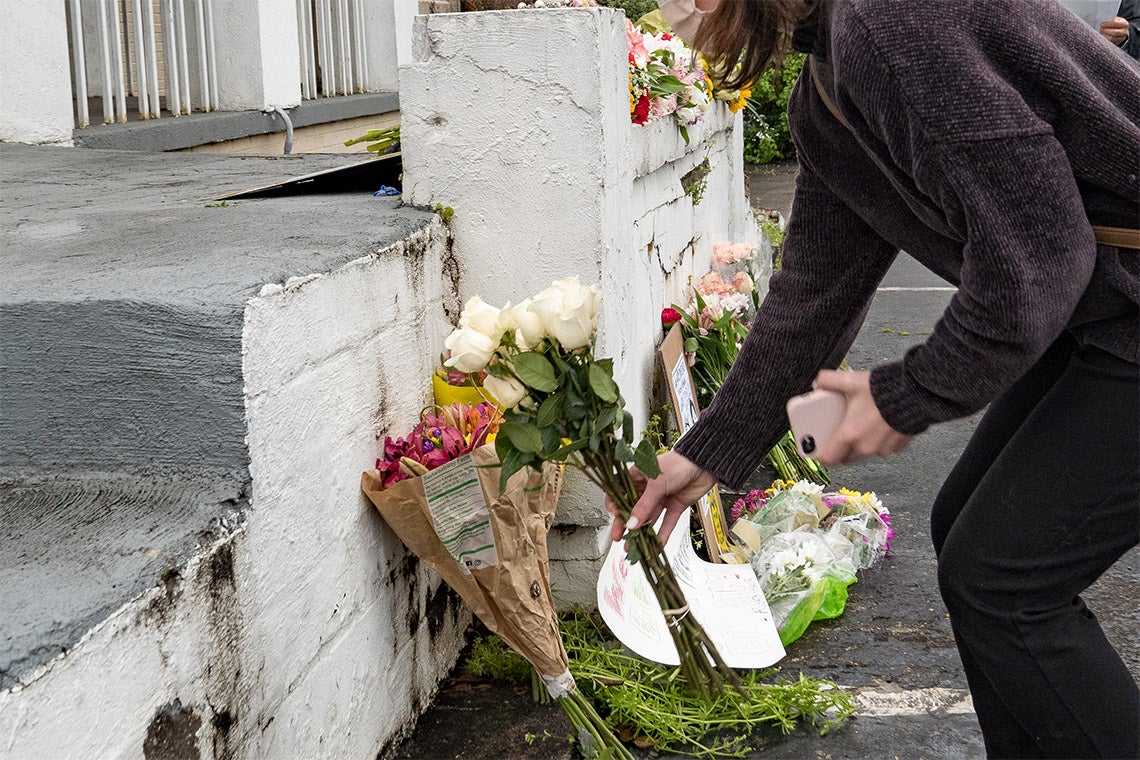 Mourners leave flowers at one of three spas in the Atlanta area that were targeted by a gunman who killed eight people, including six women of Asian descent (photo by Megan Varner via Getty Images)

President Meric Gertler and other University of Toronto leaders are condemning anti-Asian racism and violence against women following mass shootings in Atlanta that killed six women of Asian descent.

“To all members of the diverse Asian communities on our three campuses, please know that we stand in solidarity with you at this very difficult time.”

Eight people were killed Tuesday in a series of shootings at three Atlanta-area massage businesses. Six of the victims were women of Asian descent. The suspect, who has been arrested, is a 21-year-old white man. Public officials, including Atlanta’s mayor, have called the shootings a hate crime.

The slaying came as anti-Asian racism has intensified in North America amid the pandemic. Asian Canadians and Asian Americans have reported a growing number of racist incidents, including several violent attacks against elderly Asians.

“It is particularly heartbreaking to hear, as we have done since the pandemic first emerged, that people in the Toronto region and many members of our own University community have been targeted in unconscionable acts of racism,” President Gertler said.

Joseph Wong, U of T’s interim vice-president, international, says the Atlanta tragedy is a manifestation of an anti-Asian sentiment that has been percolating for a long time.

“It gives us a moment to think about the history of anti-Asian racism within our own society,” Wong said. “It’s not something that’s just popped up in the last year or so, but rather something that’s been historically present here in Canada – and it’s important to recognize that.”

Wong added that U of T is dedicated in both word and deed to celebrating the diversity of all its students.

“All students should feel safe,” he said. “They should feel included as part of the U of T community, and they should feel entirely comfortable and empowered to reach out at any time that they feel like they have been a victim of harassment; to call out microaggressions; to seek the help they need if they are feeling anxiety around this wave of anti-Asian racism.”

The rise in anti-Asian racism comes at a time when U of T has intensified efforts to stamp out racism in all its forms and create a diverse, welcoming environment where everyone feels they belong and can fully participate – all in pursuit of a fully inclusive intellectual environment where all can thrive and achieve excellence.

Statements from U of T leaders across the three campuses echoed the acknowledgment that the attacks were part of a spate of violent acts against women and individuals of Asian descent. They also reiterated U of T’s commitment to fostering an inclusive and safe community for all racialized groups.

Alexandra Gillespie, vice-president and principal of U of T Mississauga, said the attack “represents only the most recent example of violence against people of Asian ethnicity across North America and around the world.”

“I know that people are hurting, both from news of the Atlanta murders and from a centuries-long history of anti-Asian violence, exacerbated in the past year,” Gillespie said in a letter to the U of T Mississauga community.

Gillespie called on non-Asians to join in the shared battle against anti-Asian racism: “Our sympathy must lead to change.”

Similarly, Wisdom Tettey, vice-president and principal of U of T Scarborough, expressed solidarity with U of T’s Asian community members.

“As a campus community, we pride ourselves on our inclusive culture, and we denounce these acts and stand firmly with our Asian community,” Tettey said in a statement.

“The week’s tragic incidents also reveal, yet again, the dangers that women, in general, and racialized and Indigenous women, in particular, face every day as they go about their daily routines.”

Kelly Hannah-Moffat, U of T’s vice-president, human resources and equity, thanked students, faculty, librarians and staff who are already working on issues of anti-racism, xenophobia and misogyny. She also said her office, along with U of T’s Anti-Racism and Cultural Diversity Office, will announce important tri-campus initiatives and additional supports for the U of T community.

“This horrific act cannot be ignored, and our hearts go out to the families of the victims and all members of the Asian community. Violence and discrimination against any racialized group is unacceptable.” Hannah-Moffat said in a statement that noted fighting racism is a shared responsibility. “As a community, we must continue to work towards eliminating all forms of racism and sexism.

“Human rights, inclusion, and respect are fundamental values at the University of Toronto. The University has zero tolerance for hate, harassment, and discrimination.”

President Gertler noted the significant contributions of U of T’s Asian communities, both in Canada and around the world, and called for efforts to fight against all forms of racism and discrimination.

“We are proud of and grateful to U of T’s very substantial Asian communities, locally and globally,” President Gertler said.

“Let us remember that of course we still have work to do in combatting racism, and let us commit to calling out hate whenever we witness it, and redouble our efforts to combat discrimination and violence on every level.”

The following resources are available to students, staff, faculty and librarians in need of support:

For staff, librarians and faculty: