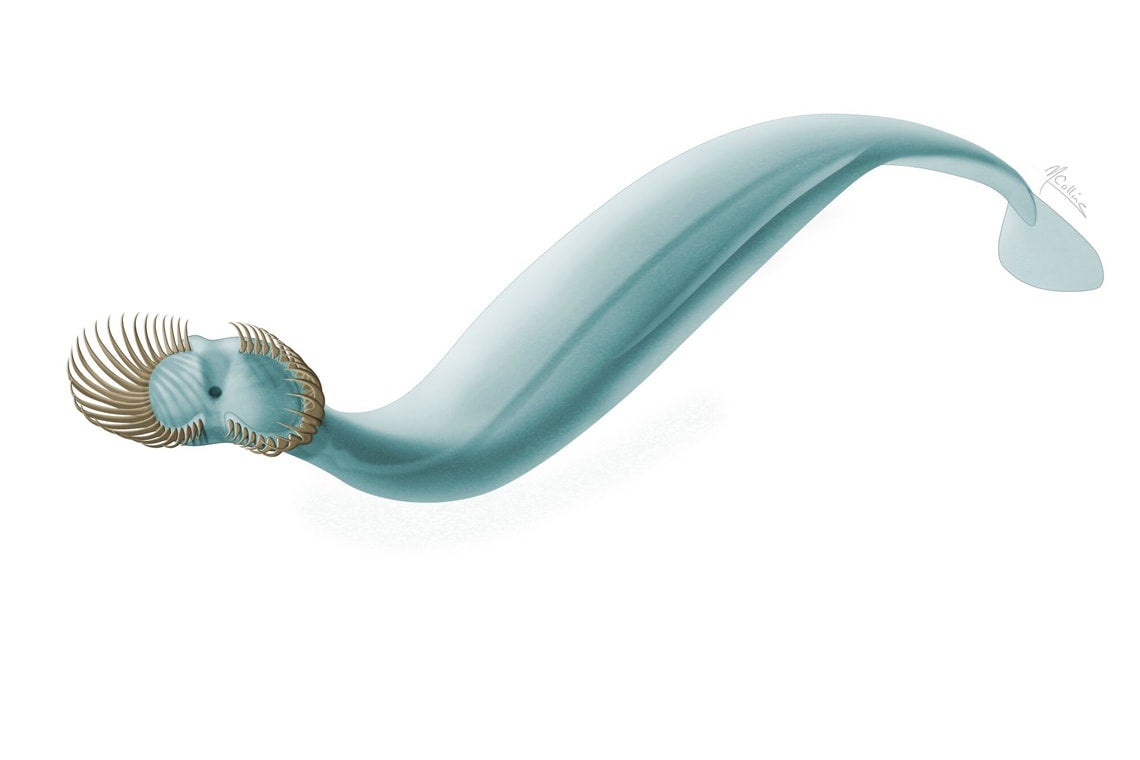 The “Capinatator praetermissus,” a primitive arrow worm, was identified from 508-million-year-old Burgess Shale fossils. Today these predatory marine worms are smaller and found in plankton (illustration by Marianne Collins/ROM)

A team of scientists has identified a small marine predator that once patrolled the ocean floor and grabbed its prey with 50 spines deployed from its head.

At more than 500 million-years-old, Capinatator is thought to be a forerunner of the smaller chaetognaths that are abundant in today’s oceans, where they make up a large portion of the world’s plankton and the ocean food chain. It is one of the largest chaetognaths known, according to a paper published today in Current Biology.

“This new species would have been an efficient predator and a terrifying sight to many of the smallest marine creatures that lived during that time,” said Jean-Bernard Caron, an associate professor in the departments of ecology & evolutionary biology and earth sciences at U of T's Faculty of Arts & Science.

He is also a senior curator of invertebrate palaeontology at the Royal Ontario Museum (ROM). Caron made the identification with Derek Briggs of Yale University, based on 50 specimens from the fossil-rich Burgess Shale in British Columbia.

“This is the most significant fossil discovery about the chaetognath group of animals to date,” said Briggs, a professor of geology and geophysics and a curator at the Yale Peabody Museum of Natural History. 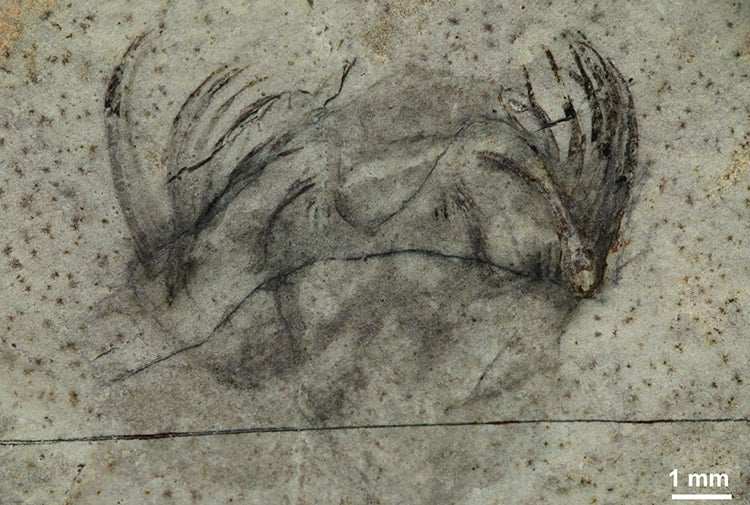 Of the specimens studied, many preserve the feeding apparatus attached to the head, with some showing evidence of the rest of the body. Forty-eight specimens are held by the ROM. This one is from the Collins Quarry at Mount Stephen in the Yoho National Park, B.C. (photo by Jean-Bernard Caron)

According to the researchers, Capinatator’s head configuration is unique. With about 25 spines in each side of its head, the species has nearly double the maximum number of spines found in today’s chaetognaths. This enabled Capinatator to capture prey by closing the two halves of its grasping spines toward each other as it swam.

Briggs and Caron also determined that while it is fairly common to find evidence of chaetognath spines, fossilized chaetognath bodies are extraordinarily rare. Many of the Capinatator specimens in this study included evidence of soft tissues.

“These Burgess Shale fossil specimens preserve evidence of features such as the gut and muscles, which normally decay away, as well as the more decay-resistant grasping spines,” said Briggs. “They show that chaetognath predators evolved during the explosion of marine diversity during the Cambrian period and were an important component of some of the earliest marine ecosystems.”

The species name praetermissus means “overlooked.” The name Capinatator is derived from capio, which means “to grasp” and natator, which means “swimmer.”

The material for this study, currently held in the ROM’s collections, was collected under research and collecting permits provided by Parks Canada. The Burgess Shale fossil sites are located within Yoho and Kootenay National Parks. Parks Canada protects the sites and works with leading scientific researchers to expand knowledge and understanding of this key period of earth history. The Burgess Shale was designated a UNESCO World Heritage Site in 1980.

Read other species identified from the Burgess Shale