Power lies in partnerships, president of Kosovo tells students during U of T visit 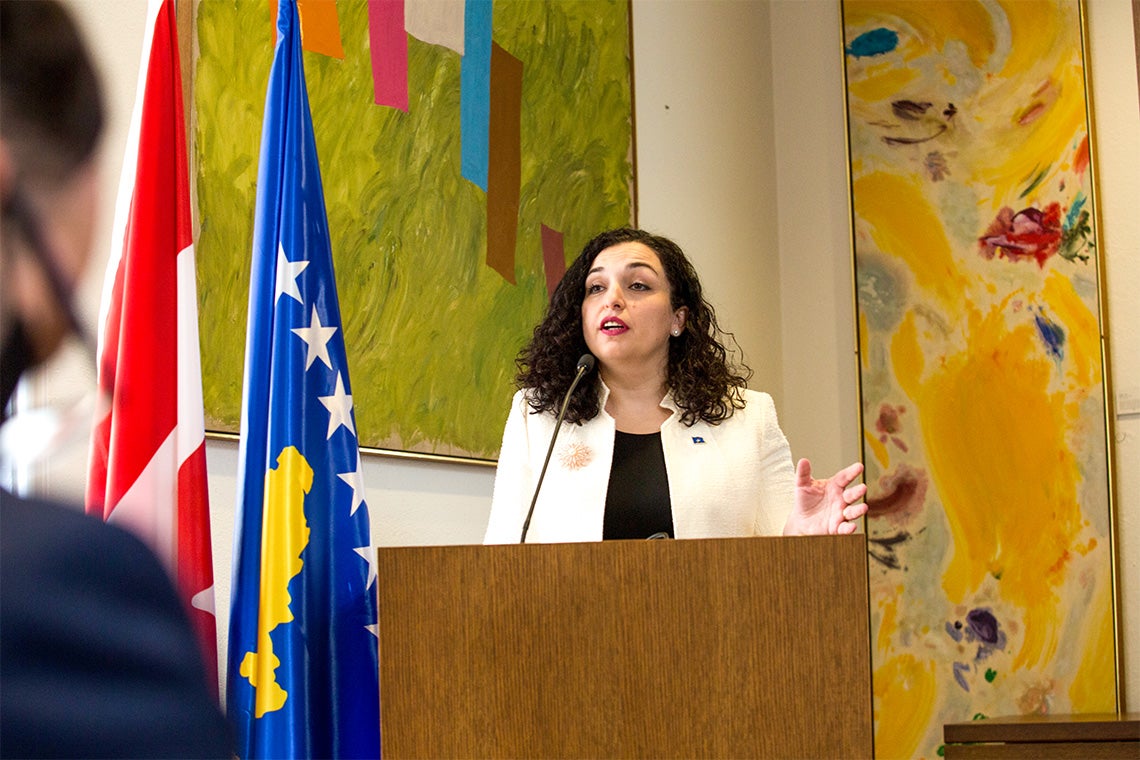 “There is power in partnerships. Our power truly lies in the friendships and the partnerships we create around the world. None of us will be successful [against the global challenges we face] unless we really work together.”

That was the message Kosovo’s President Vjosa Osmani shared at the University of Toronto’s Munk School of Global Affairs & Public Policy earlier this week.

“Countries, no matter how small they are, can have a big impact,” said Osmani, noting that after the fall of Kabul earlier this year, Kosovo was the first country in the world to offer to take in refugees. “We were refugees ourselves. We know what it feels like. We know what it is to have these doors open when you are forced to flee because no one really chooses to be a refugee, but anyone can become one.

“For us, the words ‘never forget’ have never been just a slogan; they have meant everything to us. So, if we get a chance to lend a helping hand to those in need to those who have been expelled from their homes, separated from their loved ones, forced to leave the house where they were born and raised – if there's one nation that will help no matter how small we are, that will be us, because today we’re alive. We are sovereign, independent and thriving.” 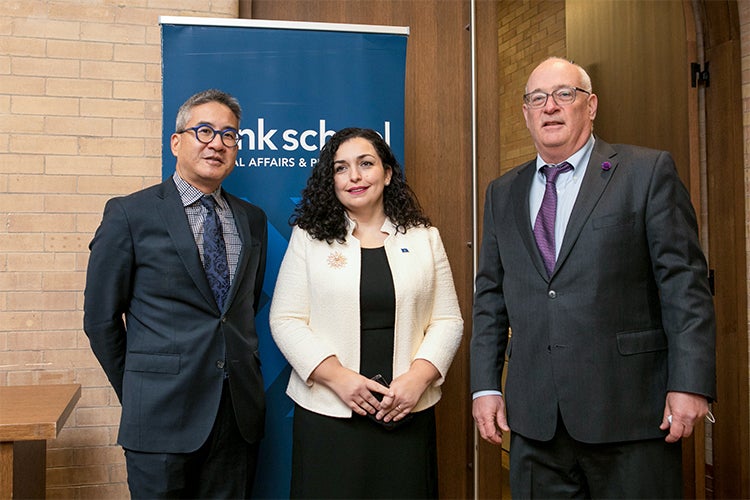 “President Osmani’s experience – especially during the 1999 war, her discussion of Kosovo’s support of refugees from Afghanistan, the need for European integration – really touched on subjects that are not just relevant for Kosovo, but for all of us,” said Austin, a professor and expert on the Balkans who teaches “Conflicts and Para-States in the EU’s Backyard,” a course that explores the regional disputes between Balkan countries as they bid to join the European Union.

“I first met Dr. Osmani in 2008 when I was in Kosovo for the independence declaration. I was travelling with 10 students from the University of Toronto for an international course module and it was just luck that we arrived the day before Kosovo declared its independence. I could tell then that she was a person of incredible integrity and so I was delighted when she became Kosovo’s president.”

Austin noted that Osmani is not the first Kosovar president to visit U of T. Kosovo’s founding father, Ibrahim Rugova, visited the Munk School in 2001. “It was an extremely important signal of Canada’s support for Kosovo that came well in advance of Kosovo’s independence in 2008,” Austin said. “The late President Rugova, who died in 2006, remains an iconic figure in Kosovo. I met with his widow on Kosovo Independence Day in February 2008 in Prishtina and she said his visit to Toronto was his favorite.”

Osmani praised the support of Canada and Canadians.

“It is because we had friends by our side, friends like Canada, who opened its doors to 8,000 Kosovar refugees,” she said. “They were there for us, not just when the war was going on … We had friends like you, we had friends like Professor Austin, who were our voice when we had no voice. [They] made sure that the voice of the people of Kosovo was heard in every table in the parliaments around the world and that really opened doors for us. When you are heard and you have that chance to tell the truth about what's going on in your country and when you really cherish these friendships, then miracles can happen like they did in the Republic of Kosovo.”

Hearing Kosovo’s president speak about the country’s struggles and efforts to chart a new course brought to life to what students have been learning in the program, said Ashley Renz, a second-year master’s student at the Munk School’s Centre for European, Russian, and Eurasian Studies.

“In my studies, I’ve focused on sexual trauma survivors in Kosovo during and after the war. She has brought the issue into the foreground, working with local women’s and advocacy organizations, and emphasizing the role of women in shaping post-war policy. Her administration has brought major changes in terms of providing recognition of the trauma that so many women endured and in bringing the issue to light,” said Renz, noting that Kosovo now marks April 14 as a day of recognition for sexual trauma survivors. “Her passion is so evident. You can see how much she cares about the future of Kosovo.”

For Isabelle Avakumovic-Pointon, a student in the first year of her master’s degree in European and Russian affairs, the president’s words gave context to her family’s own lived experience.

“My family is from the Balkans,” she said. “The presence of history, the trauma of history, the complications of history are stories I’ve grown up with. It was fascinating to hear the president of Kosovo speak about those things and how they affect policy in the day-to-day. President Osmani recognized that Kosovo is facing significant challenges but believes that they can overcome them … That was very refreshing. To hear the president speak for herself and about her people was really powerful.”

“For me, the fact that our students – graduate and undergraduate – had an exclusive audience with Kosovo’s president was the best part of the day,” said Austin. “[The students] were extremely prepared and I could feel the emotion in the air. For them to be able to stand up in front of a president and ask tough questions – these are the opportunities that stay with them forever.”

“It was an unforgettable experience,” said Vorstman, a master’s candidate in European and Russian affairs. “It's one thing for me to be given the chance to study a topic that I am passionate about in graduate school, but yet another to have my own graduate program organize these kinds of once-in-a-lifetime opportunities that motivate me even more to deepen my knowledge and understanding of these parts of the world.”