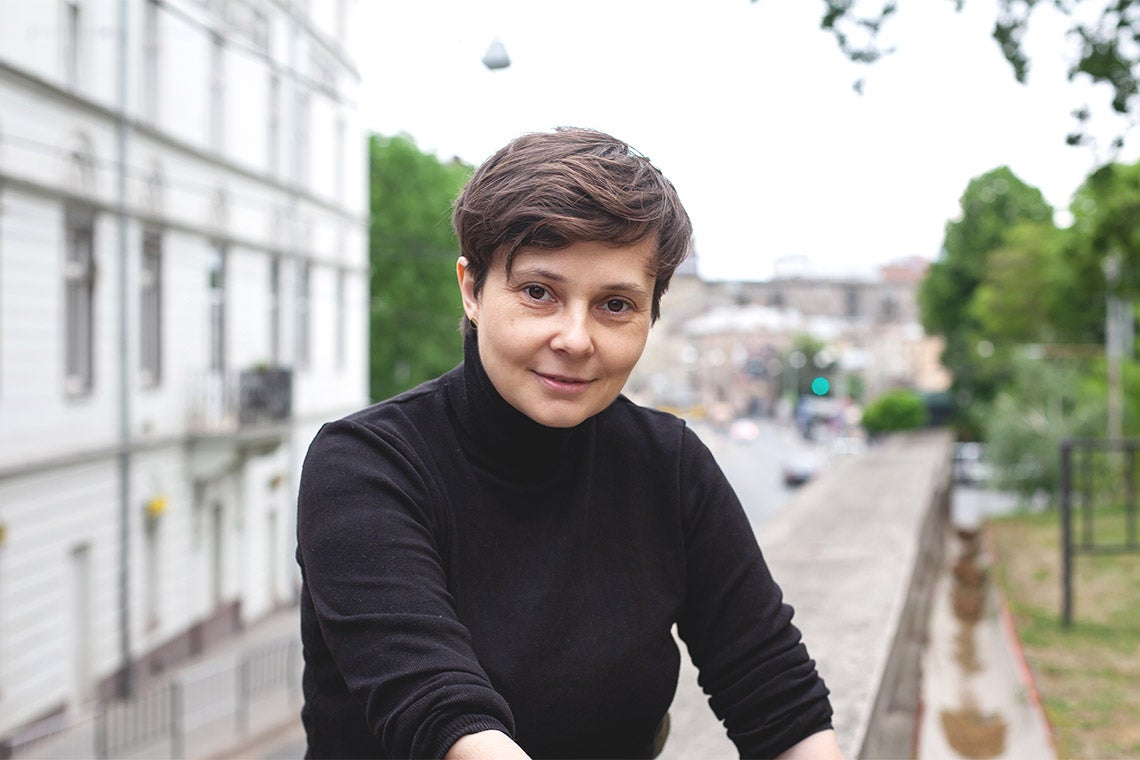 Oksana Dudko, PhD candidate in history, travelled to Ukraine when the war broke out to help source and transport medical kits to friends and relatives (photo by Odri Stakhiv)

By Feb. 24, signs of pending Russian aggression against Oksana Dudko’s home country of Ukraine had been visible for months.

Yet the University of Toronto graduate student says it was still a shock to open Facebook and Instagram and see her friends in Kyiv sharing the sounds of bombs falling around them.

“No one expected such a ruthless war was coming – that that would be the first day of a full-scale invasion where the whole country would be targeted,” says Dudko, a PhD candidate in the department of history who is cross-appointed to the Anne Tanenbaum Centre for Jewish Studies in the Faculty of Arts & Science.

“It’s a radical change from the Ukraine that I know.”

Many of Dudko’s friends are fighting on the front lines – specifically in Kharkiv, a city in eastern Ukraine next to the Russian border. Like much of the Ukrainian army, Dudko’s friends are not trained soldiers – they are scholars, artists and cultural workers who have volunteered to take up the fight. Some of their families are under constant shelling, hiding in basements. And, as war broke out, they were all in desperate need of medical supplies.

So Dudko, who specializes in modern Ukrainian history and 20th-century European history, left Canada for Warsaw and then onward to Lviv to help. She connected with colleagues abroad to source and transport medical kits to their friends and relatives, across the border to Lviv and throughout Ukraine. What began as an intimate effort evolved into a broader grassroots network of dedicated volunteers who delivered supplies – under rampant shelling – to civilians who were managing everything from chronic diseases to war wounds. 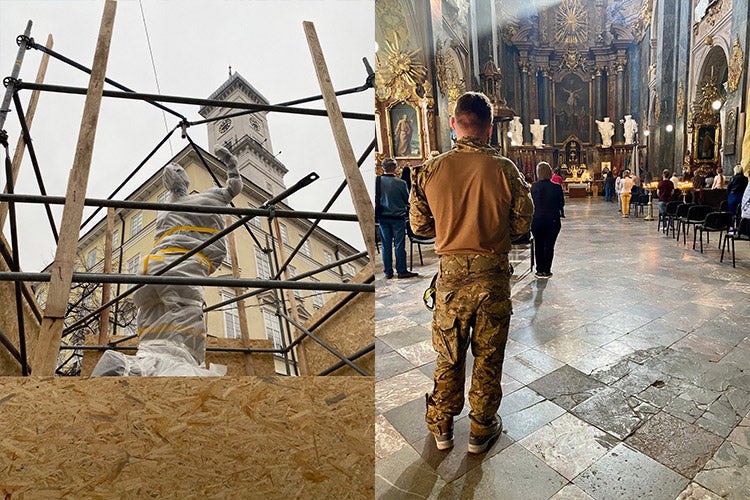 Left: A wrapped and reinforced Neptune fountain in Rynok Square. Across the country, Ukrainians wrapped monuments and statues to protect them from possible Russian shelling and bombardment. Lviv, May 16, 2022. Right: A Ukrainian soldier prays in St. Petro and Pavlo Garrison Church. In the background, wrapped church statues are visible. The church frequently serves as a venue for military funerals. Lviv, May 11, 2022. (photos by Oksana Dudko)

“Because Kharkiv is an active war zone, some large humanitarian convoys were not able to enter it,” says Dudko. “I’m a scholar and my colleagues are scholars who work at cultural centres like the Kharkiv Academic Puppet Theatre. We aren’t professional humanitarian volunteers. We just had this feeling that we must do anything we can to be actively involved – because it's our country, our city and our neighbourhood.”

It’s been more than six months since the war began and there’s now a more established network of humanitarian initiatives.

“Back then, we didn’t realize that the war was going to be so long,” says Dudko. “The media coverage has lessened, but war is still going on, more brutal than ever in eastern and southern Ukraine. We need to be optimistic and strong and keep helping Ukrainians in the face of what feels like a war of attrition.”

The war in Ukraine is not only deeply personal for Dudko. As a historian of the First World War and revolutions in Eastern Europe, she also understands how it is steeped in patterns of the past.

She left her home of Lviv in 2015 to pursue her PhD under the supervision of Piotr Wróbel, a professor in the department of history who holds the Konstanty Reynart Chair of Polish History. Also on her dissertation committee: University Professor Lynne Viola and Professor Doris Bergen, the Chancellor Rose and Ray Wolfe Professor of Holocaust Studies.

Dudko’s research and teaching bring her back to Ukraine often.

For many centuries, Dudko says, most of the Ukraine territories were under Russian imperial control and there were harsh policies of “Russification” – Ukrainian schools were closed and Ukrainian culture and language were forbidden. Similar restrictions continued under the Soviet Union: Ukrainians could express their ethnic identity but were not allowed any independent political life. 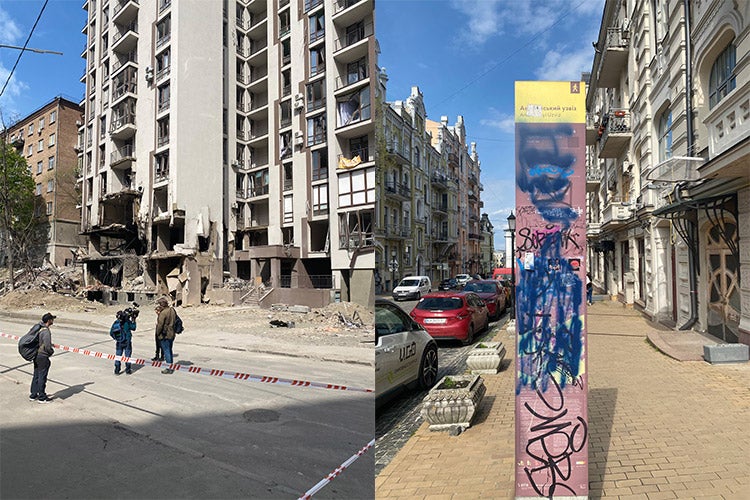 Left: A damaged residential building in Kyiv. One person died during the shelling of the area. Kyiv, May 1, 2022. Right: A tourist map of a Kyiv neighbourhood that has been painted over. Ukrainians painted over maps, road signs and street names to disorient Russian troops who invaded Ukraine. Kyiv, May 1, 2022. (photos by Oksana Dudko)

She also highlights the expansion of Russian culture across Ukraine as another method of imperial maintenance.

Ukrainians’ current efforts to protect their cultural heritage amid Russian shelling abound, with many historic monuments and street signs shrouded in protective tarps.

Saving the physical signs of Ukrainian identity are important, says Dudko, as more are lost to the war’s violence.

“We have already lost the museums that held works by local artist Maria Prymachenko and philosopher Hryhoriy Skovoroda. In the face of this destruction, many grassroots organizations such as Korydor – a magazine about contemporary culture – are performing important work to help keep independent Ukrainian culture alive.

“We can constantly see these Russian attempts to control Ukraine throughout history, and now we have this on a larger, different scale – as a full-fledged war,” Dudko says.

Prior to the invasion, Dudko taught students in Canada and Ukraine about the importance of demilitarization and diplomacy in the face of conflict – to fight for independent democracy by peaceful means.

“We can see that dialogue between countries with problematic histories is possible. There are many dark spots in Ukrainian-Polish relations. For example, Poles persecuted Ukrainians in Galicia, and later the far radical Organization of Ukrainian Nationalists participated in the massacre of Polish civilians in Volyn region during the Second World War,” Dudko explains. “Now, these countries have chosen democratic development and to work on overcoming historical traumas, so as not to repeat the same mistakes.”

But after witnessing the devastation of today’s war firsthand, with her friends and students among the many young people who have died, she says it’s difficult to reconcile that conviction.

“My generation argued for the importance of peace and demilitarization because we wanted to live in a peaceful country. Now we are in the position of having to protect it with weapons – it's a huge identity crisis,” says Dudko. “My friends who are in the army don't want to fight, don't want to kill, don’t want to die – but they don't want to live under Russian President Vladimir Putin’s regime either.

Dudko returned to Canada this summer and was joined soon after by her aunt and cousin. While she finishes her dissertation and teaches courses, she will continue to support Ukraine by collecting funds to help civilians in eastern Ukraine where much of the fighting is concentrated. She also plans to interview Ukrainian refugees and eventually create a digital archive of their experiences for the historical record.

For the rest of us who want to help, Dudko has one message: “Keep talking about Ukraine. Keep the conversation alive. Give Ukrainians your focus because it's a long war – and global solidarity matters.”