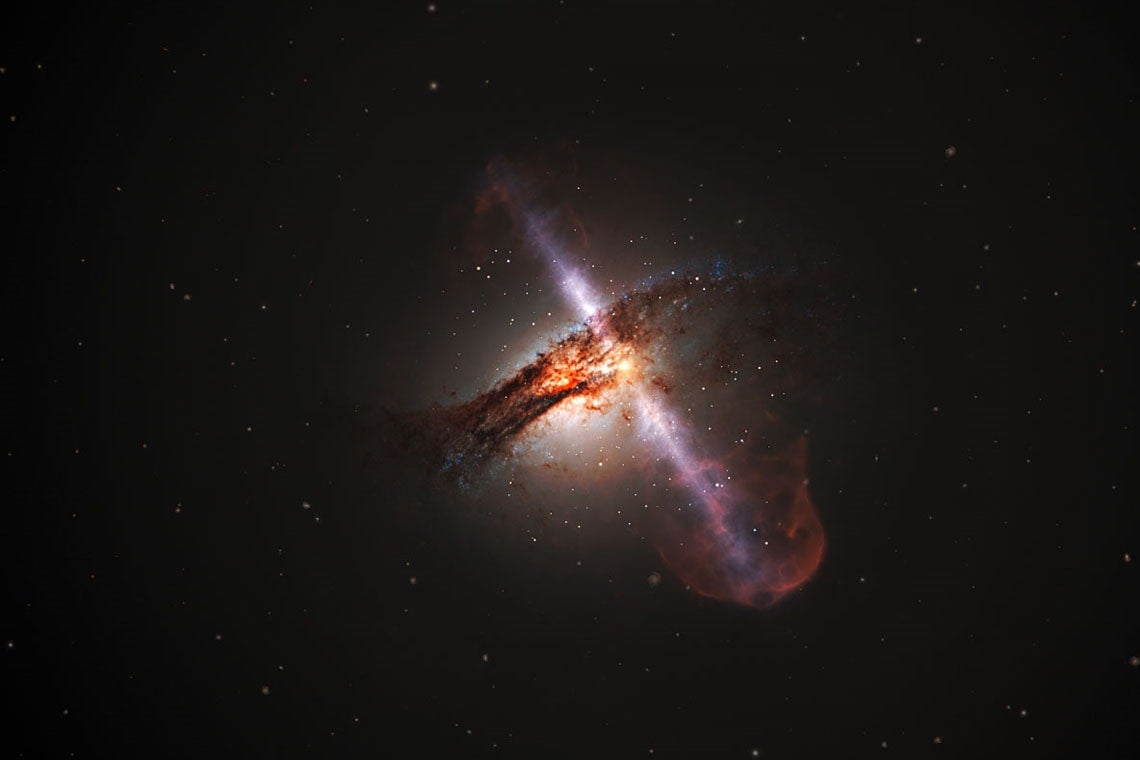 A team of astronomers has doubled the number of known young, compact radio galaxies – galaxies powered by newly energized black holes. The newly found 1,500 galaxies will help astronomers understand the relationship between the size of these radio sources and their age, as well as the nature of the galaxy itself.

In particular, it will help astronomers understand why there are so many more young radio galaxies than old.

“These compact galaxies used to be as rare as hen’s teeth,” says Professor Bryan Gaensler, a co-author on the paper and director of the Dunlap Institute for Astronomy & Astrophysics at the University of Toronto. “But now we’ve been able to discover a huge number of new cases. This breakthrough will let us begin to study the overall properties of these unusual and important objects.”

A radio galaxy is a galaxy that shines brightly at radio wavelengths. A super-massive black hole – typically with the mass of millions of suns – powers this outpouring of energy.

Gas and dust fall into the black hole, releasing vast amounts of energy. The energy is focused into two jets of particles, travelling in opposite directions at nearly the speed of light. As the jets blast through the galaxy, each generates its own lobe or hot-spot of radiation as it interacts with the gas in the galaxy.

In a survey of ninety thousand radio galaxies, the astronomers identified the radio compact galaxies among them. The results are described in a paper published Feb. 20 in the Astrophysical Journal.

“We do not understand how radio galaxies evolve,” says Joseph Callingham, a postdoctoral researcher from the Netherlands Institute for Radio Astronomy (ASTRON) and lead author on the paper describing the result.

“For a long time, we thought all small galaxies evolved into massive galaxies. However, we have now found far too many small galaxies relative to the large ones. This suggests some never make it to the ‘adult phase’.”

According to one model, compact radio sources are young because the jets have not had time to reach far beyond the central black hole. The hot-spots are relatively close together and look like compact sources. Over time, the jets reach farther out into the galaxy and even beyond its confines; the hot-spots are farther from each other, and they are seen as a more extended, double-lobed source.

However, another model argues that the relationship between the age and observed size of a radio galaxy is not so straightforward. That’s because a compact source may be compact not because it’s young, but because gas within the galaxy is dense enough to prevent the jets from extending far from the central black hole, meaning it remains compact despite its age.

“This study shows that it is possible a dense environment near the heart of the galaxy hinders and stops galaxy growth,” says Callingham, who did much of the research as a PhD student with the Australian Centre for All-shy Astrophysics (CAASTRO).

The astronomers made the discovery using data gathered with the Murchison Wide-field Array (MWA), an interferometric radio telescope in the Western Australian outback. The discovery was possible because, unlike conventional radio telescopes that observe tiny patches of the sky at a time, the MWA sweeps large areas of the sky and is capable of observing across a broader range of wavelengths.