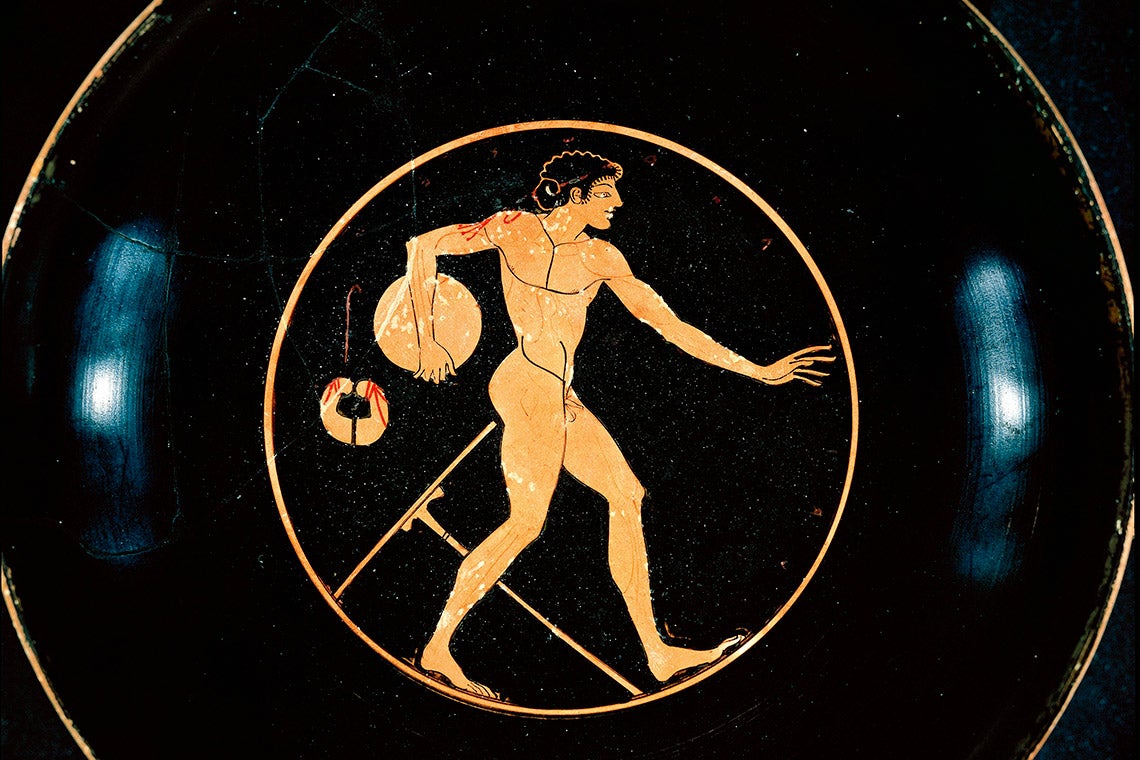 Red-figure pottery depicting a disc-thrower from the fifth century B.C. who is surrounded by implements used in the long jump – another contest that made up ancient pentathlons (photo by DEA Picture Library/De Agostini via Getty Images)

As they watch the Olympic Games in Japan, a group of University of Toronto students is learning about the origins and historical significance of such athletic competitions, which began almost 3,000 years ago.

The third-year course, offered by the department of classics in the Faculty of Arts & Science, is called Sport & Festival. It’s taught by PhD candidate Naomi Neufeld.

In the class, students explore the role of athletic contests and religious festivals in ancient Greek and Roman societies, examining the athletic events’ political, social and religious impacts.

“We look at the competitors,” says Neufeld. “What is their social status? What political significance is behind hosting these games? What religious significance is there? We interrogate further for our understanding of the Greek and Roman world.

“I'm an archaeologist so context is everything. Without understanding the bigger pictures, you only get an isolated look.”

Compared to the ancient world, some Olympic events haven’t changed that much, though Greek athletes originally competed in all stadium events in the nude.

“It was one of the most important elements of the games,” says Neufeld, noting that training and competing nude was a source of pride. “In fact, the Greeks looked down upon those who exercised clothed as ‘barbarians.’”

Attire aside, many of the running races and other track and field events, as well as wrestling and boxing, remain relatively unchanged.

“They also had a sport called pankration, which was a mixture of boxing and wrestling,” says Neufeld – essentially a Greek version of mixed martial arts.

Few events brought people to their feet like the chariot races – so often celebrated in Hollywood movies. “In the ancient world, chariot races were one of the best and most exciting events,” says Neufeld.

Another similarity between the ancient games and today’s games? Different sports came and went over time.

In some of the early games, Greeks held a mule cart race called the apene, which were nowhere near as fast or flashy as horse chariot races. “This event fell out of favour during the Classical period,” says Neufeld.

There was also a race called the kalpe that involved competitors riding a horse around a track for several laps and then dismounting and running the final lap on foot beside it.

There was a marked difference between the meaning of the games in ancient Greece and ancient Rome, explains Neufeld.

“In Greece, these games were exclusive to free Greek citizens,” she says. The athletes were of high social status, often considered the elite of society. And they proudly represented various city states known as a polis. Their success in the games was seen as representative of the polis’ ability to produce outstanding citizens. The Greeks also firmly believed that physical strength and a pleasing physical appearance represented strong character or ethos.

In Rome, the games had a different function. Athletic events were more of a spectacle than a competition – and became powerful political tools.

“Participants in these games were of low status,” says Neufeld. “The elite would watch them as a form of entertainment. And if politicians put on lavish games, they could get support for running for political office, or the emperor could get support of the people and appease them in times of trouble.”

It’s from such competitions that the phrase “bread and circuses” was invented by the Roman satirist, Juvenal. The phrase means to generate public approval – not by excellence in public service, but by diversion or by satisfying the base needs of a population by offering food and entertainment.

Roman politicians generated plenty of support through events that featured the gladiators. But it wasn’t quite as Hollywood depicts, says Neufeld.

“The earliest games recorded in Roman history took place in conjunction with funeral events. As such, the violent sport has been interpreted as a type of ritual bloodletting to appease the ghosts of the departed,” says Neufeld. “And it wasn’t simply about brutal slaughter. That was reserved for public executions. Spectators wanted to see evenly matched opponents fighting with skill, endurance and fortitude.

“If a defeated gladiator fought well and bravely, he could be spared.”

Despite the differences, athletic competitions for both cultures had deep ties to religion.

“Greek athletic competitions were held during religious festivals in honour of the gods and may have been seen as offerings to the deities,” says Neufeld. “Major games where Greek citizens of all poleis could gather together and compete were held in religious sanctuaries like Delphi and Olympia, where gods had temples and sacrifices could be made in their honour.”

In early Rome, victorious generals vowed to hold ludi (athletic games and chariot races) if the gods would grant him military success. “These games were then held as thanks to the deities,” says Neufeld.

Sarah Cassidy, a fourth-year political science student at University College who is minoring in classics and sociology, says she is enjoying the course.

“I wanted to learn more about the social lives of ancient Greeks and Romans,” she says. “We hear so much about the Olympics, chariot races and gladiators, but prior to this class, I really only had a general knowledge from media materials and culture. I wanted to delve deeper and learn more about the lesser-known festivals and the impacts these events had on the lives and history of the ancients.

“I didn't expect to learn how important these festivals were to not only the citizens and cities, but how necessary they were in protecting, expressing and maintaining Greek and Roman identities.”