Overcoming prejudice and poverty: Meet U of T grad and 'doctor of the future' Amanda Khan 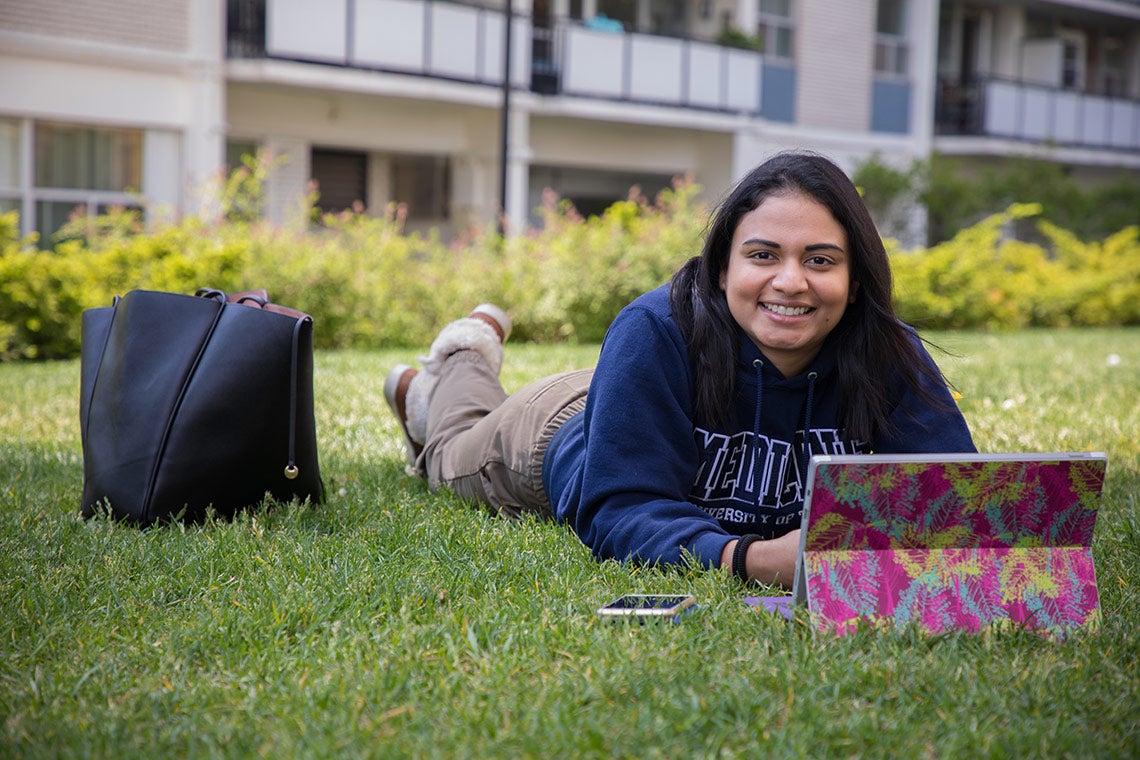 Amanda Khan, who received scholarship support from U of T and is now graduating with an MD and PhD, says she is the first in her extended family to receive an advanced degree (photo by Johnny Guatto)

Amanda Khan’s graduation from the University of Toronto’s MD/PhD program marks a giant step toward her goal of becoming a surgeon-scientist. But more than anything, she’s looking forward to becoming the kind of mentor and role model that she didn’t have growing up.

Born and raised in Trinidad and Tobago, Khan moved to Canada with her family and grew up in Toronto’s Rexdale neighbourhood.

She always wanted to be a doctor and a scientist, but says she had no one to look up to.

“It’s hard when you don’t have examples of people from your community going to medical school, because no one I knew from my neighbourhood went to university or did an advanced degree,” Khan says. “None of us has ever done this level of education. There’s no one in my family or extended family who’s a physician or went to grad school.”

But what Khan lacked in role models or financial backing she more than made up for with determination, force of will and the encouragement of her loved ones. She is now graduating with a Doctor of Medicine (MD) from the Faculty of Medicine and a PhD from the Institute of Biomaterials and Biomedical Engineering (IBBME) in the Faculty of Applied Science & Engineering.

Along the way, she has racked up numerous awards, including a Canadian Medical Hall of Fame award, a Vanier Canada Graduate Scholarship and being named one of Canada’s 100 most powerful women by the Women’s Executive Network. She’s now set to begin a five-year residency in radiation oncology in Calgary.

It’s been a long road for Khan, who recounts the abject state of her bank balance when she was applying to MD/PhD programs across Canada and the U.S.

“I literally had $200 remaining in my bank account,” Khan says. “I wouldn’t have been able to pay rent that month if I didn’t get into MD/PhD because I put every dollar I had into trying to get into this program.”

Khan, who did her undergraduate and graduate degrees at Western University, says she was drawn to U of T because it’s a world-class research institution with top-notch hospital affiliations and a generous financial support program.

“U of T gave me the most money in scholarship support – and that was very important for me because I had so much debt from my undergrad and master’s. I’m from a poor family so I needed financial assistance and U of T was brilliant in financially supporting me through these eight years,” Khan says.

“U of T also has the biggest MD/PhD program in the country and you’re learning at world-class institutions like IBBME, IMS [the Institute of Medical Science], [the department of] medical biophysics – and with the kind of clinical research I wanted to do, obviously the hospital connections U of T has are the best.”

It was one of those hospital connections that gave Khan the inspiration for her PhD research. In her first year, Khan took part in Day of the Doctor, an initiative where medical students shadow a physician for a day.

Khan was paired with a general surgeon at St. Michael’s Hospital who was performing laparoscopy – a type of surgery where small incisions are made in the abdomen using elongated tools, with the aid of a camera.

One of the challenges with laparoscopic surgery is that surgeons don’t have the tactile feedback that they would have during a conventional surgery, so it’s not uncommon for them to inadvertently tear tissue by grasping it too hard or applying too much force. This can lead to internal bleeding, infection and even death.

Watching the surgeon go about his surgeries, Khan wondered out loud how the amount of force applied by laparoscopic tools could be measured to stay within a safe range.

“I asked, ‘How do we know how much force we should be applying with these laparoscopic tools? How do you even prove such a thing and how do you make the tools smarter so that they will automatically make surgeons not go into the dangerous force zone?’ So the doctor was joking with me and said, ‘Maybe you should do your PhD on it’ – and so I did.”

It’s a field of research that involves a heavy emphasis on engineering, which isn’t Khan’s background. She credits her husband, who graduated from U of T with a degree in mechanical engineering, for playing a key role in her PhD.

“For me to learn all the engineering stuff during my PhD was really challenging – really hard. Electrical engineering, mechanical engineering – he was absolutely instrumental in showing me how to do all those things. I dedicated my PhD to him,” Khan says.

In addition to the challenge of navigating complex engineering terrain, Khan says it was difficult to progress through two different programs and cohorts.

“It’s hard because you start medical school with a medical school class, and then you have to withdraw to your PhD while your friends from your original class go on and become physicians and residents while you’re doing your PhD,” she says.

“Then when you come back to medicine, you’re in a different class. It’s hard because you see your friends who are already physicians and practising after four years.”

The program’s workload meant Khan had to make plenty of sacrifices.

“There were friends’ weddings I couldn’t go to, family events I couldn’t go to, parties that I can’t go to because I’m on call or I’m studying or defending my thesis,” she says. “There are all these things you miss out on. You have to be willing to make sacrifices.”

Khan says what kept her going was keeping her an eye on the ultimate prize “of being a physician who does translational research that directly benefits my patients.”

A champion of diversity and representation in the STEM fields, Khan set up the Research Application Support Initiative, a U of T Community of Support program that connects students to research positions and mentors to guide them on their journey to get accepted into medical school and other graduate programs.

“I’ve had a lot of success with people whom I’ve mentored getting into medical school and who are now lifting their families out of poverty, says Khan. “I think that’s a big deal and I’m really glad U of T supports that.”

However, Khan says there’s a long way to go when it comes to diversity.

“As a brown woman, I’m often discounted. I’ve had physicians tell me it’s a shame I’m not my husband – who’s a white man – because my research would’ve been taken more seriously,” she says.

“You face racism even in Toronto, even from physicians, even from engineers. You face sexism as well, especially in surgery. It’s still an old boys’ club and I’ve had a few surgeons tell me that surgery is for men, not for women.”

Indeed, one of Khan’s missions as she heads to Calgary is to expand the Communities of Support program and make a contribution toward making the fields of medicine and engineering more diverse and welcoming to people of all backgrounds.

“I want medicine to be very diverse,” she says. “I want there to be representation from everybody. If we’re supposed to be treating society – which is made up of hundreds of different backgrounds, cultures, religions, sexual orientations – these are the people who should be in medical school and should be the doctors of the future.”