Order of Canada awarded to dozens of U of T researchers, activists, artists and leaders 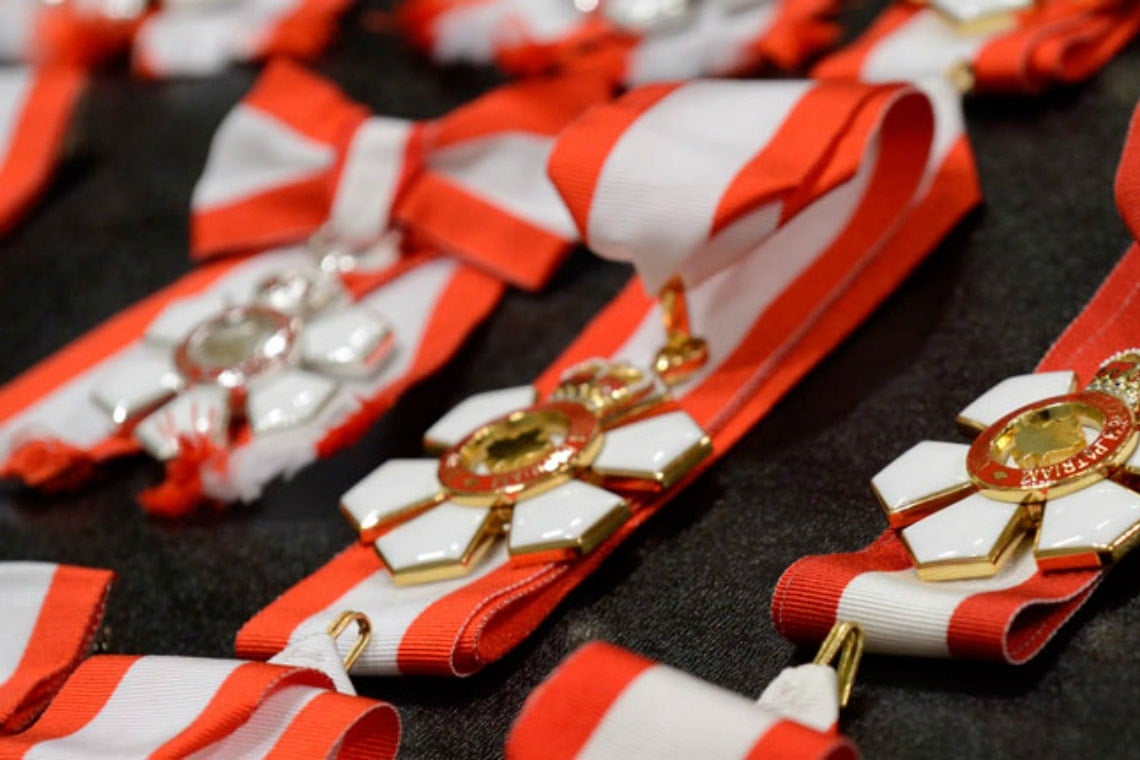 Faculty, alumni and supporters comprise nearly half of the remarkable Canadians honoured by the Governor General

Canadians of all backgrounds, from opera singers to scientists, were recognized with the Order of Canada last week – including more than 40 members of the U of T community.

The list of 100 notable Canadians was released by Gov. Gen. David Johnston on Dec. 30.

“I am delighted to recognize these new recipients of the Order of Canada in this milestone year,” said Johnston. “Besides marking Canada’s 150th anniversary, 2017 marks the 50th anniversary of the Order. So let’s be inspired by the examples set by these remarkable Canadians and use this occasion to build a smarter and more caring country in which every individual can succeed to the greatest extent possible.”

Alumnus and acclaimed author Michael Ondaatje was promoted to the rank of Companion, one of only three Canadians named at this time to the order’s highest honour. He was joined by many U of T community members promoted within the Order or receiving their first appointment to the Order.

Below are just a few examples of the many U of T community members whose remarkable contributions to their country were recognized this December:

Professor Peter Martin of the Faculty of Arts & Science was named an Officer of the Order for “his innovative research on interstellar matter and for establishing two world-renowned institutes of astronomy and astrophysics.” Renowned professor emeritus of anthropology Richard Lee was also named an Officer for “his contributions to anthropology as a scholar and mentor, particularly for advancing our understanding of hunter-gatherer cultures.” Former Ontario Minister of Finance Janet Ecker, a member of U of T's Governing Council, was named a Member of the Order for “her contributions to provincial politics in Ontario and to Canada’s financial services industry.”

The appointments recognized a diverse array of contributions. U of T's Russell Braun, a lecturer of opera and baritone who has performed at such storied venues as the Metropolitan Opera in New York and La Scala in Milan, was named an Officer of the Order for his accomplishments in music and as a “cultural ambassador for our country.” Master of Massey College Hugh Segal was promoted within the Order to Officer for “his commitment to public service and to effective public policy as a scholar and senator.” Professor Emeritus James Falls of the department of ecology and eveolutionary biology in the Faculty of Arts & Science was named a Member of the Order for “his development of ground breaking research techniques in ornithology and for his lifelong leadership in nature conservation.”

Alumnus William Downe, CEO of BMO Financial Group, was named a Member of the Order for “his commitment to enhancing diversity and inclusion in the financial industry and for his generosity in support of education and health-care initiatives.”

Professor Ron Daniels, alumnus and former dean of U of T's Faculty of Law, was named a Member of the Order for “his contributions as a university administrator and for his achievements as a champion of community engagement.” And Michael Ignatieff was named to the Order for his “contributions to the advancement of knowledge as a human rights scholar and reporter.” A U of T alumnus and Rhodes Scholar, he returned to teach at U of T after leading the federal Liberals from 2009 to 2011 and is now president and rector of the Central European University in Budapest.

Many more honourees came from the world of medicine. Dr. Charles Tator was promoted to an officer of the order for “his advocacy as a world-renowned authority on concussions and for promoting increased safety in sports.” Neuropsychologist Donald Stuss was named an Officer of the Order for “his contributions as an internationally respected neuropsychologist who has expanded scientific understanding of brain function, injury and rehabilitation” and biochemist Lewis Kay was named Officer of the Order for “his pioneering research in biochemistry and medical imaging science which explores the structure and behaviour of proteins.”

Dr.  Michael Tymianski was named a Member of the Order for his work in neuroscience, “particularly through his leadership in investigating new mechanisms to protect the brain following a stroke.” New Members also include Ash Prakash, who endowed an international surgery fellowship at U of T, and alumnus Dr. Michael Dan.

Dr. Dan and alumna Amira Dan have donated $2 million to establish the U of T Brain Tumour Bank, which helps researchers in U of T’s health sciences network make more rapid progress towards treating people with brain cancer. And they have donated $10 million to create the Waakebiness-Bryce Institute for Indigenous Health at U of T's Dalla Lana School of Public Health.

Dan's citation recognizes “his contributions as a philanthropist, notably for his partnerships with Indigenous people”.

This year’s appointments join the nearly 7,000 other people who have been invested in the Order of Canada since it was established 1967. You can read about all the members of the Order – including more of this year's recipients from the U of T community – at the Governor General of Canada website.