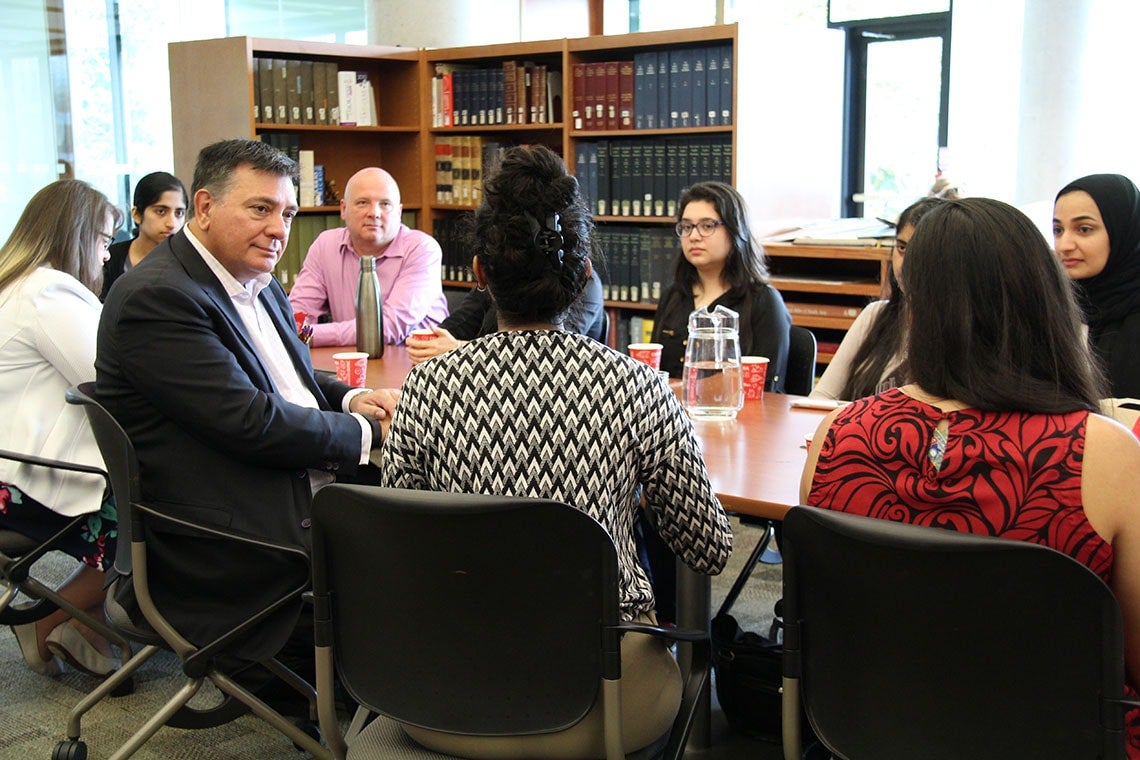 The Ontario government is reaching out to University of Toronto students for feedback on its efforts to ease the economic burdens faced by post-secondary students.

Today, Finance Minister Charles Sousa held an informal roundtable discussion with eight University of Toronto Mississauga students to discuss its initiatives to make learning more affordable for post-secondary school students. Chief among them is its revamping of the Ontario Student Assistance Program so that university and college tuition is free for students whose families make less than $50,000 a year.

Students from families who earn more will benefit from more generous grants and loans. Overall, 80 per cent of all OSAP recipients will graduate with less provincial debt than they would have under previous OSAP rules.

“I’ve met many bright individuals who didn’t attend post-secondary school because they were worried it was beyond their means,” Sousa said. “By making higher education more affordable, we can enable more people to enjoy the benefits of a strong education and become more marketable in the job force.

A similar event was held at University of Toronto Scarborough, where Minister of Education Mitzie Hunter and Tracy MacCharles, minister of government and consumer services, met with some students, including representatives of the Scarborough Campus Student Union.

Ontario has also relaxed some expectations for repaying OSAP loans. Starting in 2018, graduates won’t have to pay back their loans – and won’t accumulate any interest – until they make at least $35,000 per year, up from the current amount of $25,000 per year. This single-largest modernization ever of OSAP is driven by the province’s goal to remove financial barriers to higher learning in order to create jobs, grow the economy, help people in their everyday lives and attract international students, talent and investment.

“When we promote education, talent and skills and invest in our human capital, that is what companies are looking for,” Sousa said. “Having a great education system makes us very attractive to people around the world.”

Bruce Kidd, U of T vice-president and principal at U of T Scarborough, gave opening remarks at the Scarborough session. He said the OSAP changes encourage “optimism” about the future of Ontario students.

“Students should be making decisions about their education based on their potential, not on their ability to pay,” he said. “This long overdue reform of OSAP means many more students will be able to take advantage of higher education opportunities in Ontario, and make decisions that are truly life changing.”

The Mississauga students – who came from academic areas such as biology, anthropology, political science, criminology and accounting – provided largely positive feedback on the ministry’s initiatives. They also shared their concerns on different aspects of managing their post-secondary education costs, including the difficulties of balancing a part-time job with their education, affording student housing and meal plans, covering the relatively higher tuition fees for deregulated programs, and finding internships.

Sousa sympathized with the students, and explained how transforming OSAP will address some of these challenges, and will contribute to greater overall economic prosperity, which will help them get well-paying jobs when they graduate. He also highlighted other key government initiatives that will make life easier for students, such as:

U of T is also committed to ensuring inadequate financial means doesn’t prevent any admitted student from attending the university. To that end, it provided almost $200 million in student assistance in 2015-16 – a 6.6 per cent increase over 2014-15 levels. That same year, the university also provided an average of $5,205 per recipient in Student Access Guarantee support – for those needing additional financial help beyond what OSAP can cover – which far exceeded the system average of $1,863 per recipient.