OCCAM: advancing research from the depths of the ocean to outer space 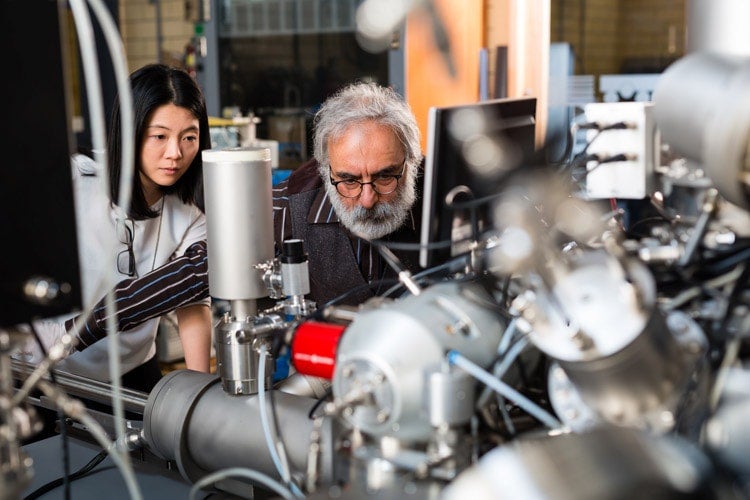 The Ontario Centre for the Characterization of Advanced Materials (OCCAM) – a $20 million analytical laboratory at U of T’s Faculty of Applied Science & Engineering – has officially unveiled its newest machines and is ready to take on new industrial partnerships.

Nearly 200 people attended the official opening on May 12. They included faculty from across U of T as well as industrial partners and representatives from funders Canada Foundation for Innovation (CFI), the Ontario Ministry of Research and Innovation (MRI) and Hitachi High-Technologies Canada. The facility is a joint initiative between the department of materials science & engineering (MSE) and the department of chemical engineering & applied chemistry (ChemE).

The facility contains leading-edge equipment for imaging, analyzing and manipulating materials with nanometre-scale precision. These insights will help researchers understand the natural world and design better devices, from dental implants to microchips, solar cells, aircraft and much more.

The centre, which builds on earlier facilities dating back to the 1990s, is based on a collaborative model. Each year, researchers from across U of T and external industrial partners bring hundreds of samples to OCCAM for analysis.

“We’ve looked at everything from volcanic glass from the bottom of the ocean to rocks that the Apollo astronauts brought back from the moon,” said Rana Sodhi, senior research associate with OCCAM and adjunct professor (ChemE). Findings from the centre have advanced research in a bewildering array of fields, from tracing the path of Hannibal through the Alps to analyzing dinosaur feathers preserved in amber.

Solar cells have multiple layers: some are designed to capture light, others to conduct electricity. To measure how well they are performing and design better devices, researchers need detailed information about the optical, electronic and optoelectronic properties of each layer.

One of OCCAM’s newest tools is the Escalab 250Xi, which is capable of firing a concentrated beam of x-rays at the surface of a material. These high-energy beams of light can eject electrons out of their orbitals into a detector, which in turn provides information about the electronic properties of the original material.

Traditionally, this technique, known as x-ray photoelectron spectroscopy, can only penetrate 10 nanometres into the surface, but the Escalab 250 Xi has a secret weapon. It is capable of firing clusters of argon atoms at the surface, which gently strip away the upper layers and expose what is underneath without losing molecular information. “It’s like peeling the skin of an onion away,” said Sodhi. “Let’s say we want to do a depth profile; we can take a measurement, then erode the surface, measure again and repeat.” The same secret weapon is available on the new secondary ion mass spectrometer.

This ability to provide detailed information at any given depth will allow researchers to optimize the design of next generation solar cells, which could improve the efficiency and lower the cost of solar energy.

Researchers in Professor Elizabeth Edwards’ lab (ChemE) are looking to improve municipal wastewater treatment systems by studying the natural microorganisms that break down chemical waste. However, details on the surface of these organisms are too small to be seen with a normal microscope; at less than 500 nanometres they are smaller than most wavelengths of visible light.

Electron microscopes solve this problem by using a beam of electrons, rather than light, to illuminate the surface and pick out details that can be thousands of times smaller than the width of a human hair. OCCAM has five advanced electron microscopes, some of which are particularly suited to Edwards’ work.

“With traditional electron microscopes, you have to coat the sample in a conductive material like gold,” said Edwards. “Often the coating is thicker than the features you’re trying to see. The advanced techniques at OCCAM mean that you don’t have to coat the cells, so you can see them as they actually are.”

By examining how the organisms change when subjected to various types of treatment, Edwards and her team hope to increase the recovery of clean water, reduce the volume of waste and improve the overall efficiency of wastewater treatment.

3. Unlocking the secrets of the proteins with nanoIR

Our cells are covered and filled with proteins, molecules that spontaneously build themselves and control everything from our mood to our metabolism. When these proteins are disrupted — whether by genetic mutations, disease or toxins — we get sick. Professor Chris Yip (IBBME) and his team study how these proteins self-assemble and interact, which in turn could lead to new strategies to treat disease and improve human health.

The team makes extensive use of a tool called nanoIR to image protein molecules. It’s a two-step process: first, a tiny needle is dragged across a surface, building up a 3D topographical map of how the the molecules are shaped and organized. After that, the team can pick any point on the surface and fire a beam of infrared light at it. By analyzing what frequencies are absorbed or reflected, the team can learn about the local chemical structure and bonding.

“The tool serves an important role not only in my area of research, but in our overall understanding of nanoscale material structure, composition, and conformation,” said Yip.