‘An obligation to fill the vacuum’: U of T President Meric Gertler leads climate change discussion at Paris summit 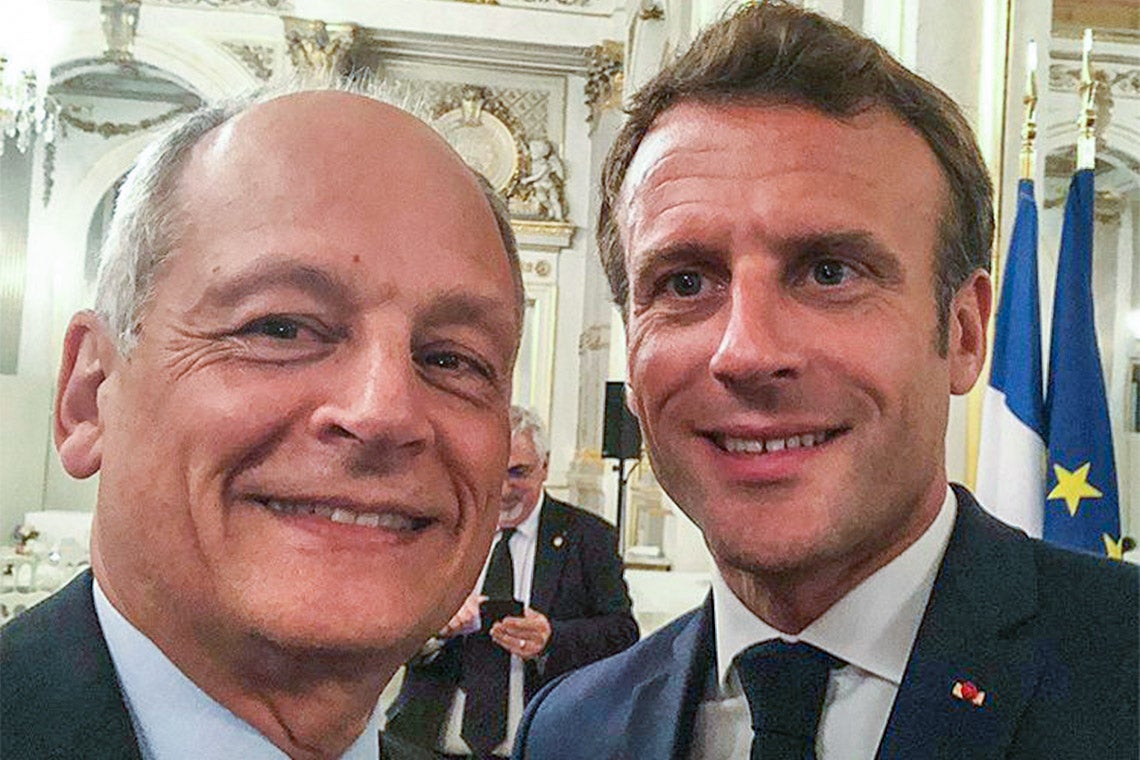 The University of Toronto – represented by President Meric Gertler – was one of 47 universities that recently met in Paris to reach agreement on how post-secondary institutions can play a leadership role in addressing urgent global issues, from climate change to income inequality.

The group of universities, from 18 countries around the world, belong to the U7+ Alliance that was established by France as a way to dig deeper into the issues to be discussed by world leaders at the upcoming G7 summit in Biarritz.

At the alliance’s summit in Paris earlier this month, leaders from the U7+ universities committed to addressing collectively five pressing international issues: the role of universities in a global world; climate change and energy transition; inequality in societies; technological transformations; and community engagement and impact.

“The hope was that, by creating this group, there would be an action-oriented network that would leverage the resources of universities around the world to tackle some of the really big issues the planet is facing – and that presumably the G7 leaders are going to be losing sleep over,” said President Gertler, who led the summit’s discussion on climate change and sustainability, informed in part by U of T’s leadership in this area.

As a major outcome of the U7+ meeting, the group voted unanimously to adopt six principles:

Equally important, the U7+ leaders drafted a series of “action items” related to each principle, such as increasing the scope of community partnerships, improving energy efficiency on campuses and assisting more students in their ability to attend university.

University leaders later presented their work to French President Emmanuel Macron at a dinner reception that took place at the Élysée Palace. At the event, President Gertler briefed Macron on the U7+ Alliance’s commitment to addressing climate change.

U of T News recently spoke with President Gertler about the U7+ Summit, U of T’s leadership on the sustainability front and the need for universities to play a bigger role when it comes to addressing global issues.

Why is it important for universities to work together in this way?

What drew university leaders to this meeting was the commitment to action. It was a great chance to harness the intellectual resources embodied in our students and our faculty in the service of these important goals. It's a unique feature of this network, and it's one that I think everyone at the table was committed to.

U of T led the working group that addressed climate change and sustainability. What went into creating action items related to this principle?

In preparation for the meeting, and to help us spend our time efficiently, the working groups met virtually to generate some language around these principles and to articulate between two and four concrete action items that related to each of the principles.

The University of Toronto was very involved in helping to draft the principle that speaks to climate change.  John Robinson, U of T’s presidential adviser on the environment, climate change and sustainability, and a professor in the Munk School of Global Affairs & Public Policy and the School of the Environment, was a key member of that working group and helped to draft the initial statement of principles, as well as sketch out a number of concrete proposed actions.

The other principles also address some important issues. Principle Four, for example, touches on the issue of overcoming social exclusion, promoting inclusion and opportunity, combating polarization within our society and recognizing that universities have a major role to play in this. U of T is obviously very much aligned with a goal like this and has adopted many concrete policies and actions to make good on such an objective, both in terms of our own operations – our admissions policies, our financial support for students – and also in terms of the research we are doing here, which is addressing many different aspects of growing social and economic polarization within societies. 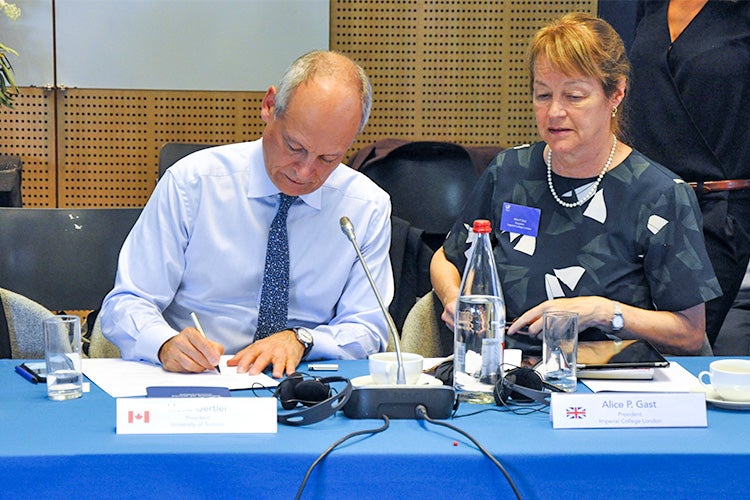 The working groups and the summit culminated in a meeting with President Macron. What were some of the key takeaways?

It was important to convey to President Macron the concrete actions that we were committing to undertake. High-level principles are great, but they're not worth the paper they're printed on unless they actually lead to specific initiatives.

In our case, we're committing to the goal that all students at our universities, beginning with undergraduates, would have access to courses related to climate change, biodiversity and sustainability more broadly, as a way of enabling them to have a working knowledge of the science and social science underlying these issues – not just the nature of the problems, but how one would craft mitigation strategies.

The second concrete action related to operations on our campuses and ways we can “walk the talk” by actually reducing our own greenhouse gas emissions – reducing our use of energy, increasing the efficiency with which we make use of resources like water and other scarce resources, and committing to some very ambitious goals. This is something U of T is already doing, thanks to our President’s Advisory Committee on the Environment, Climate Change and Sustainability, so for us it was easy to lead on this one and to demonstrate that it was actually quite feasible.

What are some of U of T's sustainability initiatives?

The second annual report of the President’s Advisory Committee on Environment, Climate Change and Sustainability is full of amazing content documenting the progress we are making in a number of different spheres.

In the area of education, the committee has proposed a framework to enable students in any program to acquire competency in sustainability issues. They've also done a great job in documenting existing teaching in this area and distinct learning opportunities.

They are also moving ahead in giving life to the notion of the campus as a living laboratory and demonstrating how we can take advantage of both new construction projects and significant renovation projects on all three of our campuses to provide learning opportunities for our students to study these projects in real time – and potentially enhancing the success of those projects by feeding in their own work and research.

In terms of our own operations, we are putting the finishing touches to a very detailed plan for enabling the university to reduce its greenhouse gas emissions by 37 per cent relative to our 1990 levels, demonstrating that it is feasible and that there are specific, concrete steps we are already taking, or will soon be taking, in order to meet this very ambitious goal.

In his opening marks at the dinner, President Macron touched on climate change as one of the best examples of where universities could really lead the way, at a time when some still doubt the science behind it. It's all the more important for universities to step forward and say, “We've done the science, we've reached a very strong scholarly consensus on the evidence supporting these forecasts and we're also doing a lot to generate solutions.”

The summit was also an opportunity to talk about the role of universities in the global context. In a world where inward-thinking nationalist governments are on the rise, do universities play a more important role in civil society – particularly in addressing global challenges?

When we look around the world today, it's not at all clear that nation-states are as good at co-operating with one another as they used to be, or at collaborating with one another to solve big global problems as perhaps they have been in the past. We've seen many examples of nations moving in the opposite direction – less collaboration and less engagement rather than more.

Universities are naturally inclined to go in the opposite direction – building bridges, forging partnerships and collaborating. I would say the enthusiasm for that kind of activity is, if anything, becoming stronger rather than weaker.

On the first day of the summit, when we were talking about high-level issues and the mission for the U7+, there was a general consensus in the room that the moment is exactly right for universities to come together to provide strong global leadership. Even if nation-states can't quite figure out how to work effectively together, that doesn't mean institutions of higher education and research can't do so – and indeed they have an obligation to fill the vacuum. That was a huge motivation for many of us to be there.

What role are Canadian universities playing when it comes to addressing global challenges?

Canadian universities were very well represented at the summit – they punched way above their weight. We were actively engaged in the working groups before the meetings and in the discussions. It was almost to the point where we were apologizing for being so prominent in the discussion. A very Canadian thing – the reflex of apologizing.

Three of the five Canadian university leaders at the meeting, including me, were invited to introduce the work of the working groups on specific principles.

I came away with the sense that U of T in particular, and Canadian universities in general, were ahead of the curve in addressing many of the challenges that were identified and articulated in the six principles.

It's no surprise that we were so involved – we know one another very well and we work together closely. The University of British Columbia, McGill University, Université de Montréal and University of Ottawa are all members of the U15 group, which I chair, and we all came away from the U7+ Summit with this tremendous sense that we are on the right track.

I expect there will be a growing number of collaborations among those five universities in terms of making sure our contributions to the U7+ agenda in the future continue to be very strong.