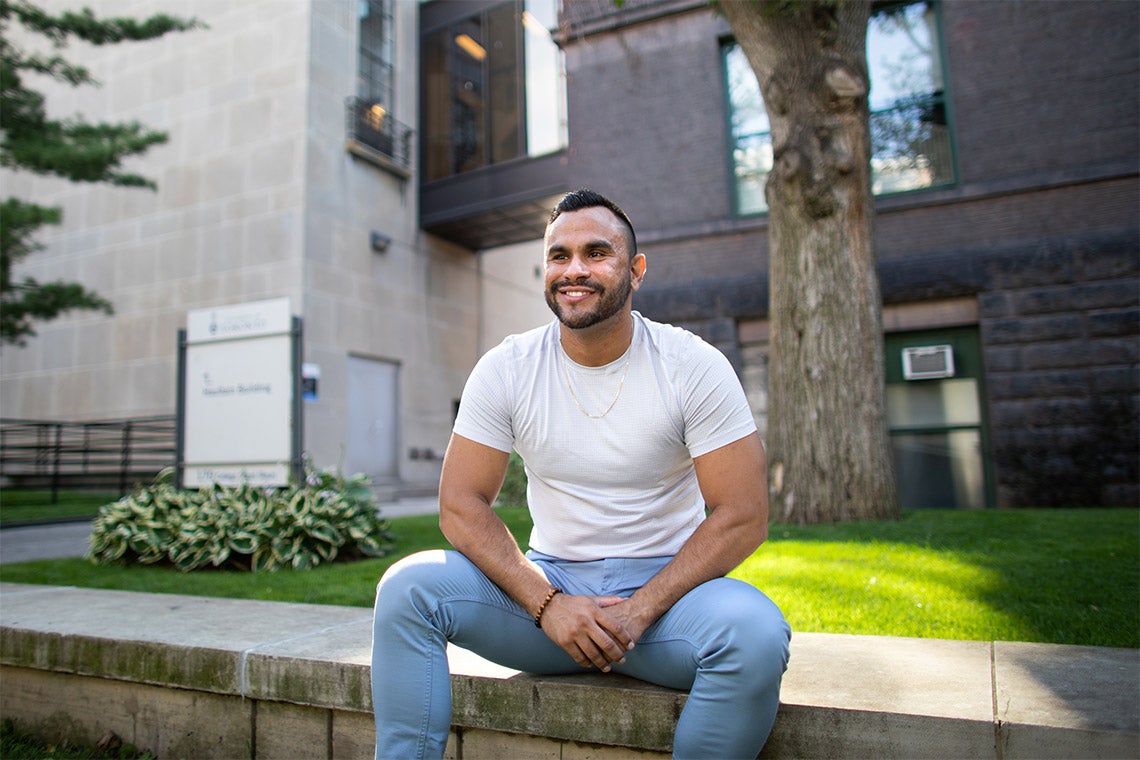 Diego Jesus Rada Rojas fled intimidation and harassment in Venezuela, where he worked in a national radiation safety lab, and is now conducting PhD research on air quality at U of T's Dalla Lana School of Public Health (photo by Nick Iwanyshyn)

Diego Jesus Rada Rojas, a nuclear physicist from Venezuela, arrived at Toronto Pearson International Airport in the summer of 2017 on a flight from Santiago, Chile. He had travelled on a tourist visa – but this was no vacation.

“I told the immigration officer, ‘I have to be honest with you – I’m not here as a visitor. I’m here because I’m terrified to return to my country, I’m desperate and I’d like to see if it’s possible to get political asylum,’” Rojas says.

For years, Rojas had been the head of a national radiation safety laboratory in Venezuela’s Ministry of Health. But his unwillingness to toe the line of the country’s authoritarian government, as well as his democratic thinking, led to intimidation and harassment – harassment that followed him even as he tried to build a future for himself elsewhere in South America.

Now, Rojas is putting down roots in Toronto and at the University of Toronto, where he is embarking on a PhD at the Dalla Lana School of Public Health, focused on air quality. He is one of six scholars this year who are supported by the Scholars-at-Risk Fellowship awarded by U of T’s School of Graduate Studies in partnership with Massey College.

“It’s difficult to explain with words the gratitude I feel for the Scholars-at-Risk Fellowship and the University of Toronto,” said Rojas. “This fellowship helps me be protected and focus on my studies at U of T without worrying about persecution by the regime in Venezuela.”

The fellowship provides a $10,000 grant to outstanding graduate students who are seeking asylum or refugee status in Canada, or whose studies have been affected by the political situation in their country. It also grants recipients the status of Scholar-at-Risk at Massey College.

During his time working at Venezuela’s Ministry of Health, Rojas specialized in occupational and environmental health. He was tasked with improving radiation safety practices in medical facilities in poor and remote regions of the country, where it was not uncommon for defective and outdated equipment – such as X-ray machines and dental scanners – to be used, and where staff were often not adequately trained in radiation safety.

Rojas took it upon himself to create a comprehensive training program for best practices in radiation hygiene. The program was credited with reducing exposure to radiation among both patients and health-care workers.

He says he found the job fulfilling.

“Physicists often have the reputation of being robotic or not sensitive because we’re from exact sciences and usually very into calculation, and it’s not seen as a very human or social profession,” says Rojas. “So, I was so happy that I was able to apply my degree in physics to a very social and public service. It was a great job to be able to work with communities who, because of geographic and economic factors, didn’t have access to basic radiation hygiene education.”

Yet, while Rojas enjoyed his work, his government bosses didn’t always appreciate his democratic views and vocal opposition to the growing authoritarianism of the country’s leadership.

“I was always open with my ideas and convictions, and they made it clear to me that I should be thankful to the government and show my gratitude. They said I had to be loyal to the revolution,” said Rojas. “I said, ‘What revolution? We’re in a free country. What revolution are you talking about? If I’m in this job, it’s because I succeeded in an interview and I have the skills. I don’t have to pay loyalties.’”

Rojas says his bosses began pressuring him to attend meetings to study doctrine and tried to force him to attend parades to prove his loyalty to the government. He refused.

“I was excited to help people, like people in the Indigenous communities who were exposed to high doses of radiation and long-term health problems – and here they wanted me to attend courses to train my brain to communism,” said Rojas. “I didn’t attend them because I wasn’t hired to take courses in communism. It had nothing to do with my work.”

That’s when the overt harassment and bullying took off. Rojas’ benefits, including his health insurance and ration card, were cut and his salary reduced. People began to openly refer to him as “bourgeois” and a “traitor.” One day, he turned up at work to find his desk, computer and work documents destroyed.

Outside on the streets, he noticed he was being followed by men on motorbikes.

“At this point, I realized I was not safe anymore in Venezuela,” says Rojas.

He decided to move to Brazil, where he completed a master’s degree in biomedicine and was beginning to transition to a PhD program. However, the Venezuelan consulate refused to renew his passport, preventing him from continuing his studies in Brazil.

He was accepted into a PhD program in Puerto Rico, complete with a full scholarship and a salary. This time, the Venezuelan government refused to renew his passport. The university in Puerto Rico waited two years for Rojas to resolve his situation, but he was unsuccessful.

Next, Rojas was accepted into a PhD program in Chile, which didn’t require a visa. But Venezuelan authorities refused to certify his degree, so he couldn’t complete his studies there either.

“It was so catastrophic for me,” Rojas says. “I was losing my time, my life. All those international opportunities, PhDs, scholarships ... but the government of Venezuela – or the regime, because it’s not a government anymore – took that away from me.”

In 2017, Rojas was still in Chile as his passport neared its expiry date. He risked being deported to Venezuela, where he was concerned he would be imprisoned.

He had one last trump card: a visitor visa for Canada.

“I didn’t know anything about immigration regulations, refugee applications or political asylum,” Rojas says. “I decided to go to Canada because I had no other choice.”

After explaining his situation to officials at Pearson airport, Rojas was allowed to enter the country and apply for refugee status.

Being in Canada meant he was free from persecution, but Rojas still faced the challenge of re-igniting a career in a new and unfamiliar country. Despite being granted a work permit, he lacked Canadian work experience and struggled to make inroads in the job market.

He eventually enrolled at the City Adult Learning Centre, a secondary school for adults, which offered a co-op component. Through the program, he found a placement at Sporometrics Inc., an environmental microbiology testing lab founded and owned by James Scott, a professor at U of T’s Dalla Lana School of Public Health and head of the school’s occupational and environmental health division.

During his placement, Rojas noticed flaws in existing standards to determine air quality as it pertains to fungal spores.

“This problem with sanitary standards in terms of spores was because there were certain variables that can’t be calculated using regular observation laboratory techniques,” Rojas says. “So, my approach was to introduce some analytics techniques that I extrapolated from my experience with radiation safety and environmental radiation.”

Rojas worked on a methodology to establish improved standards for measurement of fungal contaminants in the air and presented his proposals to Scott. Impressed, Scott encouraged Rojas to apply to do a PhD in his U of T lab.

Rojas was accepted into the program. Now, he’s in the process of securing refugee status and ensuring his own financial security – both goals he says will receive a boost from the Scholars-at-Risk Fellowship.

“A PhD at Dalla Lana is a full-time commitment, so the financial aid will help me to not worry about what I’m going to eat or how I’m going to survive. I can focus completely on my studies,” he says. “Also, receiving the fellowship will help me a lot in receiving my refugee status and permanent residency in Canada ... this support from U of T is strong proof of how I’m contributing to Canada, which is now home to me – the place that I love and the place where I want to contribute and help.”

Ultimately, Rojas says what the fellowship and U of T represent for him is the opportunity to once again have that feeling of fulfilment and meaning that he derived from his job in Venezuela.

“My passion in my profession is to solve problems and to help people,” said Rojas. “This is what the Scholars-at-Risk Fellowship and the University of Toronto are helping me to do – giving me the tools and resources to solve a public health issue and help the Canadian community, which to me is the biggest reward that I can receive.”