Not all stem cells are created equal, U of T study reveals 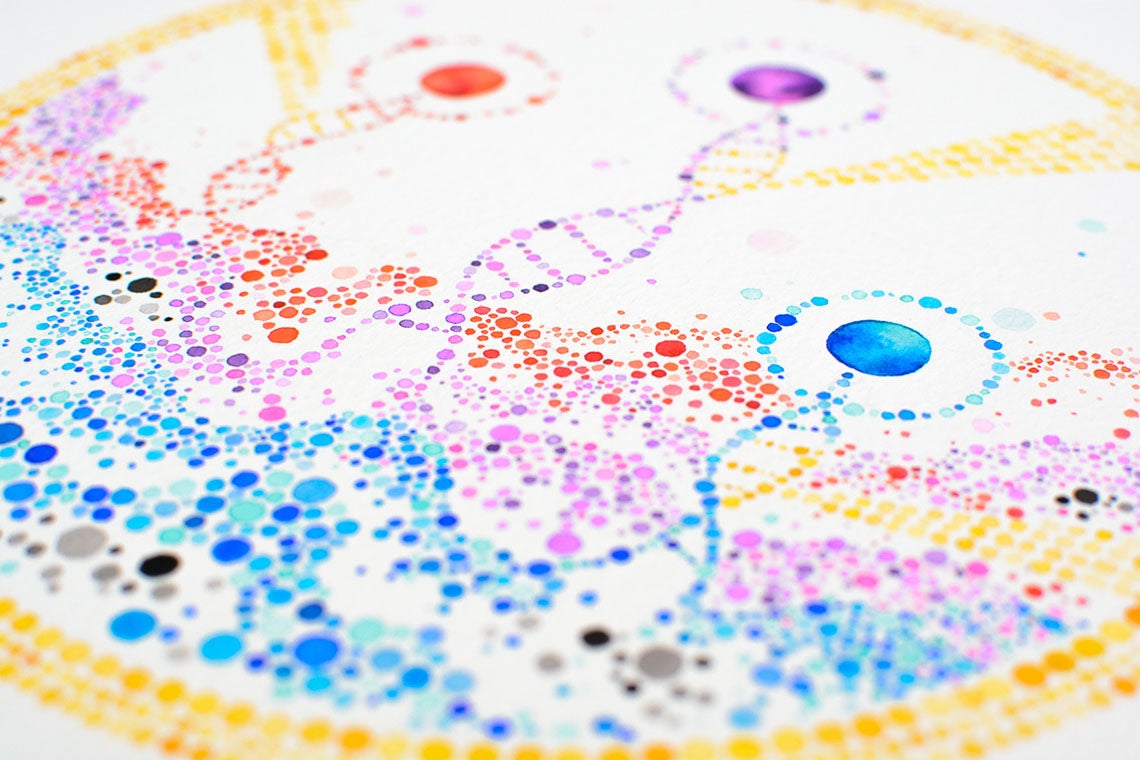 This illustration by Jen Ma, a PhD candidate at U of T, depicts competition between a population of cells. “Elite” cells appear to outcompete their neighbours in the process of becoming stem cells

Researchers from the University of Toronto's Institute for Biomaterials and Biomedical Engineering (IBBME) and the Donnelly Centre have discovered a population of cells – dubbed to be “elite” – that play a key role in the process of transforming differentiated cells into stem cells. The finding has important implications for regenerative medicine.

Stem cells have the ability to transform into specialized cells – from lung to brain. Stem cells are common in embryos, but within the last 15 years, a technique called cell reprogramming has enabled scientists to turn mature cells back into so-called pluripotent stem cells, with the power to develop into any cell type. The technique was recognized with the Nobel Prize in 2012.

While reprogramming is well understood, less is known about the intricacies of how individual reprogramming cells behave in a population setting. University Professor Peter Zandstra’s group (he is a dual appointment at U of T and the University of British Columbia) recently led a study examining this, and found a group of cells that appear to have a competitive advantage in reprogramming. The research is published today in Science.

Zandstra and his team used cells extracted from mouse skin, known as mouse embryonic fibroblasts (MEFs). They used DNA-barcoding technologies to give each MEF a unique tag, track individual cells during reprogramming and associate them with their parent population. They also used computational modelling to help understand the complex data generated and to make predictions that were tested in the lab.

The team found that up to 80 per cent of the original cell population was eliminated after one week of reprogramming. Only a small percentage of the parent generation was fit enough to propagate their clones and turn into stem cells during the stressful reprogramming process. Although these cells have a similar genetic makeup and outward appearance compared to their siblings, their higher fitness enabled them to produce more progeny, that is, clone themselves with greater frequency. The team called these cells “elite clones.”

“Cell fitness is, broadly speaking, the ability of a cell to outcompete its neighbors either directly or indirectly,” says Nika Shakiba, who completed her doctoral studies at the Donnelly Centre and is the lead author of the article.

“There’s direct elimination, where one cell can engulf another one or release chemicals that trigger its death. But there is also indirect competition where cells compete for a pool of limited nutrients and space on the petri dish. It’s analogous to similar sorts of competition in ecology.”

The new finding speaks to a debate within the stem cell community. Some researchers believe that all cells have the capacity to be reprogrammed into an embryonic stem cell-like state, while others believe that only a specific subset of cells have this elite ability. Shakiba says that while there is evidence on both sides, the latest study favours the latter explanation.

“(Our study) challenges people to look at the reprogramming phenomenon through the lens of clonal dynamics – how clones composing a multicellular population compete and how this influences the overall population,” she says.

Zandstra’s team collaborated with Derek van der Kooy, a professor of molcular genetics located in the Donnelly Centre. By using a mouse model developed by co-lead author Ahmed Fahmy, a graduate student of molecular genetics, the authors were able to find a lineage of MEFs that exhibit the properties of “elite clones” discovered by Shakiba. These cells originate from a part of the embryo known as the neural crest, which play a key role in the development of skin, neuronal and smooth muscle cells. The researchers hypothesize that the neural crest cells are "fated to be fit."

“They're lucky and therefore they get a head start in the reprogramming race,” says Shakiba. “By getting to that pre-programmed state earlier, they are going to divide faster than their competitors. After a few generations, that initial head start becomes much bigger.”

This study was a result of an interdisciplinary effort between Toronto researchers, bringing together the labs of Jeffrey Wrana (Lunenfeld-Tanenbaum Research Institute), who made key contributions to the barcoding platform and studies; Sidhartha Goyal, who led computational modeling efforts; van der Kooy, who led the neural crest lineage tracing efforts; and Andras Nagy (Lunenfeld-Tanenbaum Research Institute), who developed mouse reprogramming lines.

The findings in this paper also have significant implications for regenerative medicine, including techniques where stem cells are used to create specific tissues that are then implanted into the body to repair damage.

“Let’s say we want to inject a stem cell population into the body to regenerate the heart,” says Shakiba. “The ability of those injected cells to survive and integrate into native tissues depends on the competitive ability – the fitness – of those cells. Unless we have an understanding and appreciation for how these cells will compete, not only with one another but with the endogenous cells that we are now injecting them into, we are not going to be able to really predict or control what they're going to do in the body.”

“I am really excited about this study because it teaches us a number of new fundament things,” says Zandstra. “Ultimately, it teaches us that cell competition is a controllable parameter that can be engineered to influence the outcome of dynamic regenerative processes.

"This finding should lead to new strategies and technologies to repopulate tissue in vivo post stem-cell transplantation, or to identify ways to make cells more susceptible to competition in clonal diseases such as cancer.”

The research was supported by Medicine by Design, the Canadian Institutes of Health Research and Canada First Research Excellence Fund program funding.