The next blockbuster? U of T startup Protagenic Therapeutics goes public on U.S. stock market 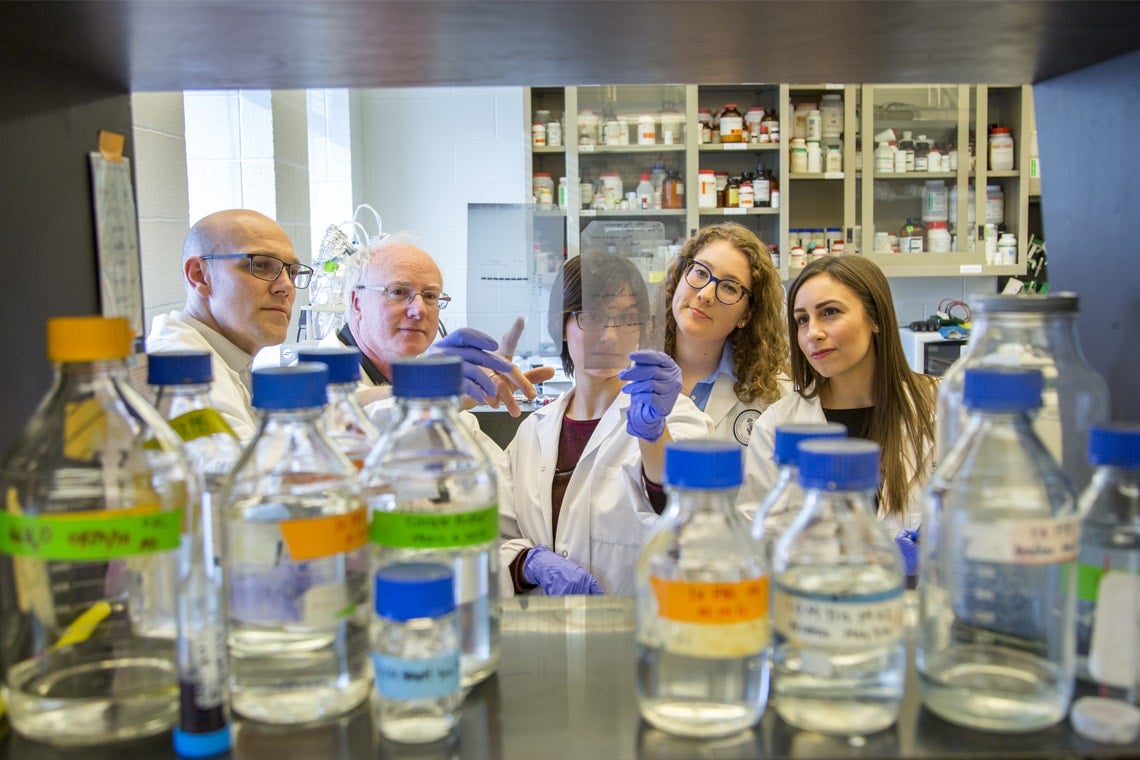 Company fuelled by ongoing discoveries at U of T

The fortuitous discovery of an ancient gene, which made the leap from bacteria to animals hundreds of millions of years ago, could be the next billion-dollar breakthrough in the antidepressant market.

A game-changer in the industry if approved? Absolutely, says David Lovejoy, a U of T neuroendocrinology professor.

The company, Protagenic Therapeutics, founded on research conducted in Lovejoy's lab at the Ramsay Wright building, took a leap forward by getting listed on the New York-based OTCQB stock exchange, considered a stepping stone to the NASDAQ.

“This is an entirely new gene, a new process and a paradigm shift in terms of how we look at drugs to relate to stress-associated pathology like depression, anxiety, addictions, post-traumatic stress disorder and even some of the more psychotic conditions like bipolar and schizophrenia,” Lovejoy explains.

“This could lead to an entirely novel approach to treat addiction.”

And, he says U of T was the source of all the research behind the hormonal drugs tied to this gene.

Thirteen years ago, Lovejoy and his team of student researchers were looking for a family of four genes tied to the stress response in animals when they identified a novel but related gene that was “special.”

“As soon as we had the gene, I went to the University of Toronto Innovations Office [now Innovations & Partnership Office (IPO)] . . . and they got very excited,” says Lovejoy of the Faculty of Arts & Science. As the son of an engineer and businessman, early on he was instilled with the importance of ensuring his research had a practical outlook.

U of T encouraged and supported him in the creation of a company, which eventually located its headquarters in New York City with “a very enthusiastic investor.” A Canadian subsidiary is located in Toronto.

“They were absolutely fantastic,” Lovejoy says of IPO. “They got us involved with a number of people and introduced us to business development officers . . . Had I not received that support, we would have never gone forward.”

So how does an ancient gene impact our emotional states in this fast-paced modern world?

During the process of evolution, Lovejoy’s “special” gene became important for the normal function of brain cells in humans. Protagenic’s natural hormone drugs are based on a small protein encoded by this gene, located on the X chromosome.

When stressed, cells are starved for nutrients. He describes the response as similar to when we have bills piling up and not enough money in our bank accounts to pay.

“If someone hands you a cheque for a $100,000, you don’t have that stress. That’s what this hormone does,” he says. “It protects the cells and turns on their ability to utilize nutrients against neurodegeneration and stressors, but it’s completely natural . . .

“This hormone is so important in humans there are virtually four identical copies of it. It’s the only hormone that is that well conserved. It’s that important. It predates insulin, and yet it does a lot of the same things that insulin does.”

At this time, Protagenic Therapeutics is well into its preclinical work and is expected to start phase 1 clinical trials later this year or early next year for use in treating depression, anxiety and addiction, Lovejoy says. If deemed safe and approved by the U.S. Food & Drug Administration, their product could be on the market in as little as six years.

Going public will help fund these trials, which can take tens of millions of dollars and years to complete. But he says his company has two important advantages: they have a drug that is different, i.e. not in competition with previously approved offerings, and the drug comes from natural hormones “that the body is already prepared to deal with.”

The experience of creating a startup and launching the company publicly has been an exciting ride, Lovejoy says, adding he’s open to talking to fellow academics about taking the plunge.

It’s an idea with growing interest on campus. In the years since he created his company, the number of faculty research-based startups and inventions has skyrocketed at the University of Toronto.

From 2011-2015, IPO reported 837 inventions, 244 patent applications and 89 research-based startups. Those with licensing agreements with U of T — like Protagenic Therapeutics — have generated $49 million in revenue.

“The interaction of Protagenic Therapeutics, the University of Toronto, our department of Cell and Systems Biology and our IP people has been instrumental in our success,” he says. “My grad students and a number of my undergrad students are gaining training in understanding the commercialization process. Indeed, some of them are named as co-inventors on patents.

“I think we’ve achieved a seamless transition between academia, patent protection and commercialization.”

“Few academic laboratories provide experiences with both academia and industry,” she said. “I have been able to publish in academic journals, as well as being named as a co-inventor on patent applications. As a scientist-in-training, it’s one of the best experiences to understand both sides of the coin in discovery and development.”

Jennifer Fraser, IPO’s current director, adds that the university is proud to have been a part of the project.

“ We knew it would be several years before a product would make it to market, but we were able to identify a unique investor,” Fraser says. “Dr. Lovejoy’s passion came through in our discussions with them. That made all the difference.”