New York Times #MeToo writers unravel reporting behind the movement, share thoughts at U of T 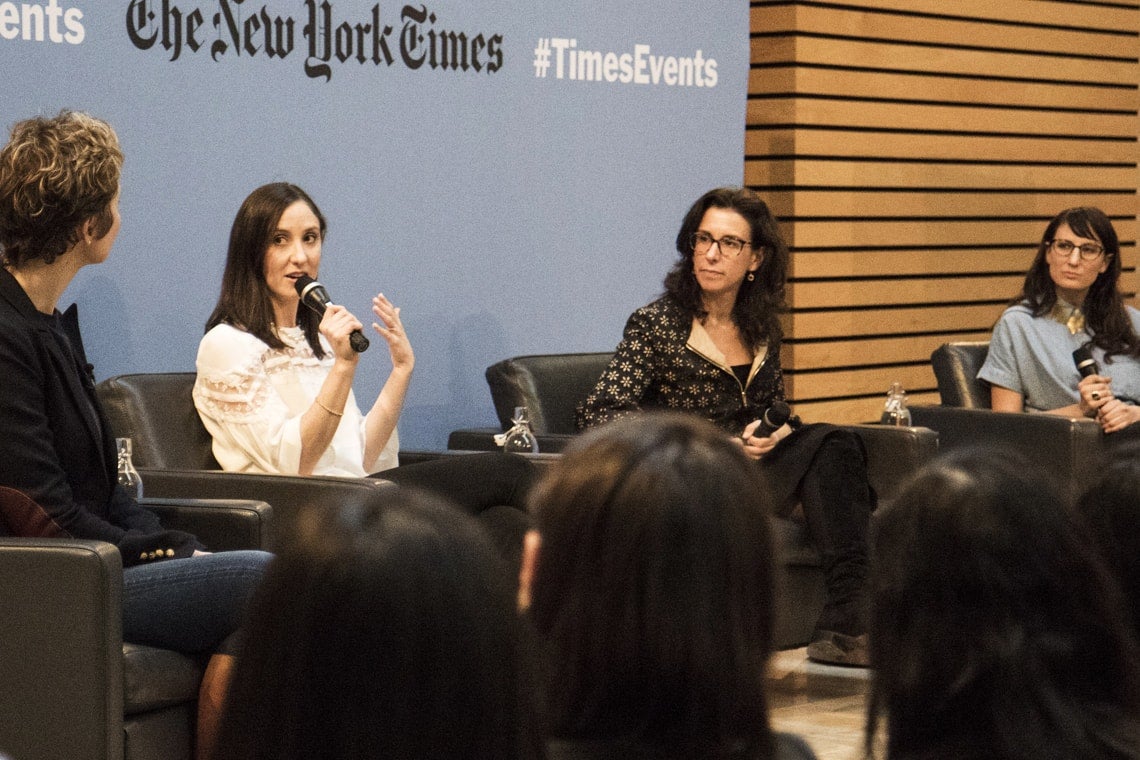 (Right to left) Jessica Bennett, Jodi Kantor and Emily Steel of the New York Times talked about #MeToo investigations and stories, in a panel discussion led by bureau chief Catherine Porter at U of T (photos by Noreen Ahmed-Ullah)

The New York Times exposé that led to the downfall of Hollywood mogul Harvey Weinstein began with two reporters typing up a bio of themselves, highlighting how they were serious, trustworthy journalists whose stories had impact.

“We wanted to sound really tough, frankly,” recalled Jodi Kantor, one of two reporters who uncovered how Weinstein got away with alleged sexual harassment and sexual assault of women for decades thanks to a web of enablers.

Kantor, known here for her work covering the resettlement of Syrian refugees in Canada, also had experience investigating gender-related problems in the workplace, including large corporations. Megan Twohey had written about sexual abuse investigations involving children, including some cases that landed offenders behind bars.

“We needed to convey especially for the actors that we were not entertainment journalists,” Kantor told a standing-room-only audience at the University of Toronto on Wednesday. “A lot of them have been pursued by tabloids their entire lives. For them to begin to trust journalists, and say, ‘I'm going to talk to you, I'm going to talk to you without anybody knowing, and I'm going to talk to you about this really sensitive secret and potentially these bad things,' was a big ask. We wanted them to know who they were dealing with, and feel like we were real people and hopefully we were trustworthy.”

The event, titled Journalism and the #MeToo Moment, was the third collaboration between the Rotman School of Management's Martin Prosperity Institute and the New York Times. Rotman's Institute for Gender and the Economy also helped organize the event.

Kantor was joined by two other Times writers – Emily Steel, who co-authored an investigation into sexual harassment allegations of Fox TV host Bill O'Reilly, and gender editor Jessica Bennett, who started the role a few weeks after the Times published the first Weinstein article. The reporters were led in a panel discussion by Catherine Porter, the Times' Canada bureau chief. 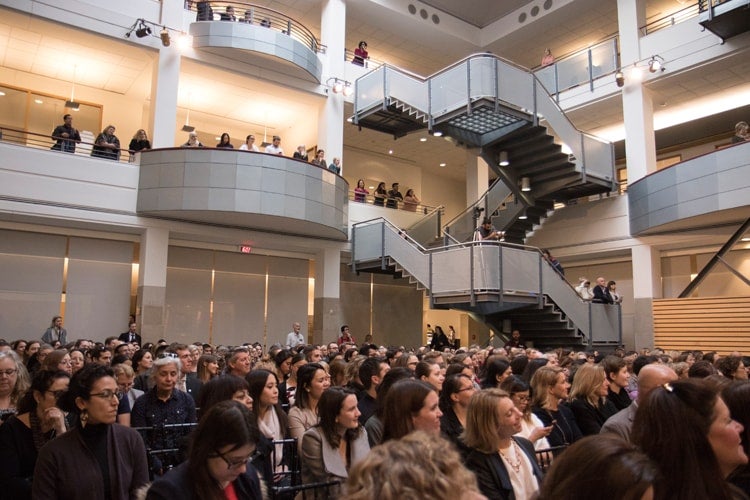 To move beyond previous pitfalls of reporting on sexual harassment, the reporters said they and their editors made extra efforts to bolster women’s stories with evidence.

Steel, who talked to dozens of people for her story, talked about relying on legal documents in cases where women who had accused O'Reilly had signed confidentiality agreements.

“Not only does it create a story based on documents, it's very solid,” she said. “It doesn't get into ‘He said/She said.’ And it really protects your sources too.”

Kantor talked about how the initial article on Weinstein kept repeating the sentence, “There’s evidence this happened.” In all, she and Twohey spoke to 200 people before publishing the article.

“We were writing under legal threat,” she recalled. “Harvey Weinstein was fighting us really hard. He was telling us this stuff had never happened. He was a pretty threatening figure. He had arrayed this team of legal talent, PR talent, handlers and even spies, to try and fight us and refute everything that we were reporting.

“What we were trying to do is build up as much evidence as possible. We didn’t want women's accounts to be vulnerable, to be knocked down.”

The reporting, which Kantor likened to climbing Mount Everest, also led to strategizing how they could get to actresses directly to avoid agents and publicists. They then moved to figuring out thorny questions like, “How do you get Gwyneth Paltrow's phone number? And once you got her on the phone, what are you going to even say to her in the first minutes, so that she doesn't hang up the phone immediately.” 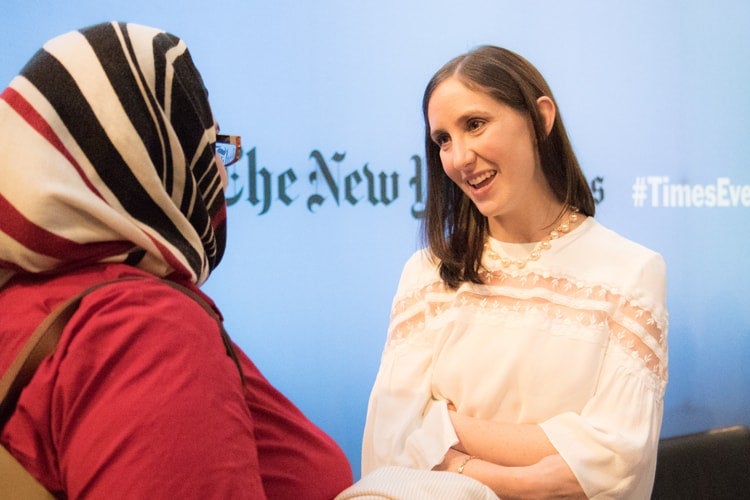 Watching the movement unfold has been fascinating for Bennett, whose work has focused on documenting #MeToo initially with a newsletter and now through the Times' reporting on sexual misconduct. She's watched the high-profile men falling as “dominoes” morph into attention on misconduct in other industries like hospitality, restaurants and factories. The conversation has also moved into issues of sexual consent.

“Clearly the Aziz Ansaris of the world are not the same as the Harvey Weinsteins of the world,” said Bennett.

“Aside from the very important conversations that all of this has opened up with regard to men and women, power in the workplace and sexual harassment. It has also opened a very necessary conversation about sex, about sexual consent, about the way that we communicate those things, and about the way sexual mores and courtship rituals in many cases are very antiquated.”

Kantor added that as a society we're just at the beginning of a long debate about workplace harassment and how to handle complaints and penalties. For her, the #MeToo stories have also led to recognition of what women have known for a very long time: “It’s collective. It’s what women have faced in the workplace – in the U.S., in Canada, globally – for a very long time.”

As she takes a more critical look at what feeds into this kind of misconduct, Bennett remarked that she's beginning to see signs everywhere, from classic songs to James Bond movies, and she's left asking herself, “Can I just no longer enjoy any pop culture?” 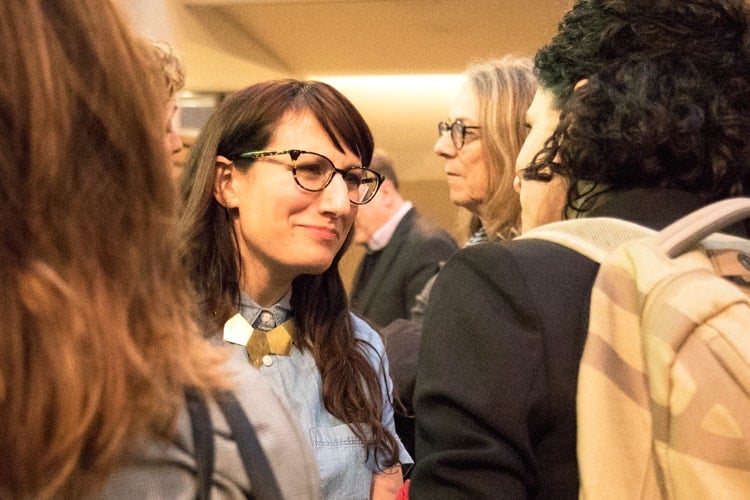