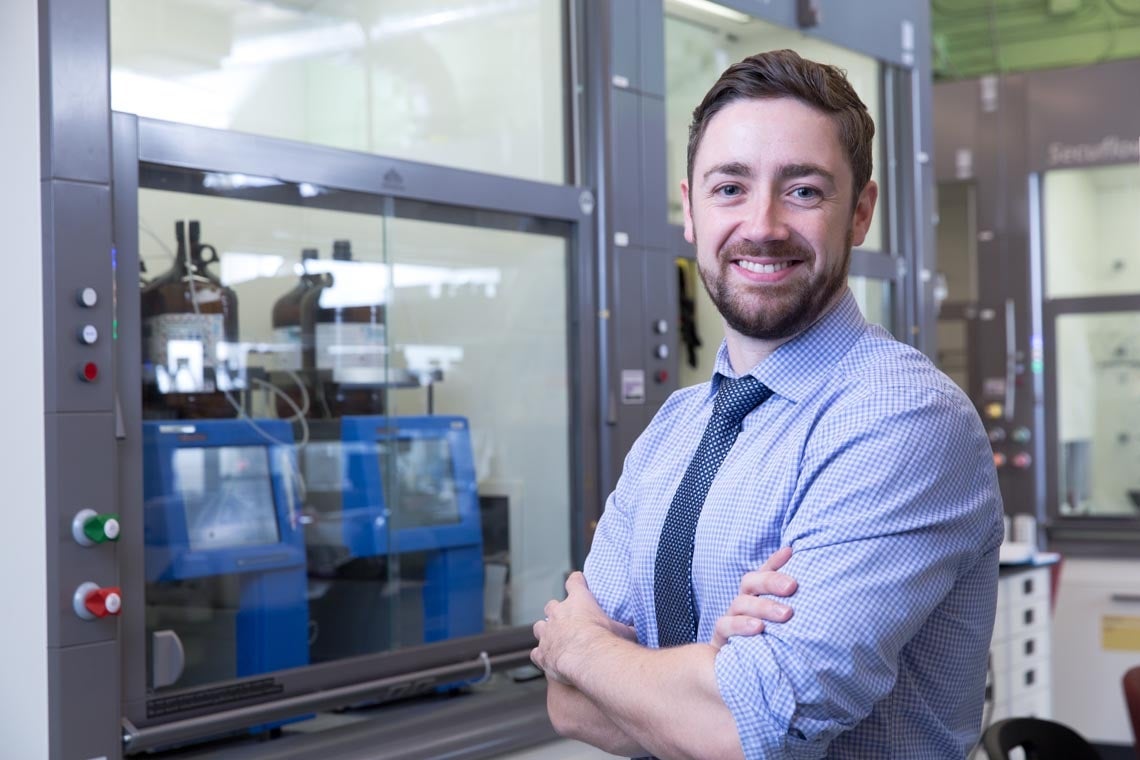 The University of Toronto Mississauga (UTM) is establishing a new interdisciplinary centre for the development of new drugs targeting cancer and other diseases, thanks to a $7-million donation from Mississauga-based Orlando Corporation.

The focus of the new Centre for Medicinal Chemistry will be to create compounds that are purpose-built to interrupt specific biochemical processes while avoiding harm to normal cellular functions. Researchers at the centre will include Patrick Gunning of UTM’s Department of Chemical & Physical Sciences and four new principal investigators who will partner in medicinal chemistry, computational chemistry, cancer biology and stem cell biology.

“On behalf of the entire U of T community, I would like to thank Orlando Corporation for this extraordinary gift,” said U of T President Meric Gertler. “It will add more new talent to the brilliant team led by Professor Gunning, propelling them towards breakthrough innovations with the potential to save countless lives.”

“The Centre for Medicinal Chemistry will play a transformative role on this campus and well beyond our borders,” added Ulrich Krull, interim vice-president and principal of U of T Mississauga. “It will become a research hub of leading Canadian scientists dedicated to developing innovative approaches in the fight against cancer and other diseases. And it will position UTM as a key player in the life sciences sector on an international scale.”

“The research being conducted by Patrick and the Gunning Group has been truly groundbreaking over the past few years,”agreed Vivek Goel, U of T’s vice-president, research and innovation. “The creation of this centre is the logical next step that will help to bring cancer drugs to patients more quickly and efficiently.”

In just the past five years, Gunning and his team have moved four lead compounds to advanced pre-clinical trials. The great promise of this research is to dramatically reduce the time and cost of developing lead compounds, resulting in a much larger pipeline of molecules to fight many forms of cancer as well as other diseases.

“I am profoundly grateful to Orlando Corporation for this incredibly generous investment,” Gunning said. “Through this gift, we have a unique opportunity to dramatically scale the work that has already taken place in our efforts to develop life-saving drugs, and in doing so, also train a cohort of highly-skilled talent in the life sciences.”

“UTM injects over $1.3 billion annually into Peel region, with the bulk of the share going to Mississauga,” Mayor Bonnie Crombie of Mississauga says. “UTM’s rapid growth is proof that Mississauga Council’s unprecedented 10-year-$10-million grant to build the Innovation Complex is working. With plans for the Centre for Medicinal Chemistry, this campus continues to assert its own identity and reputation for research excellence.”

“Orlando Corporation has had a long history of supporting healthcare in the Greater Toronto area and specifically Mississauga,” says Phil King, Orlando’s president. “We are delighted to contribute to the establishment of the Centre for Medicinal Chemistry. The impressive record of the Gunning lab in early research trials promises great things for the future of cancer research. We are pleased to support a centre that will have such a significant impact on the health of so many people around the world.”