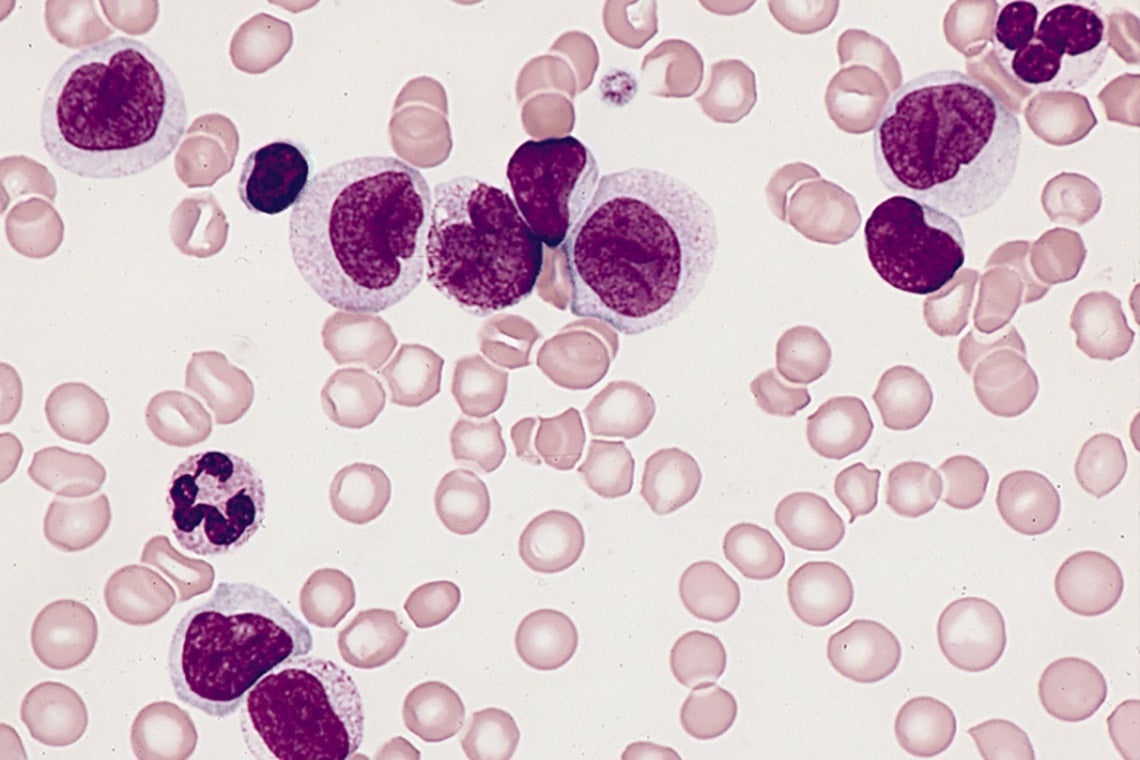 A new test developed by Canadian and Korean scientists and physicians can tell which patients with acute myeloid leukemia (AML) are at risk of relapse – as early as three weeks after they receive treatment.

“In AML, it is very important to predict who is going to relapse,” says Dennis Kim, of the Princess Margaret Cancer Centre at the University Health Network (UHN). The associate professor in U of T’s department of medicine was a co-leader of the study.

“If we are able to identify someone who is at high risk of relapse then we can do therapeutic intervention earlier, which can improve their outcome in the long run.”

The first DNA-based test of its kind, it is administered to patients after they've received a standard course of treatment for AML: chemotherapy, followed by a bone marrow transplant.

“We can detect mutations in patients’ bone marrow cells three weeks after the transplant and based on that predict the likelihood of their relapse,” says Zhaolei Zhang, principal investigator in the University of Toronto’s Donnelly Centre for Cellular and Biomolecular Research and a professor in the departments of molecular genetics and computer science, who co-led the study.

The findings, published recently in the journal Blood, could help doctors improve patient outcomes by changing the treatment before cancer has returned in full force.

AML is the most common type of leukemia in adults, comprising about one-quarter of all cases. It affects the bone marrow, the spongy tissue inside the bone where all blood cells are made. The disease stems from an overproduction of immature blood cells that over time outgrow normal blood cells. It’s a type of cancer that starts suddenly and progresses quickly, requiring urgent treatment.Treatment involves chemotherapy to wipe out the diseased bone marrow, followed by a bone marrow transplant to reconstitute the patient’s blood with cells from a healthy donor.

While most patients go into remission after chemotherapy, about one-third will relapse three to six months after receiving the transplant. Until now, there was no good way to detect the trace amounts of leukemia cells that resisted the treatment and drive relapse. By the time these cells are picked up by available methods, the cancer is usually already at an advanced stage.

Using new DNA sequencing technology called next generation sequencing, or NGS, the team was able to identify the treatment-resistant leukemia cells, or clones, even when they make up a tiny proportion of all cells in the bone marrow. The nature of mutations reveals further clues about how best to target the disease with drugs.

“With our method, not only can we say that this patient will relapse, but we can also say their relapsing clone contains certain mutations which can be a target for therapeutic compounds that can be used to treat the patient,” says Kim.

The researchers then identified DNA mutations that were present at the time of diagnosis and looked for those same mutations at each sampling point. They found that while chemotherapy and bone marrow transplant eliminated most leukemia cells, leading to a reduction in mutation frequency, some initial mutations could still be detected three weeks after the transplant, indicating the presence of treatment-resistant cancer cells. As these same mutations expand in frequency upon relapse, the data suggest that the same cancerous cells that started the leukemia are also responsible for the disease comeback.

Data analysis required Zhang’s team to develop new computational tools to parse the leukemia-driving mutations from the sea of sequence data. This allowed them to identify low residual mutation frequency of 0.2 per cent to use as a surrogate marker for giving a personal chance of relapse.

“Patients who had a mutation burden greater than 0.2 per cent were four times more likely to relapse than patients who had a lower burden or no mutation burden,” says TaeHyung (Simon) Kim, a computer science graduate student in Zhang’s lab who analyzed the data along with Joon Ho Moon, from Kyungpook National University Hospital in Korea, and Jae-Sook Ahn, from Chonnam National University Hwasun Hospital in Korea, who is part of Zhang’s lab as visiting professor.

The researchers hope their DNA-based test will become routine for monitoring disease prognosis although they say this could take five to ten years. In some hospitals, DNA tests are becoming routine for diagnosis of AML, but not for predicting prognosis nor guiding treatment plan.

The research was done as a three-sided collaboration between U of T, UHN and the team led by Hyeoung-Joon Kim, president of the Korean Society of Hematology and a professor in the department of hematology-oncology at the Chonnam National University Hwasun Hospital in the Republic of Korea, who oversaw collection and sequencing of patient samples.

The study was supported by research grants from the Natural Science and Engineering Council of Canada, Leukemia and Lymphoma Society of Canada, Princess Margaret Foundation and National Research Foundation of Korea.