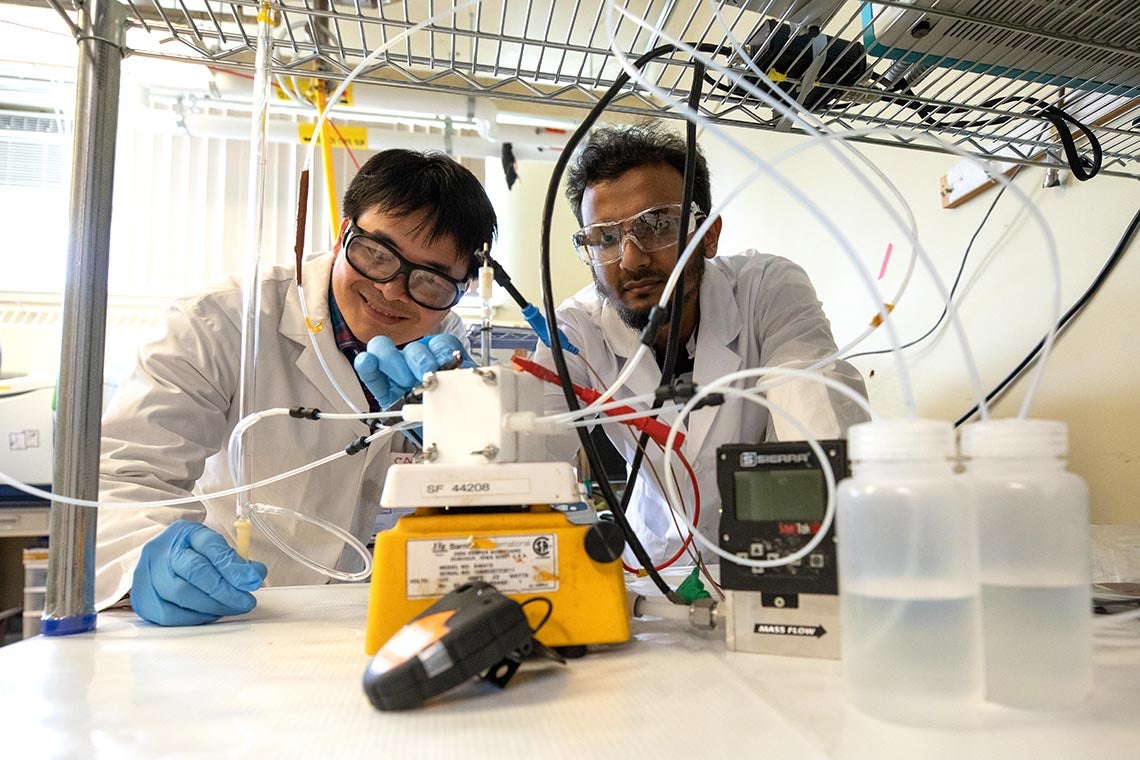 A new technology from the University of Toronto's Faculty of Applied Science & Engineering is taking a substantial step towards enabling manufacturers to create plastics out of two key ingredients: sunshine and pollution.

Today, non-renewable fossil fuels not only provide the raw material from which plastics are made, they are also the fuel burned to power the manufacturing process, producing climate-warming carbon dioxide (CO2). The International Energy Agency estimates the production of the main precursors for plastics is responsible for 1.4 per cent of global CO2 emissions.

A team led by University Professor Ted Sargent of the Edward S. Rogers Sr. department of electrical and computer engineering, is turning this process on its head. They envision capturing CO2 produced by other industrial processes and using renewable electricity – such as solar power – to transform it into ethylene. Ethylene is a common industrial chemical that is a precursor to many plastics, such as those used in grocery bags.

The system addresses a key challenge associated with carbon capture. While technology exists to filter and extract CO2 from flue gases, the substance currently has little economic value that can offset the cost of capturing it – it’s a money-losing proposition. By transforming this carbon into a commercially valuable product like ethylene, the team aims to increase the incentives for companies to invest in carbon capture technology.

At the core of the team’s solution are two innovations: using a counterintuitively thin copper-based catalyst and a reimagined experimental strategy.

“When we performed the CO2 conversion to ethylene in very basic media, we found that our catalyst improved both the energy efficiency and selectivity of the conversion to the highest levels ever recorded,” said post-doctoral researcher Cao-Thang Dinh, the first author on the paper published Thursday in the journal Science. In this context, efficiency means that less electricity is required to accomplish the conversion. The authors then used this knowledge to further improve the catalyst and push the reaction to favour the formation of ethylene, as opposed to other substances.

Next, the team addressed stability, which has long been a challenge with this type of copper-based catalyst. Theoretical modelling shows that basic conditions – that is, high pH levels – are ideal for catalyzing CO2 to ethylene. But under these conditions, most catalysts, and their supports, break down after less than 10 hours.

The team overcame this challenge by altering their experimental setup. Essentially, they deposited their catalyst on a porous support layer made of polytetrafluoroethylene (PTFE, better known as Teflon) and sandwiched their catalyst with carbon on the other side. This new setup protects the support and catalyst from degrading due to the basic solution, and enables it to last 15 times longer than previous catalysts. As an added bonus, this setup also improved efficiency and selectivity further.

“Over the last few decades, we’ve known that operating this reaction under basic conditions would help, but no one knew how to take advantage of that knowledge and transfer it into a practical system,” said Dinh. “We’ve shown how to overcome that challenge.”

Read the research in the journal Science

Currently their system is capable of performing the conversion on a laboratory scale, producing several grams of ethylene at a time. The team’s long-term goal is to scale the technology up to the point where they are able to convert the multiple tonnes of chemicals needed for commercial application.

“We made three simultaneous advances in this work: selectivity, energy-efficiency and stability,” said Sargent, who is also U of T's vice-president international. “As a group, we are strongly motivated to develop technologies that help us realize the global challenge of a carbon-neutral future.”

“Upgrading CO2 to value is the next frontier in renewable energy storage and renewable chemicals,” said Shaffiq Jaffer of TOTAL, a French major energy operator sponsoring this research. “The Toronto breakthrough proves that electricity and waste CO2 can be transformed into valuable chemicals for the petrochemicals sector. The possibility to close the carbon loop in a manner analogous to nature’s photosynthesis is closer to industrial reality today thanks to this advance.”

The multidisciplinary group, which also includes Professor David Sinton, combines strengths in materials science, chemical engineering, chemistry and mechanical engineering, and is providing new perspectives on the field. Several members are also involved in CERT, the University of Toronto team that just advanced to the final round of the NRG COSIA Carbon XPRIZE. The Carbon XPRIZE competition challenges groups from industry and academia to capture carbon emissions from power plants and efficiently convert them into valuable chemical products.