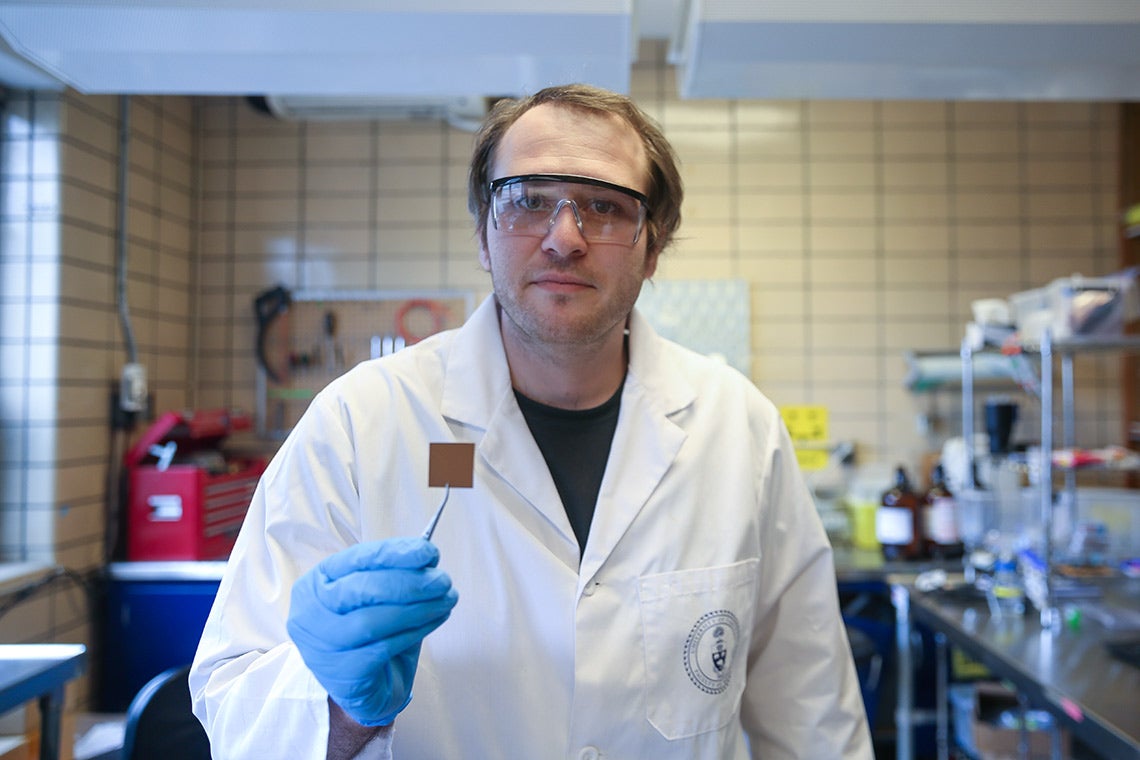 Post-doctoral researcher Adnan Ozden holds up a sample of the new catalyst, which improves the efficiency of reactions that convert captured CO2 into valuable products such as ethanol and ethylene (photo by Aaron Demeter)

A new catalyst design created by researchers at the University of Toronto’s Faculty of Applied Science & Engineering could significantly improve the practicality of an electrochemical process that converts captured carbon dioxide into multi-carbon molecules – some of the key building blocks of the chemical industry.

“We need alternative routes to everyday products that do not require fossil fuel inputs,” says David Sinton, a professor of mechanical and industrial engineering and senior author on a new paper published in Nature Energy.

“With recent advances in carbon capture, there is an opportunity to use CO2 to replace core chemical feedstocks on which the modern world relies. By developing cost-effective ways to upgrade this carbon into products we already need, we can increase the economic incentive to capture, rather than emit, CO2.”

One way to upgrade carbon involves electrochemistry – electricity used to drive forward a desired chemical reaction. The conversion is carried out in devices known as electrolyzers, where electrons combine with the reactants at the surface of a solid catalyst.

The team has a proven track record of successfully developing innovative ways to improve the efficiency of electrochemical CO2 conversion.

In their latest published work, the researchers focused on a variant of the process known as “cascade CO2 reduction.” In this two-step process, CO2 is first dissolved in a liquid electrolyte and then passed through an electrolyzer, where it reacts with electrons to form carbon monoxide (CO).

The CO is then passed through a second electrolyzer where it is converted into two-carbon products such as ethanol, which is commonly used as fuel, and ethylene, which is a precursor to many types of plastics as well as other consumer goods.

It is at this second step where the team found inefficiencies they believed could be overcome. The challenges were related to selectivity, which is the ability to maximize production of the target molecules by reducing the formation of undesirable side products.

“One of the key issues is the poor selectivity under low reactant availability,” says post-doctoral researcher Adnan Ozden, one of four lead authors on the new paper.

“Achieving both in a single-operation mode is the key.” 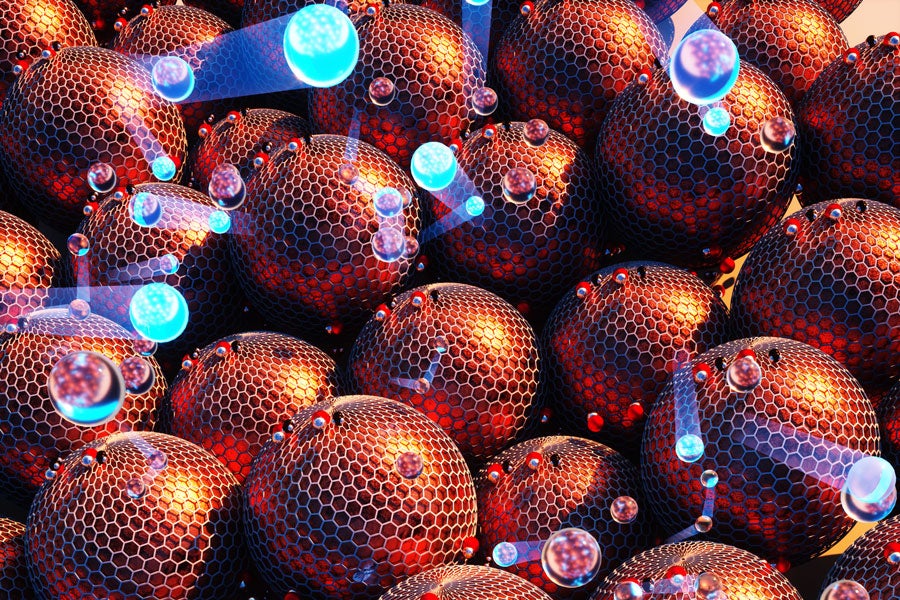 In this schematic of the catalyst design, the large spheres represent copper nanoparticles, which are covered in a honeycomb-like mesh that represents the covalent organic framework. The blue spheres are positively charged cations and the clear ones are negatively charged anions. The coloured molecules on the surface represent the carbon monoxide reactant (CO) and the reaction product, ethylene (image courtesy of Alex Tokarev, Kate Zvorykina from Ella Maru studio)

To overcome this challenge, they took inspiration from the design of supercapacitors, another electrochemical system where the transport of ions is critical. They added a porous material, known as a covalent organic framework, onto the surface of the catalyst, which enabled them to control the transport of cations and anions in the local reaction environment.

Using the new catalyst design, the team built an electrolyzer that converts CO into two-carbon products with 95 per cent carbon efficiency, while also keeping energy efficiency relatively high at 40 per cent.

“When you look at what has been achieved so far in the field, the various approaches have tended to focus either on getting really high energy efficiency, or really high carbon efficiency,” says Ozden. “Our new design shows that it’s possible to break this trade-off.”

There is still more work to be done. For example, while the prototype device maintained its performance for more than 200 hours, it will need to last even longer if it’s to be used industrially. Still, the new strategy shows potential in terms of its ability to improve the value proposition of upgrading captured carbon.

“If this process is going to be adopted commercially, we need to be able to show that we can accomplish the conversion in a way that’s scalable and cost-effective enough to make economic sense,” says Sinton. “I think our approach demonstrates that this is a goal within reach.”