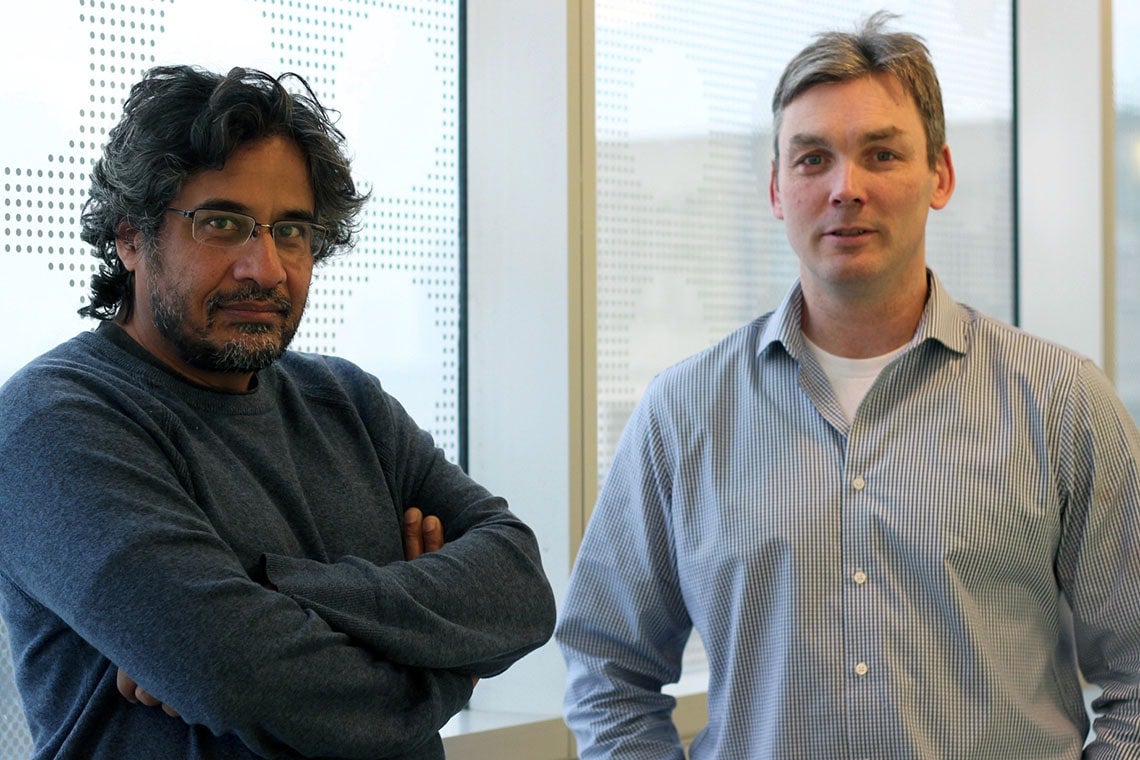 Antibody technology developed by the Donnelly Centre's Sachdev Sidhu (left) and Jason Moffat (right) is being used in Myeloid Tuning, a new form of immunotherapy that aims to enhance to body's ability to fight cancer (photo by Jovana Drinjakovic)

A new therapy that enhances the body’s ability to fight cancer has received a US$62-million boost thanks to the University of Toronto's antibody engineering technology.

Called Myeloid Tuning, the therapy is designed to boost the body’s anti-tumour immunity by removing the cells that normally put brakes on the immune system using engineered antibodies from U of T’s Toronto Recombinant Antibody Centre (TRAC).

“Instead of turning on the immune cells directly, you get rid of the cells that are inhibiting the immune cells,” says Professor Sachdev Sidhu. He co-founded TRAC with Professor Jason Moffat as a state-of-the-art antibody engineering platform at the Donnelly Centre for Cellular and Biomolecular Research, where both are faculty members.

Unlike natural antibodies produced by the immune system to fight disease, engineered antibodies can be designed to target any molecule or cell type and are becoming increasingly used in medicine as a new generation of drugs.

The work that led to Myeloid Tuning started five years ago as a research collaboration between Sidhu and Moffat, both also professors in U of T’s department of molecular genetics, and Professor Max Krummel at the University of California San Francisco (UCSF). Krummel co-invented the first engineered immunotherapy approved in 2011 against skin cancer. Three years later, Sidhu and Krummel co-founded Pionyr Immunotherapeutics in San Francisco to turn their research idea into reality.

“It’s an example of how you can go very quickly, within a few years, from basic research to potential clinical applications,” says Sidhu.

Last month, Pionyr announced it raised US$62 million from investors, bringing its total funding to US$72 million. The funds were raised over two years to develop Myeloid Tuning into a form in which it can be tested on patients. The funding boost came on the back of promising proprietary data obtained with antibodies created in Toronto. So far, Myeloid Tuning has been shown to be effective in multiple mouse tumour models.

Built from the ground up in 2010, TRAC has grown into a sought-after technology platform with more than 50 ongoing collaborations worldwide. Besides Pionyr, there’s also Saksin LifeSciences in India, a startup that is turning TRAC antibodies into new medicines for blindness.

“TRAC has established itself as a premier protein engineering platform attracting partnerships and significant research funding from industry,” says Moffat.

Moffat and Sidhu want to see more new drugs developed in Toronto. That is being made possible thanks to additional support from philanthropist Terrence Donnelly, whose gift 13 years ago helped found the interdisciplinary biomedical research institute that now bears his name. In October, Donnelly announced a new $10-million gift to support research and innovation.

That will enable the Donnelly Centre to soon launch a new hub for biotechnology startups that will accelerate translation of its research discoveries into new therapies. Its first occupants will be Systems Biologics Inc. and SciGenom Life Sciences, Canada, new Canadian corporations that will develop TRAC antibodies into treatments for cancer and other major diseases.

“Pionyr came out of a similar biotech incubator at UCSF. Imagine what we could do if we had one here. We have thousands of high-quality antibodies that are just sitting there waiting to be turned into new drugs,” said Sidhu.