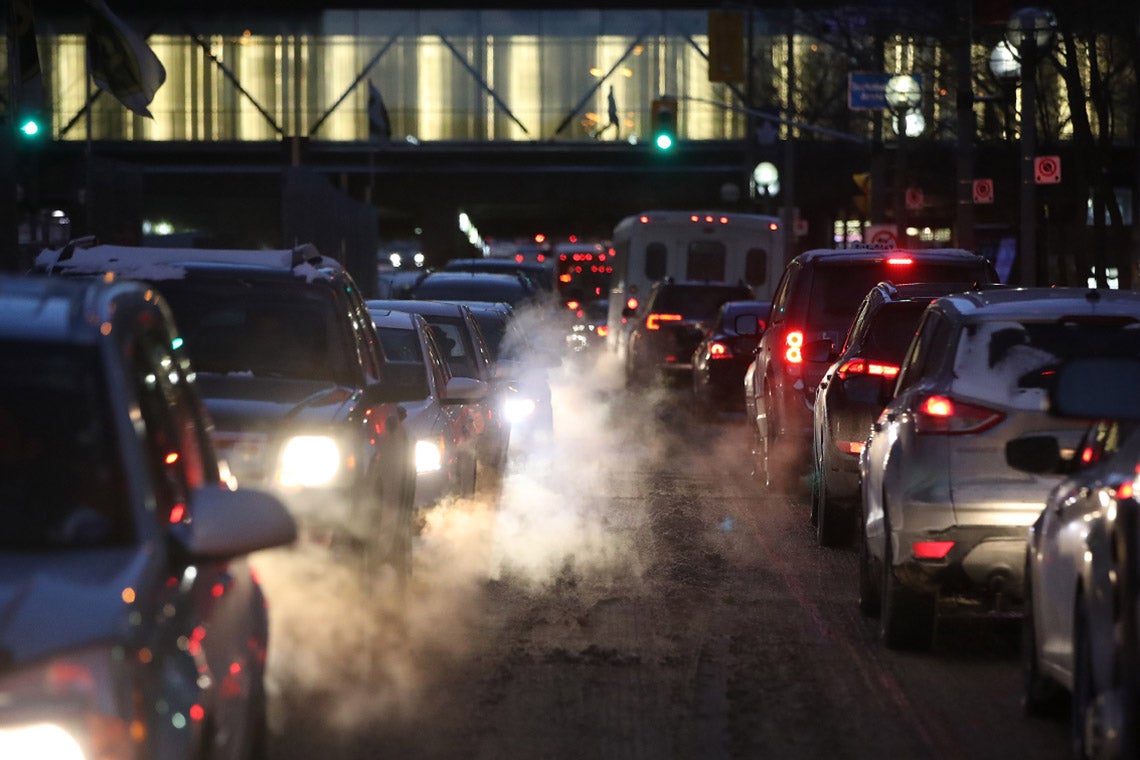 Nearly 30 per cent of Canadians live near major roads and heavy traffic, which a national study led by U of T researchers says are the source of a “soup” of pollutants – particularly during winter (photo by Steve Russell/Toronto Star via Getty Images)

Almost one-third of Canadians live near a major roadway – and this means they go about their everyday lives exposed to a complex mixture of vehicle air pollutants.

A new national study led by researchers at the University of Toronto’s Faculty of Applied Science & Engineering reveals that emissions from nearby traffic can greatly increase concentrations of key air pollutants, with trucks making a major contribution. Canada’s cold winters can also increase emissions while particle emissions from brakes and tires are on the rise.

The report, released today, is the culmination of a two-year study monitoring traffic emissions in Toronto and Vancouver – the two Canadian cities with the highest percentage of residents living near major roads.

“There’s a whole soup of pollutants within traffic emissions,” says Greg Evans, a professor in the department of chemical engineering and applied chemistry who led the study in collaboration with Environment and Climate Change Canada, Ontario’s Ministry of the Environment, Conservation and Parks, and Metro Vancouver.

Evans says that this “soup” of pollutants includes nitrogen oxides, ultra-fine particles, black carbon, metals, carbon monoxide and carbon dioxide. Exposure to these emissions has been associated with a wide range of health issues, including asthma, cancer and cardiovascular mortality.

“The areas of concern we identified raise important questions about the health of Canadians living near major roadways,” says Evans.

The national report’s findings complement a parallel report on air quality in the Vancouver region that will soon be released by Metro Vancouver. Both reports underscore the need to assess and enact new measures to mitigate exposure to air pollutants.

Busy roads are detracting from nearby air quality, especially during morning rush hour.

“These particles are less than 100 nanometres in size, much smaller than red blood cells. They can travel and trans-locate around the body,” says Evans. “We don’t know yet what the health impacts of these particles are, but we do know that near roads they are a good indicator of exposure to traffic pollution.”

The concentrations of most traffic pollutants varied by factors of two to five across the cities.

The report highlights the dangers of diesel trucks, which represent a minority of the total trucks on roads and highways, but emit diesel exhaust at disproportionately high levels.

“If there’s a high proportion of trucks, people who spend a lot of time near these roadways – drivers, workers, residents – are being more exposed to diesel exhaust, which is a recognized human carcinogen,” says Evans.

Though there’s currently no standard for public exposure to diesel exhaust in Canada, black carbon, more commonly called soot, is used to monitor exposure in workplaces. Based on black carbon, the concentrations of diesel exhaust beside the major roads exceeded the guidelines proposed in the Netherlands for workers, implying that they are too high for the public.

“If these highly polluting diesel trucks were repaired, retrofitted, removed or relocated, it would make a significant difference,” says Evans. “You can’t move your nearby schools or homes, but we can do something about these highly-polluting trucks that are a small proportion of the truck traffic, and yet causing a lot of the trouble.”

Air quality is not just a concern during the summer driving season. Winter weather brings an increase in near-road concentrations of nitrogen oxides and ultra-fine particles.

The researchers’ data suggest emission treatment systems on diesel vehicles become less effective at colder temperatures. “The systems appear to not be well designed for cold weather,” says Evans. “It’s concerning when you consider most of Canada faces cold temperatures and long months of winter; Toronto and Vancouver are nowhere near the coldest parts of Canada.”

Wind conditions also affect pollutant levels: The researchers found that concentrations were up to six times higher when monitoring the downwind side of a major road.

As brake pads on cars and trucks are worn down, the materials they’re made of turn to dust – and that dust goes straight into the air.

“These non-tailpipe emissions, from brakes, tires and the road itself, are increasing and we believe that this is because our cars are getting larger and heavier,” says Cheol-Heon Jeong, a senior research associate in Evans’s lab whose analysis revealed the growing issue with non-tailpipe emissions.

“People are buying more trucks and SUVs than small cars and that trend has been growing in recent years. The heavier it is, the more energy it takes to stop, and the more brake dust gets emitted,” he says.

The report concludes by offering recommendations to all levels of government. Evans hopes the report will lead to establishing a nation-wide road pollution research network that can advise policy-makers, engage companies and the public, and lead to standards and laws that will ultimately protect the health of Canadians.

“We’d like to see this report and future studies help launch new monitoring stations across Canada so that all Canadians can get a better picture of the implications of our transportation choices and how these influence what we’re breathing in,” he says.

“Our transportation will be changing very quickly in the coming decade and we’ll need ongoing monitoring to help us stay on a path towards increased sustainability.”

The findings of this report and its recommendations will be discussed at a national meeting in Toronto Nov. 4. The research received support from the Natural Sciences and Engineering Research Council of Canada and Canada Foundation for Innovation.